From Estrangement to Reconciliation

I recently had the honor of serving as a chaplain to a woman named Maggie in the last weeks of her life. In those long, painful days in the hospital, Maggie was constantly surrounded by her three childhood best friends. One day I asked what it was that has kept them so connected. “Well,” sighed one of her friends, “we are so close now because she broke our hearts many years ago.”

The friends had been inseparable since grade school. In their last year of high school, Maggie had become pregnant and shortly thereafter suffered a painful miscarriage. Paralyzed by shame and sadness, Maggie was unable to share her grief with her friends. Instead, she withdrew completely. The friends were deeply hurt, but they refused to let her go. They kept calling, kept wanting a relationship. Slowly Maggie began to share her pain with them and they rebuilt their shattered friendship.

“There is nothing as whole as a broken heart,” said the Kotsker Rebbe (Hasidic rabbi, 1787-1859). It was in healing the brokenness of their relationship that made the friends so close. And it was clinging to the heartbreak within Maggie that allowed them to build a relationship so strong that it could last a lifetime. This healing of past hurts is the process of teshuvah, continually moving closer to one another and to the world by living by our values.

This Shabbat is one of the special weeks of nechemta, comfort, that follow Tisha B’Av, the primary day of communal Jewish mourning. Tisha B’Av marks some of the most profound moments of loss in Jewish history, such as the destruction of the Temples in ancient Jerusalem and the subsequent violent displacement of our people.

It would be tempting to forget the pain and grief that Tisha B’Av marks and obscure the moments of shattering within our Jewish past, just as Maggie, as a young woman, was drawn to hide her brokenness. Yet, it is in the creation of holy spaces, where we can share and name our grief, that the possibility of healing begins. These weeks of nechemta following Tisha B’Av lead directly to the High Holidays when we draw nearer to one another through teshuvah. The healing of the High Holidays is most possible when we first allow our hearts to break in grief on Tisha B’Av.

This week we read Parashat Eikev. In this portion, Moses speaks to the people and reminds them of all the suffering that they experienced on their journey out of Egypt and the way that their relationship with the Divine was shattered over and over again. We read:

Remember, don’t forget, how you brought on the Eternal One’s anger in the wilderness. From the day you left Egypt until you came to this place you have been fighting against the Eternal One. (Deuteronomy 9:7)

Why is Moses reminding them of this history? It seems like on the eve of entering the Promised Land it would be tempting to try to forget. However, as I learned from Maggie, if we don’t first grieve over our losses and acknowledge our broken relations, we cannot begin to heal. The people could only start anew in the Promised Land after naming the pain that brought them there, they could only rebuild their connection with the Divine after recognizing the damage that had been done in that relationship along the way.

Today’s planet has also been shaped by a history of suffering and by damaged relationships. Natural disasters, like the 2008 cyclone that hit Burma leaving nearly 150,000 people dead or missing and one million homeless, remind us that the impact of disasters is not just about nature. It is deeply entrenched in inequality and broken relationships –violence, war, global racism, and an imbalance of wealth — that lay the foundations for tragedy and disaster.

It feels overwhelming to discuss this reality, all the more so to allow ourselves to grieve over the state of the world. But teshuvah, true repair, begins only when we acknowledge the impact of shattered human relations on the life of this planet. This week, as we read Parashat Eikev, may we publicly name all the brokenness of our world in our holiest places — in our homes, our synagogues, and our streets — so that our tears can begin to bring healing and the true wholeness of a broken heart.

Eichah: Where Are We Now?

We should respond to major historical events and to personal decisions with the question, "Where are we morally?"

Cherishing What Is Broken

In this parashah, when the tablets were broken, we picked them up and valued the pieces. 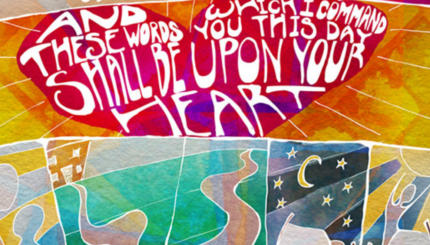