What The Talmud Teaches About Trees

The Hebrew term etz chaim (literally “tree of life”) is a common one in Jewish life, often used to refer to the Torah. It is a popular name for synagogues and Jewish schools as well as the title of one of the major works of Jewish mysticism.

The first reference to the tree of life in Jewish texts comes from the biblical story of the Garden of Eden. Genesis 2:9 relates that God filled the garden with beautiful and tasty trees, and in the middle planted two in particular — the tree of life and the tree of knowledge of good and evil, the latter of which he forbade Adam and Eve to eat.

The tree of life as a metaphor for the Torah comes from the Book of Proverbs, which uses the term three times, the most famous of which is the saying in Proverbs 3:18: Etz chaim hee l’machazikim bah (“She is a tree of life to those who grasp her”). This line, referring to the Torah, is commonly sung in Ashkenazi congregations as the Torah is returned to the ark after public readings.

Proverbs also likens the “fruit of the righteous” (11:30) and a “healing tongue” (15:4) to a tree of life. And the term is the title of a major work of Jewish mysticism by Rabbi Hayim Vital. In the Jewish mystical tradition, the tree of life refers to the well-known diagram illustrating the ten divine emanations.

In modern times, the term continues to be used widely. Many synagogues and Jewish educational institutions are named Etz Chaim. It is also a title of the 2001 Torah translation and commentary published by the Conservative movement. 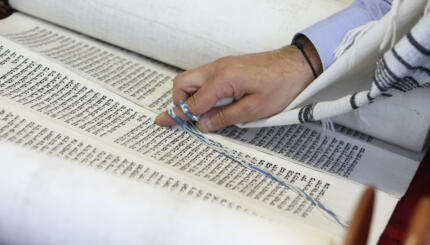 The Torah Blessings: Celebrating the Source of ‘Eternal Life’

The idea that the Torah is alive and ever-changing is encoded in the blessings recited before and after an aliyah.