Tu Bishvat or the “birthday” of all fruit trees, is a minor festival. The name is Hebrew for the 15th of the Hebrew month of Shevat.

In ancient times, Tu Bishvat was merely a date on the calendar that helped Jewish farmers establish exactly when they should bring their fourth-year produce of fruit from recently planted trees to the Temple as first-fruit offerings

In the 16th century, the Kabbalists (mystics) of Tzfat (the city of Safed) in the Land of Israel created a new ritual to celebrate Tu Bishvat called the Feast of Fruits. Modeled on the Passover seder, participants would read selections from the Hebrew Bible and Rabbinic literature, and would eat fruits and nuts traditionally associated with the land of Israel. The Kabbalists also gave a prominent place to almonds in the Tu Bishvat seder , since the almond trees were believed to be the first of all trees in Israel to blossom. Carob, also known as bokser or St. John’s bread, became another popular fruit to eat on Tu Bishvat, since it could survive the long trip from Israel to Jewish communities in Europe. Participants in the kabbalistic seder would also drink four cups of wine: white wine (to symbolize winter), white with some red (a harbinger of the coming of spring); red with some white (early spring) and finally all red (spring and summer).

Complete with biblical and rabbinic readings, these kabbalists produced a Tu Bishvat Haggadah in 1753 called “Pri Etz Hadar” or “Fruit of the Goodly Tree.”

Learn how to lead a Tu Bishvat seder here.

The early Zionists seized upon Tu Bishvat as an opportunity to celebrate their tree-planting efforts to restore the ecology of ancient Israel and as a symbol of renewed growth and flowering of the Jewish people returning to their ancestral homeland.

In modern times, Tu Bishvat continues to be an opportunity for planting trees — in Israel and elsewhere, wherever Jews live. Many American and European Jews observe Tu Bishvat by contributing money to the Jewish National Fund, an organization devoted to reforesting Israel (the purchase of trees in JNF forests is also customary to commemorate a celebration such as a Bar or Bat Mitzvah).

For environmentalists, Tu Bishvat is an ancient and authentic Jewish connection to contemporary ecological issues. The holiday is viewed as an appropriate occasion to educate Jews about their tradition’s advocacy of responsible stewardship of God’s creation, manifested in ecological activism. Tu Bishvat is an opportunity to raise awareness about and to care for the environment through the teaching of Jewish sources celebrating nature. It is also a day to focus on the environmental sensitivity of the Jewish tradition by planting trees wherever Jews may live.

The Tu Bishvat seder has increased in popularity in recent years. Celebrated as a congregational event, the modern Tu Bishvat seder is multi-purpose. While retaining some kabbalistic elements – and still very much a ritual that connects participant to the land of Israel – the seder today is often imbued with an ecological message as well.

Recipes for the birthday of the trees, when it is traditional to eat fruit and nuts. 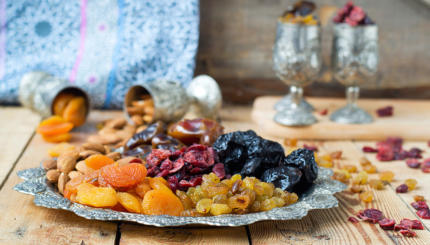 Where to Find a Tu Bishvat Haggadah