For as long as people have organized themselves into civil societies, corruption has placed its thumb on the scales of justice, diverted the flow of essential resources, and helped turn the wheels of power. But while corruption may have indiscriminately left its mark on every age, it is not so even-handed in its distribution today.

In our world of deepening global inequalities, the poorest countries are those most devastated by corruption’s effects. It is not hard to understand why. Institutional corruption forces the impoverished to part with what little they have in order to access basic services like water, electricity, medical care, education, and police protection. Beside the economic burdens, corruption levies a perhaps even more damaging psychological toll, under which ordinary citizens come to feel powerless in the face of corruption’s constant, common debasements.

Testament to the timelessness of corruption’s havoc, the Torah repeatedly exhorts Israel’s leaders to resist venality. Parashat Tzav more subtly communicates this message through the exquisite choreography of the ritual consecrating Aaron and his sons as priests.

The investiture ritual began as Moses assembled Israel at the Tabernacle entrance, where the entire nation, Rashi explains, was miraculously accommodated. Lest they risk their deaths, the priest-initiates were to remain “day and night” at the Tabernacle’s entrance for the duration of the seven-day investiture (Leviticus 8:35).

The metamorphosis of Aaron and his sons into kohanim, or priests, was thus a process wholly transparent to the nation. All of Israel watched as Moses bathed Aaron and his sons. They stood witness as Moses clothed the naked initiates in tunics and girded them with sashes; as he wrapped his nephews’ heads with turbans; as he bedecked his older brother with the urim v’tumim, the jeweled breastplate of the High Priest (Leviticus 8:6-34).

The nation observed Moses instruct the first priests in the korbanot and offer sacrifices to God on their behalf. They looked on as Moses covered Aaron and his sons’ right thumbs, big toes, and ears with sacrificial blood and as he doused their garments with the same gore.

The investiture ritual’s elaborate choreography communicated a powerful sense of mutual responsibility between priest and nation. That the nation witnessed Aaron and his sons laid completely bare and then costumed bit by bit, chastened the priests to remember that critical to their holy transformation was the nation’s intimacy with their humanity. The nation, in turn, was vested with the awesome trust implied in witnessing the initiates change from naked, vulnerable men into God’s–and the people’s–servants.

That the priests’ work was intended to be a selfless devotion, beholden to those whom they served, was also communicated through the investiture’s peculiar pageantry. To both the nation and the initiates, the macabre image of Aaron and his sons, their garments, and extremities covered with sacrificial blood, conveyed a humbling message: Henceforth, the priests’ lives were to be like the korbanot with which they were entrusted–sacrifices to God on the nation’s behalf. The priesthood was emphatically not to be a life of self-aggrandizement and personal profit, but one of service and accountability to others.

While the striking public nature of the investiture and its emphasis on accountability to the community helped define the priesthood in its ideal form, the ritual was performed only this once. The service of later generations of kohanim was not impressed with the investiture’s humbling choreography, and the priesthood eventually did become associated with corruption and avarice.

The holy institution thus tragically succumbed to precisely what the investiture seemed crafted to derail: the powerful tendency of public institutions to become the people’s victimizers, rather than their servants, when transparency and accountability are abandoned.

Entrenched, pervasive corruption has emerged as one of the most serious impediments to progress in the world’s poorest regions. Citing Somalia, Burma, Afghanistan, Haiti, and Sudan among the countries globally perceived as the world’s most corrupt, Transparency International highlights “the fatal link between poverty, failed institutions, and graft.” The organization warns that the persistence of corruption in these countries “amount[s] to an ongoing humanitarian disaster” that affects nearly all aspects of life in these societies.

Today, there are brave individuals around the world who, in their own varied ways, daily reenact Parashat Tzav’s investiture ritual by standing up to corruption. To read their stories, visit Transparency International’s listing of its annual Integrity Awards.

Nearly all of these amazing people have put themselves in grave physical danger for their efforts. Their struggles lend hope that the priestly investiture’s emphasis on transparency and accountability will take root in their own communities and throughout the world. 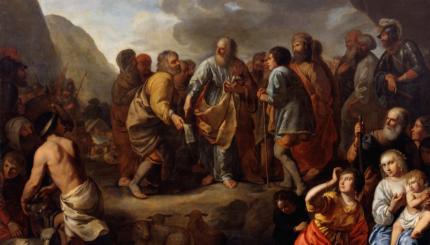 What Moses Learned from His Father-In-Law

The Midianite has concerns about the well-being of the Israelites and their leader Moses.

A Time For Zeal

People who translate zeal for God into violence must normally possess the qualities and ethics worthy of a covenant of peace.

A Role Defined By Service

In a society in which we value democracy and strive to assign leadership based on merit, what can we learn from the priesthood?