The story is told about Franz Kafka that the last time he visited Berlin, he chanced upon a little girl in a park awash in tears. When he inquired as to the reason for her distress, she sobbed that she had lost her doll. Compassionately, Kafka countered that not to be the case. The doll had merely gone on a trip and, in fact, Kafka met her as she was about to leave. He promised that if the little girl would return to the park the next day, he would bring her a letter from her doll. And so Kafka did for several weeks, arriving each morning at the park with a letter for his new friend.

As his tuberculosis worsened, Kafka decided to return to Prague where he would soon die at age 41, but not before buying the girl another doll. Along with the doll came a letter in which Kafka insisted that this was the doll that belonged to his friend. Admittedly, she looked different, but then on her long trip the doll had seen many remarkable sights and gone through many searing experiences. Life had changed her appearance. (Jack Wertheimer, ed., The Uses of Tradition, p. 279).

Of the many meanings in this profound parable I wish to focus on the most obvious: that a transformative experience alters us externally as well as internally. This is the point of the closing narrative of our parashah. The second time that Moses ascends Mount Sinai to get the Ten Commandments–that is after the debacle of the golden calf–the Torah uncharacteristically gives us a profusion of details. In contrast to the brevity of description pertaining to his first ascent (Exodus 19:18-25; 24:1-4;31:18), the Torah now divulges that Moses stayed atop the mountain for 40 days and 40 nights without eating a morsel of bread or drinking a sip of water (34:28).

The intensity of this experience of the divine sets Moses’ face aglow permanently, striking his people with fear. Thereafter, Moses would cover his face with a veil, except when he entered the Tent of Meeting to talk with God or when he addressed the nation (34:29-35).

This exceptional passage is marked by vocabulary equally rare. While the noun keren–meaning “horn”–shows up often in the Tanakh [Bible], the verb karan (same consonants), meaning “to emit rays,” appears only here. Hence the mistranslation by the Vulgate to the effect that Moses came down with horns, a sign of sanctity. Similarly the noun for “veil” masveh, is unique to our narrative. Clearly, subject and language join to underscore the impact on Moses of being in God’s presence for an extended period of time.

The description interfaces with two earlier passages. As the Israelites grow uneasy over the delay in Moses’ return from Mount Sinai the first time, they suspect that he is but an ordinary, fallible mortal (33:1). Aaron, on the other hand, who serves as the Tabernacles’ chief priest, is distinguished by his ornate vestments. The radiance on Moses’ face counters both perceptions. Transformed by his experience, Moses stands out among mortals, a leader without need of special garments. The visible manifestation of his inner state sets him apart from the ordinary or conventional.

The midrash imagines the change to have occurred in one of two ways. One view suggests that God actually touched Moses as he cowered in the crevice of the rock. It was literally God’s hand that shielded Moses as God passed by to give him a glimpse of the divine presence (33:22). The other conjectures that as God instructed Moses atop Mount Sinai, Moses absorbed some of the divine sparks that emanated from God’s mouth (Tanhuma, Ki Tissa, no. 37). Either way, whether by physical or spiritual means, the aftermath of the golden calf effected a lasting transformation in the appearance of Moses.

To be sure, the external is only a reflection of a reality that is internal. Is that not the mark of a great portrait painter like Rembrandt that he makes the face reveal the soul of his subject? Grace should be visible. Thus when we find ourselves in the presence of a truly great scholar of Torah we thank God in a berakhah [blessing] for having endowed someone who fears God with divine wisdom. The labor of a lifetime exudes an aura of equanimity.

On a smaller scale, what happened to Moses is replicated inour own lives each week with the observance of Shabbat, a topic taken up twice in our parashah (31:12-16; 34:21). As the light radiating from Moses’ face attested to his relationship to God, so integrating Shabbat into the rhythm of our lives infuses an extrasensory dimension of existence into our being. Both are a sign signifying the convergence of the holy and profane, of that which is eternal and that which is passing.

Janus-like the Sabbath reminds us of the cataclysms by which God created the cosmos, even as it provides us a tad of a foretaste of the peacefulness that awaits us in the world-to-come. By expressing our reverence in rest, we gain a measure of renewal. The combination of prayer and study, of food, family and friendship imbues us with an expansion of spirit, a veritable extra soul that leaves us only as the Sabbath fades away.

But we enter the work week illuminated and restored with a touch of eternity to carry us through the ordeal of the mundane. At best, the spiritual respite has transfigured our demeanor, like Kafka’s doll. 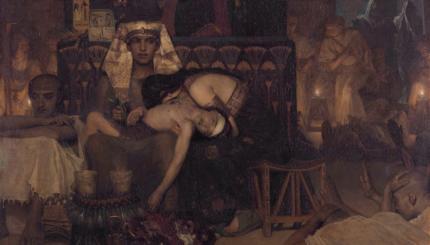 A clash illustrates the fundamental differences between paganism and monotheism.