Contemporary feminism has clearly been a central influence in the recent flourishing of new Jewish rituals, as well as the reclamation and transformation of older ones. Many Jews experience this growing phenomenon as a positive development, one which opens up opportunities for them to feel more personally connected to their religion.

But for traditionalist Jews—most of Orthodoxy, some within the Conservative movement, and even occasional voices in the more liberal denominations–the development of new approaches to ritual can be deeply problematic, raising concerns about the need to follow authentically in the footsteps of our sages, maintain appropriate liturgical conservatism, and focus on the requirements of tradition more than the needs of the individuals—or the influences of contemporary societal norms.

Without question, the traditionally oriented favor the preservation of existing rituals, liturgy, and customs over any ritual innovation. Rabbi Moshe Sofer (1763-1838) of Bratislava, who was known as the Chatam Sofer and is regarded as the one of the greatest Torah scholars of his time, summed it up rather pithily when he declared: “All that is novel (in religious practice) is forbidden by the Torah.”

At the time that he made that statement, he was guiding thousands of religious Jews deeper into the foundations of Jewish law and life, even as the Enlightenment and new Reform movement were taking hold in Europe around them. Traditionalist Jewry at that time felt under siege by these new movements–much as it does today as it confronts the many modern influences which it considers corrosive of Judaism’s core values.

In the view of many traditionalists, feminism is a byproduct of secularism, and its impact on ritual is therefore not authentically Jewish. Totally new rituals which have been clearly inspired by feminist perspectives–like the simchat bat or brit bat, and the simchat chochmah, the celebration of wisdom observed by a growing number of women (and a few men) as they turn 60 and leave middle age for the next stage of their lives–are largely viewed as being completely inauthentic.

Those on the right wing of the traditionalist camp say that women’s desire to find places for their own voices within Judaism reflects their lack of awareness, understanding or appreciation of the beauty of their traditional role, where their influence is centered in the home rather than the synagogue, and in private roles rather than public ones.

On Adding New Rituals and Prayers, and Transforming Old Ones

While welcoming ceremonies for girls are not wholly uncommon within “left wing” Orthodoxy, in many traditionalist circles, the simchat bat or brit bat is seen as an imitation of the brit milah, contravening the traditional view that mere human beings may not add to the list of mitzvot which God has commanded. A brit milah is commanded. A brit bat may seem desirable, but to construe it as a mitzvah—or its rituals as covenantal ones–remains forbidden, or at least highly distasteful.

Some traditionalists are more open to the idea of adapting traditional ritual, like a woman’s monthly immersion in a mikveh, or ritual bath, for new purposes–for example to mark the end of chemotherapy, infertility treatment, or the month after a parent has died (the shloshim).This adaptation is not outright forbidden, says David Weiss HaLivni, scholar of rabbinic texts and professor of religion at Columbia University. But, he says, the basis for the ritual “has to be referred to somewhere in the sources” of Jewish law.

The language of blessings and prayers used in new ceremonies is also of concern to those with a traditional viewpoint. The inherited notion that new blessings may not be invented, as well as a concern about taking the Divine name in vain, raises red flags when new or transformed rituals and ceremonies include new blessings that use the traditional formula of “Barukh Atah—Blessed are You Adonai our God…”, or (on the other hand) use new language and names to refer to God.  Neither of these sits well with those who take seriously the desire avoid invoking God’s name inappropriately, or the notion of a bracha l’vatalah, a “blessing in vain”.

A key question for traditionalists, when it comes to considering the introduction of a new ritual, prayer, or ceremony, is whether its genesis lies in the needs of the community, or the needs of an individual. Invariably, anything emerging out of an individual’s particular need (as new lifecycle rituals, especially at first, are likely to be) is viewed as suspect and as an outgrowth of modern society’s focus on the “self.” Innovations for the benefit of the entire community–like the introduction in recent decades of a prayer for the State of Israel, even into Orthodox worship services–are, at times, more acceptable.

Even those in the traditionalist camp who are most open to the idea of lifecycle ritual innovation warn of risks when laypeople take responsibility for something as serious as a religious ritual into their own, creative hands. Rabbi Yosef Blau, spiritual advisor to the students at Yeshiva University, was once staying in the Jerusalem hotel where a conference of feminist Orthodox Jews was also meeting. Curious, he stopped in on the session devoted to simchat bat.

Those speaking at the session fell into two groups, said Rabbi Blau: those who slightly modified existing rituals to welcome their daughters, and those who created their own.

The problem was that those in the latter category sometimes proposed things that were inappropriate or even highly problematic, because of the speakers’ “lack of full halakhic sophistication,” said Rabbi Blau.  He cited as an example what he perceived as a misuse of the word kiddush (which refers to the sanctification of Shabbat or a holiday recited over a cup of wine or grape juice) to refer to an original blessing that one woman composed and recited at her daughter’s simchat bat.

The misapplication or misunderstanding of a required ritual, like kiddush (which technically belongs on the Sabbath and festivals), devalues its holiness, say traditionalists. “It’s a balance between tradition and creativity. Of course, everyone balances a little differently,” says Rabbi Blau. But traditionalists see themselves “as part of something”: a long and honorable tradition.

“[Contemporary traditionalists] don’t see ourselves in isolation, but as part of a historical continuum,” he says. “And we want to maintain our continuity.”

Despite the relative newness and great varieties of welcoming ceremonies for girls, a basic structure appears to have emerged.

Planning a ceremony when your family is multi-faith or multi-cultural. 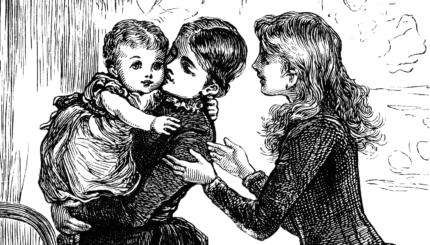