Here’s part of the Exodus story they didn’t teach in Hebrew school: Exodus, Chapter Four. Moses, in Midian, has encountered God at the burning bush, received his commission, and is on his way back to Egypt. Then this:

Now it was on the journey, at the night-camp, that God encountered him and sought to make him die. Tzippora took a flint and cut off her son’s foreskin, she touched it to his legs and said: Indeed, a bridegroom of blood are you to me! Thereupon he released him. Then she said, “a bridegroom of blood” because of the circumcision. (Exodus 4:24-26)

An amazing story. It reads like a passage from Genesis; it has that mythic, mysterious quality. I think of Isaac, meditating in the fields. This is the kind of story that could have happened to him.

Experiences of Moses and Isaac

In fact this kind of story did happen to him, when he was bound on the altar. How alike were their experiences, Moses and Isaac: God wanted to kill each of them and they didn’t know why, and somehow a substitute suffices. Yet their subsequent lives are anything but similar. Isaac is crippled by the experience: passive and unable to understand his children, the Bible tells us that God is his Terror (Gen. 31:42, 53) and he ends his days blind and duped. Moses goes on to be the friend of God, and when he dies “his eyes were undimmed and his vigor unabated.” (Deuteronomy 34:12)

Moses’ ability to emerge whole has less to do with who he was when God came upon him, than with what he was doing. Or rather, where he was going. Moses was on his way to free a people, and it was this mission which supported him through the terror. More broadly, there is something about liberating other people that affects one’s relationship with God.

Because other people are really not that Other. We are like each other, because we are in part like God: we are created in God’s image, and in each of us is a part of God. God is not so much interested in the way we treat each other, but rather implicated.

In his book The Prophets, Rabbi Abraham Joshua Heschel wrote: “Justice is not…a value, but a transcendent demand, freighted with divine concern. It is not only a relationship between man and man, it is an act involving God, a divine need…Its validity is not only universal, but also eternal, independent of will and experience.”

“A divine need.” Moses isn’t crippled by God because he’s helping to redeem God. God doesn’t become Moses’ terror because God is already Moses’ cause. The act of liberation allows Moses to live with a frightening God, even an apparently demonic God, because the act of liberation is about God.

All oppression is a desecration of the divine image, a hillul HaShem: in Baghdad, or in Addis Ababa, or in the Sudan, or in Gaza. This is threatening to us, and rightfully so. Not because of the enormity of the obligation it imposes; we have plenty of obligations which we rarely meet. It’s threatening for the simple reason that oppression is bad for the oppressed. It warps their souls, filling them with a bitterness and violence and hate that is not always directed at the oppressors. The duty to free the oppressed is threatening because it means living with them, and at best that can be a dangerous prospect.

Moses knew that. After all, what was Moses’ experience of the Israelite slaves, even after he had demonstrated where his sympathies lay?

He went out again on the next day, and here: two Hebrew men fighting! He said to the guilty-one: For-what-reason do you strike your fellow? He said: Who made you chief and judge over us? Do you mean to kill me as you killed the Egyptian? (Exodus 2:13-14)

Nevertheless, the danger is real. But as is increasingly clear, the world is dangerous whatever we do. We all experience the terrifying nature of the world, and we know it threatens us unjustly. But Martin Buber had something to say about that terror, as he meditated on the ambush at the night camp:

If a power attacks a man and threatens him, it is proper to recognize God in it or behind it, no matter how nocturnally dread and cruel it may be…

There is no danger, he says, that is outside of God, and so the experience of living in a threatening world is the experience of God wanting to kill you; it is the terror of looking up at the knife and knowing that it was God’s command that brought you to the altar.

And so we cannot escape that terror–we are, after all, Isaac’s children. We can survive it, though; we can deal with the danger, and know it, and not be crippled by it. For while we must be Isaac’s children, we can choose to become Moses’ disciples. 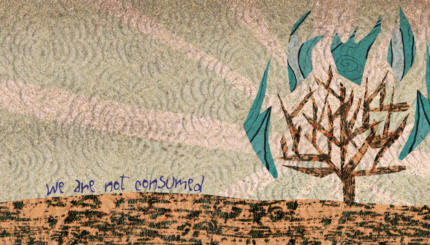