Ha Lachma Anya: The Bread of Slavery and Affliction

Dayenu: A Jewish Template for Gratitude

The first (and shortest) summary of the hours-long storytelling session we call the Passover seder is found in the Mishnah Pesachim 10:4: “… a father should teach his son based on the needs and knowledge of the son; he shall begin with disgrace and end with joyful praise; he shall begin with ‘my father was an Aramean slave,’ and then complete the entire story…”

According to the Mishnah, fathers are obliged to tell their sons the story of the Exodus. Yet one direction has to be followed: The story must begin with disgrace and end with praise — that is, the story must start with the hardship of Israelite enslavement in Egypt and conclude with a song of praise and joy.

In our Haggadah, the Mishnah’s instruction is transformed into a ritual script that is read and enacted each year around the seder table. First we tell each other the story of the Exodus (the Maggid section of the Haggadah), which concludes with two joyful psalms (113 and 114). Then we eat the Passover meal, say Birkat Hamazon (Grace After Meals), and end the night with more psalms (115-118; 136) and other songs of joyful praise. The entire corpus of psalms sung around the seder table makes up the Hallel Hagadol (“The Great Praise”) that the rabbis reserved especially for this occasion.

The arc “from disgrace to praise” seems to be perfectly implemented. The seder begins with a story about disgrace, and ends with praising God.

A slightly different theology is embedded in other historical seders. They don’t begin with narrating a story of the past — instead, they begin in the present and look to the future.

In addition to the Passover seder, the rabbis also created a Rosh Hashanah seder, based on the symbolism of specific vegetables and fruit Horayot 12a, with which they blessed the coming year so well that it would only turn out great. The kabbalists added the seder Tu Bishvat.

Both of these rituals were conceptualized not as occasions to tell a story “from disgrace to praise,” but as actual healing experiences. The rabbis believed that God was sending them signs, and that seeking them out would give them power over the course of future events. The kabbalists believed that their actions in this world would impact another, godly world, and ultimately lead to redemption. The rituals of these seders were supposed to transform the lives of the participants — and, in the case of the kabbalists, also the “life” of the upper world.

The various contemporary versions of the seder crafted in recent decades are mergers of these two patterns, while ending with a new appeal. Today, there are feminist seders, ecological seders, and political seders. Based on the formula “from disgrace to praise,” these new rituals replace the Exodus story with another foundational story, telling a tale of survival, victory, and/or redemption. Then they focus on a less-than-perfect present. Very often, they end with a strong appeal to carry on the work of repairing the world.

The Passover seder as we have it today also merges these two patterns—moving from the disgrace of enslavement to praise of God, while also acknowledging a less-than-perfect present and the ongoing work of redemption. But to see it, we have to have a closer look into our Haggadah.

The telling of the Exodus story concludes with two psalms recalling creation and the Exodus (113 and 114). The concluding section of the seder, the psalms sung after the meal (115-118; 136), acknowledges these miracles and expresses praise to the God who, in the past, created and redeemed us from enslavement. Yet the language of the latter psalms expresses a clear sense of the present as not yet redeemed, but still awaiting redemption.

“Bring glory for the sake of Your love and Your faithfulness,” we read in Psalm 115. Glory is not here yet. “Open the gates of victory for me, that I may enter them and praise God,” says Psalm 118. The gates, the psalm is suggesting, are closed still. Singing these psalms, we do give praise, but we also beg and plead and look toward a future in which complete redemption — the establishment of justice and the ingathering of the exiled — still await us.

This closer reading of the seder narrative seems to teach us several things: First, our Jewish story is one of light as well as darkness, and it has not ended yet. Second, just as we begin the Passover story by recalling the enslavement of the past, we must conclude it by acknowledging that we are still enslaved in one way or another. Complete redemption will only come in the future. Finally, we ought to remain hopeful and humble, patient with ourselves and with others. It is not us that will bring redemption, but God.

Today, we often forget this. We tell the story of the Exodus, enjoy a meal — and that’s it. Those who miss the theological message of the concluding psalms — or who skip them altogether — not only omit the great praise of God, but also miss the sense of deep humility and great hope that the rabbis encapsulated in the concluding segment.

The ancient arc of the Passover seder asks us to tell the story of changes and accomplishments of the past and asks us to express gratitude for them. It asks us to acknowledge the difficulties of the present and share blessing and prayers for the future—while being aware of our own limitations.

Seders which allow for a sense of our unredeemed present and some messianic hope might be a bit quieter and a bit less joyful. But they might also teach us to look with gratitude to the past, with patience to the present, and with hope to the future.

Rabbi Sonja Pilz is the editor of the CCAR Press.

The first seder is on Friday, March 30. 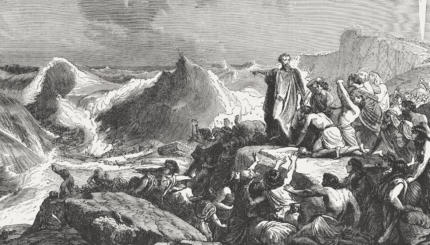 Is the Passover Story Eternal?

A debate among the ancient rabbis speaks to a stark difference of opinion about the operation of Jewish memory.