In Parashat Noach God destroys all of humanity, save for Noah and his family, in a great flood. The text provides us with a reason for God’s wrath —va’timale ha’aretz hamas, that the earth was filled with violence. A simple reading may bring to mind a brutish anarchic existence, in which people fight, steal and destroy without restraint. Indeed, various rabbinic interpretations explain hamas as connoting theft, murder, sexual sins and kidnapping.

Were The Sins So Bad?

One midrashic source, however, proposes that the crimes of the generation of the flood were in fact cunningly small: “If a countryman brought a basket of vegetables to market, they would edge up to it, one after the other, and abstract a bit, each in itself of petty value.” We might assume theft, especially this kind of petty theft, to be the product of a culture of scarcity, where fierce competition for resources encourages some individuals to take from others.

Perhaps surprisingly then, the Rabbis insist that the moral depravity of the generation of the flood was due to prevalent abundance and plenty. We learn that “as a consequence of their extraordinary prosperity, they grew insolent…A single sowing bore a harvest sufficient for the needs of forty years.”

In addition to the nature of the sin, an interesting feature of the Noah narrative is the extended wait between God’s warning of imminent destruction and the moment flood waters engulfed the earth. Commanded to build an ark, Noah plants the trees that will be used as wood, taking 120 years to complete the construction. This painstakingly slow building regimen was intended to serve as a warning sign. Rashi writes that passersby would ask, “What is this of yours?” And he [Noah] would say to them: “In the future God will bring a flood to the world, [thinking] maybe they will repent.”

With the aid of the midrash, we have a fascinating picture of the generation of the flood. Firstly, society was in a crisis caused by the cumulative effect of seemingly insignificant individual acts; secondly, prosperity and abundance were the root of their societal malaise; and thirdly, the punishment for their actions–a destructive flood–was slow in coming, allowing adequate time for them to change their ways.

This reading of the Noah story provides a striking parallel to our own society in the midst of a global climate-change crisis. No single act of environmental sin or indifference has caused the Earth to heat up; rather, it is the combined effect of billions of small actions across the globe. Similarly, our affluence and our ability to harness and control the Earth’s resources, which have enabled the scale of consumption that has altered our atmosphere, are the prime cause of our destruction. And as with the generation of the flood, the waters are rising around us slowly; we still have time to examine our actions and change them.

It is important then to point out that climate change is as much a social justice issue as it is an environmental problem. Like most crises, the impact of climate change is felt most acutely by the most vulnerable in society. A small rise in sea level has had little impact on most of us, but it has already caused villagers on the far-flung Pacific islands of Kiribati, elevation six feet, to become environmental refugees.

On other Pacific islands, and in low-lying areas across the globe, arable land is being lost to the ocean, or becoming unusable due to salinity. This in turn endangers the food security of the local population. Of course, flooding is only one aspect of climate change that farmers must contend with—even a slight change in regional temperature can cause an entire crop to fail. It is a cruel irony that people whose own carbon footprint is small, such as subsistence farmers and fisherfolk, are most affected by a problem caused largely by the West.

What can we do to stop the flood that threatens our generation? We must first recognize that climate change is a large and complex problem and face our own culpability, as both individuals and a society. The Jewish Climate Change Campaign aims to act as a resource in educating and provoking change in individuals, institutions and communities. Visitors to the site can see what efforts others are making and can contribute their own ideas.

In addition to making changes in our own lives, we can also support organizations working to protect vulnerable people and communities that have already been adversely affected by climate change. The Lambi Fund, an AJWS grantee, helps Haitian villagers cope with extreme weather conditions and the impact of environmental degradation.  Last year, Lambi’s staff responded to the multiple hurricanes by helping farmers to plant crops and trees that will protect shorelines from future storms.

In this week’s Haftarah the floodwaters are called mei Noah, the waters of Noah, suggesting that although he was sufficiently righteous to be saved, Noah still bore some kind of responsibility for the destruction by not doing enough himself to prevent it. While our generation does not have the option of retreating to an ark, we do have a chance, and an obligation, to prevent the next flood. 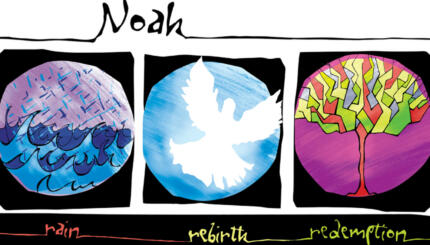 The story of the flood is an object lesson in the kinds of crimes that pose existential social threats.