The fast day of the 10th of the Hebrew month of Tevet symbolizes the first of a series of events which led to the destruction of the First Temple: the beginning of the siege of the Babylonians on Jerusalem, the capital city of Judea, as the Book of Kings relates:

Zedekiah rebelled against the king of Babylon. And in the ninth year of his reign, on the 10th day of the 10th month Nebuchadnezzar moved against Jerusalem with his whole army. He besieged it; and they built towers against it all around. The city continued in a state of siege until the 11th year of King Zedekiah. (Kings II, 25 verse 1-2)

The prophet Yeheskel [Ezekiel] was instructed by God to turn this day into a day of memory:

“O mortal, record this date, this exact day; for this very day the king of Babylon has laid siege to Jerusalem”  (Yeheskel 24, verse 2).

Later on, additional memorial days commemorating events of mourning were connected to the Tenth of Tevet, which was named by the prophet Zechariah as “the fast of the 10th month” (Zechariah 8, Verse 19).

It was on the fifth of Tevet when Yeheskel, together with the Jewish community forced into Babylonian  exile, received news of the destruction of Jerusalem: “In the 12th year of our exile, on the fifth day of the 10th month, a fugitive came to me from Jerusalem and reported, ‘The city has fallen’ ” (Yeheskel 33, verse 21). The Babylonian Talmud  in Rosh Hashanah tractate 18B even purports that the fast should be held on the fifth of Tevet and not on the 10th: “And they equated receipt of the report of the destruction with that of Jerusalem’s burning.”

Two other events which are related to the first days of Tevet are the completionof the translation of the Torah into Greek on the Eighth of Tevet by the “Seventy Scholars” in the days of Ptolemy and the death of Ezra on the ninth of Tevet.

The public fasts associated with the Temple’s destruction, among them the Tenth of Tevet, are part of recent research known as the “Memory Place.” The term “Memory Place,” attributed to the French historian Pierre Nora, includes not only spatial but temporal places as well, i.e. days of commemoration around the calendar. Those days, like the physical monuments, help the collective–in our case the Jewish people–to preserve the memory of formative events in its past, which are meaningful for its future.

The “Memory Place” creates an encounter between the individual and the collective and the commemorated object, event, or symbol. This encounter disturbs the daily routine, which, because of its nature, encourages forgetfulness. Like a person who encounters the past by passing from time to time by a physical monument in his neighborhood or visiting a memorial, the past is also encountered  when the person faces the temporal “Memory Place” on the calendar. This encounter is cyclic by its nature and with it, the person reflects about the past event, and in a way, even experiences it every year.

The Jewish people, deprived of state life or sovereignty over their land for many generations, could not develop a  widespread tradition of physical memory sites. Although we had the Western Wall, the tomb of Rachel, Ma’arat  HaMahpela (the burial plot of our Jewish matriarchs and patriarchs located in Hebron), and some other sites associated with events and personalities from the past, the Jewish “memory culture” developed much more extensively through use of temporal places of memory built around the calendar.

In the first layer of these “Memory Places” we find the three holidays of Passover, Shavuot, and Sukkot, which mark historical events and experiences. Later on they were joined by Hanukkah and Purim as well as by the public fasts that commemorate national catastrophes. Scattered around the world, Jews nevertheless gathered “temporally” from time to time in their respective places of residence to mark national memories and to re-experience a piece of their collective past.

In his discussion on the public fasts which commemorate the Temple’s destruction, Maimonides presents the following:

There are days in which all the people of Israel fast to repent the misfortunes which befell them. The fasting will serve as a reminder of our bad deeds and the deeds of our fathers which have caused us hard times. Remembering our misguided ways gives us the opportunity to be better people…”  (Maimonides, Mishneh Torah, Hilchot Taaniot, Chapter 5, 1)

Historical memory, as it is demonstrated in commemorative days like the Tenth of Tevet, has at least two dimensions: the story and its lesson. The “story” allows us to remember time and again what happened on that day–the beginning of the Babylonian siege on Jerusalem, in our case. The “lesson” has to do with the meaning we apply to the story: why it happened, how it relates to us, and what we are bidden to do.

Maimonides draws a link between the deeds of our fathers and our own deeds (i.e., “in every generation”), as well as between our troubles and their misfortunes, thus making the memory of the Temple’s destruction an actual one. From this starting point, he reaches the conclusion to be made from our misconduct: Remembering our misguided ways provides the path to self-improvement.

The relevance of past catastrophes for our own present and the way in which “striving to be better people” are comprehended in every generation is a function of “if” and “how” the community feels about the connection between past catastrophes and present problems and challenges. Thus, the tradition that allows for the abolition of all public fasts in a utopianfuture (Maimonides, Mishneh Torah, Hilchot Taaniot, Chapter 5, 18) opened the door for those who could claim that in their present generation abolishing the fasts was justified.

Such thought surfaced especially during the era of Emancipation in Western and Central Europe, when some Jews felt that in getting “out of the Ghetto” they actually experienced the coming of the Messiah. Thus, some of them claimed it was time to cancel all public fasts. There was even an initiative to turn Tisha B’av [the fast commemorating the destruction of the Temples] into a holiday of emancipation.

The Zionist worldview, which is based on the aspiration to renew Jewish sovereignty in the land of Israel, allows a hallowed place for the memory of old Jerusalem’s destruction. Zionist activists, religious and secular alike, have also granted a new meaning to the words “Remembering allows us to be better people.” The lesson our Zionist forefathers took from the destruction of Jerusalem was not one of “returning to God’s commandments and the fear of God,” but rather the renewal of inter-Jewish solidarity and the assumption of responsibility for the life and future of the Jewish community.

Although the Zionist vision, realized in the establishment of Israel, prompted certain Jewish circles to perceive the era as the beginning of the Geula (redemption), traditional fast days were not canceled in the young state. Although most understood that the Geula would not be fulfilled until all outstanding problems were resolved and the majority of Jews were living in Israel, more important was the fresh memory of the Holocaust, which gave new meaning to Jewish traditional fasts and mourning traditions.

In this context, the Tenth of Tevet acquired heightened significance. Based on the Talmudic tradition that “Bad things come to pass on an unlucky day” (Babylonian Talmud, Taanit Tractate, 29A), it was decided to turn the Tenth of Tevet into a religious memorial day for Shoah (Holocaust) victims. On the Tenth of Tevet, Tashat (1949), the Israeli Chief Rabbi Untermann declared that “the day on which the first hurban (destruction) commenced should become a memorial day also for the last hurban,” and two years later (1951) the rabbinate decided officially to turn this day into a memorial day for Shoah victims whose date of death is unknown.

It was decided that every household should light a Ner Zikharon (memorial candle) to memorialize the Tenth of Tevet.

An attempt was even made to turn Jerusalem’s Mount Zion into the central memorial for all Holocaust victims. A few years later, Israel’s Knesset passed a law which decreed that Yom Hashoah (Holocaust Memorial Day) would be commemorated each year on the 27th of Nissan, which marked the Warsaw Ghetto uprising and the Yad Vashem law [establishing Israel’s Holocaust museum]. Both laws created new and more secular Israeli “Memory Places” for the Holocaust. Still, the Tenth of Tevet remains closely associated with the Shoah. It is recognized as the “General Kaddish Day” when all those victims whose actual date of death is unknown are commemorated in synagogues.

Reprinted with permission from the website of the Schechter Institute of Jewish Studies in Jerusalem.

Today is the 10th of Tevet, a minor fast day that symbolizes the first of a series of events which ... 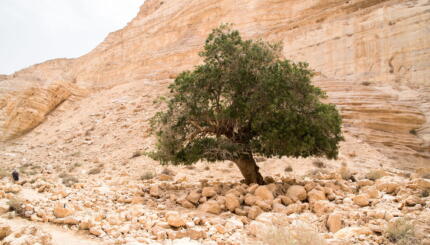 The four minor fast days are not as restrictive as Yom Kippur and Tisha B'Av.