Although Torah gave it the same status as the other pilgrimages, Sukkot became the predominant agricultural celebration. Reference to HeChag —The Festival — only meant Sukkot, and the biblical books covering the period of Israel’s independent kingdom mention this holiday more than any others. Having finished their work for the year, the peasant pilgrims did not have to rush home to tend crops and with peace of mind could tarry in Jerusalem. Consequently, the festival became known as Zeman Simchateinu, the Season of Our Rejoicing.

Even before there was a Temple in Jerusalem (the designated site of festivals before God), the Israelites made pilgrimages to sanctuaries in other locales, such as Shiloh (Judges 21:19‑21; 1 Samuel 1:3). When Solomon completed his Temple (955 B.C.E.) the very first observance held there was celebration of Sukkot, with which the dedication coincided. The focal point for pilgrimage shifted to the capital, and within a few centuries, provincial altars were abolished.

Getting everyone away from local pagan harvest rites to a common Israelite celebration gave the religious leaders at least a fighting chance to appropriately direct the level of joy, although being in the holiest place in the kingdom was still no guarantee. Two hundred years after Solomon’s reign, the prophets Isaiah, Amos, and Hosea observed that the overzealous pilgrims marching in sacred procession, singing hymns, and playing musical instruments in praise of God often overindulged, creating the atmosphere of a bacchanalia. The prophets’ protests about the drunkenness and disorderly behavior did not stop the Jews. Exile did.

During their sojourn in Babylon (beginning in the sixth century B.C.E.), Sukkot was suspended. It was, after all, a holiday tied to the Israelites’ territorial sovereignty and the Land’s agricultural abundance. Without them, there was not much reason to celebrate.

When the displaced returned to Palestine in the next century, they enthusiastically embraced the Torah commandments about Sukkot that were read to them on Rosh Hashanah by Ezra. The newly motivated Israelites ran out to get olive, pine, myrtle, palm, and other leafy branches for construction of their temporary shelters, which they set in every available space, public and private. Nehemiah observed that “the whole community that returned from captivity made and dwelled in booths” (8:17), which they had not done since the generation of Joshua, the first to inhabit the Land. (He may have been referring to the extent of celebration or use of certain materials rather than the ritual of booths itself.)

Even though the Jews were back on their own ground, the rabbis recognized the need to refocus this land‑oriented festival. As with other annual events, Sukkot was separated from its physical aspects of agriculture, nature, and the seasons. Instead, its religious, moral, and nationalistic content was stressed.

Torah had provided a means for spiritual rejuvenation of the landed Jewish nation, at least once every seven years (Deuteronomy 31:10‑13). On the second day of Sukkot at the end of each sabbatical year, all the people were to gather for a public reading of Deuteronomy, the Torah book that reviews the laws of Israel. The priests blew trumpets throughout Jerusalem to summon all, including women and particularly children, who would be influenced by what they heard for the rest of their lives. Surrounded by the populace, the king sat on a large wooden platform erected in the Temple’s Women’s Court and read aloud. In reviewing their responsibilities and duties, this ceremony, called Hokheil (gathering), was a source of inspiration for the assembled.

Sukkot in the Second Temple Era

After the connection to the Land had been minimized and Pesach overtook Sukkot as the greatest Jewish holiday, Sukkot retained its joyousness and appeal. As described in Flavius Josephus’ Jewish Antiquities(which includes reports of Sukkot celebrations in particular years) and the Talmud (which in addition to references scattered throughout has a tractate, Sukkah, devoted to the holiday), pilgrims came from throughout the Land of Israel and every Jewish community in the world. Gathering in regional centers for the trip, in colorful caravans the set out by chariot donkey, camel, boat (as far as the Mediterranean shore), and most often on foot (as the great Hillel is said to have done from Babylon, a journey of two weeks). Although the commandment obligates only men, entire peasant households trav­eled.

Once in Jerusalem, which was festive in garlands olive palm, and willow branches, fragrant with and flowers, they participated in prayers, hymns and singing and watched religious proces­sions in the Temple. The four species (definitively identified through Oral Tradition as palm, willow, and myrtle bound together into a lulav, and an etrog [citron]) were now part of the ritual: Each day of Sukkot, the priests, holding the lulav and etrog in hand, marched around the altar, which had been adorned with freshly cut willow branches. As they circled, they recited a psalm asking God to “please save us” (Hoshiah na).

During the Temple service at the end of Sukkot week, the priests’ procession circled the willow‑adorned altar seven times instead of once. Each time they recited a refrain of Hoshiah na. At the conclusion of the seventh circle, they struck the willows‑the branches of trees associated with life‑giving water since they thrive near rivers and brooks‑‑ on the ground around the altar, an unexplained custom that was possibly another rain rite.

The sacrifices made throughout the week-‑a total of 70-‑were understood to represent the 70 nations that then existed in the world. Their well‑being, like Israel’s, depended on whether or not they would receive the rain needed for food supplies. Blessings like rain were understood as rewards for proper behavior (Deuteronomy 11:13‑15).

In his vision of messianic times, Zechariah presents lack of rain as punishment for the nations that fail to make pilgrimage to Jerusalem on Sukkot to worship God, which would show that they accept His sovereignty [14:16]. This prophecy, and those of Isaiah and Micah calling on all nations to show their acceptance of God’s sovereignty by going to His Temple-‑combined with the connection between Sukkot and fulfillment, the ultimate being messianic redemption‑-encouraged many proselytes to join the pilgrims in Jerusalem.

Therefore, the final day of the festival, when last sacrifices were offered on behalf of the other nations, was identified as the occasion when the earth is judged regarding replenishment of water, and consequently, when mankind’s fate, collectively and individually, is sealed. (Rabbinic literature identifies this Yom Darvata, Day of the Willow, as Yom Hachitum, Day of Sealing, an extension of Yom Kippur): Striking the willows then had the added connotation of casting away of sin or symbolizing the thrashings one would receive in punishment for sin. 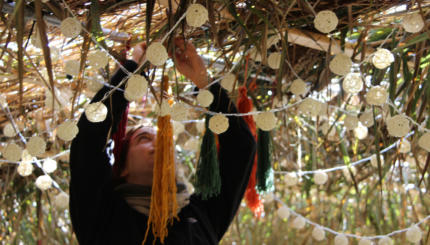