After the tragic incident of the scouts (Meraglim), as a consequence of which the generation of the Exodus is sentenced to live out the rest of its existence in the wilderness, we learn of the Mekoshesh, the one who collected wood on the Shabbat day:

And the Children of Israel were in the desert, and they found a man who collected wood on the Shabbat day. And those who found him collecting wood bought him [close] to Moshe and to Aharon and to all the congregation. And they placed him in the jail, because it was not explained what should be done to him.” (Numbers 15:32-34)

Rashi, quoting the Talmud (Sanhedrin 41a), says that the Mekoshesh was warned by witnesses, yet he ignored them and continued collecting wood. Although it was known that a Shabbat desecrator is sentenced to death, thus far the manner of execution had not been taught. Hashem instructs them to stone him, and the sentence is carried out.

Many details of this incident are shrouded in mystery. When did this occur? Rashi, based on the Sifri, says that it was during the second Shabbat in the wilderness. Ramban (Nachmanides) claims, according to the simple meaning of the text, it happened after the incident of the scouts.

Who was the Mekoshesh? Rabbi Akiva identifies him as Tzelofechad (Rashi, B’midbar 27:3). Rabbi Yehudah ben Betera insists that we are not meant to know who he is.

What was his sin? The Talmud (Shabbat 96b) quotes a three-way dispute regarding the precise melakha (category of work) that he violated: 1) plucking, which is a sub-category of harvesting; 2) heaping, a sub-category of making sheaves; 3) carrying four-cubits’ distance in a public domain.

What were his intentions? A straightforward reading suggests that his wood-collecting was an act of rebellion against Shabbat. But some midrashim (including the Targum Yonatan) insist that the Mekoshesh acted l’shem shamayim (for the sake of heaven), in noble self-sacrifice, to show the Jewish people that the Shabbat must be observed.

The unfortunate Mekoshesh is a man who is defined and identified by his sin, because that is all we know about him with certainty. Perhaps an insight into this incident can be found by comparing it with others; this is not the first time that the sanctity of the Shabbat has been disrupted by an act of collecting.

The first such violation occurred in Egypt. Shemot Rabbah (1:32) teaches that when Moshe lived in the palace, he observed that the Hebrew slaves had no opportunity for rest. Without one day of rest per week, he argued, Pharaoh’s slaves would die. Pharaoh was persuaded, and Moshe instituted Shabbat as their day of rest. But later, when Moshe the prophet of Hashem approaches Pharaoh and argues for the slaves’ release, Pharaoh retaliates by removing the slaves’ allotment of straw while maintaining the quota of bricks they must produce:

“You shall no more (lo tosifun) give the people straw to make the bricks as yesterday and the day before, they will go and collect (v’kosheshu) straw for themselves” (Exodus 5:7).

An additional midrash (Shemot Rabbah 5:22) explains that the Hebrew slaves had in their possession various scrolls, relating the incidents of the book of Bereishit, which they would enjoy reading during their rest every Shabbat. They knew from these scrolls that Hashem would redeem them. Pharaoh, therefore, decreed the collecting of straw so that they would have no rest, and thus not be able to think of redemption.

Hirsch notes that lo tosifun is spelled as if it said lo te’asfun, “do not assemble,” because the purpose of the decree was to disperse the slaves, to prevent any assembly in which such ideas as devotion to Hashem, redemption or human dignity could be discussed. Originally, Pharaoh understood that, as a day off, Shabbat would protect his investment. After all, even on their day off, slaves retain the self-image of slaves. But the Hebrew slaves had a glorious historical memory, an unshakable connection to Hashem, which they recalled on Shabbat, in repose and stability.

The spiritual rejuvenation of Shabbat is a potent, subversive power against tyrants. Pharaoh, like many dictators throughout history, feared Shabbat. He knew that the key to undermining its effect upon the human spirit was to keep the slaves moving and to prevent them from assembling, so he decreed that every slave become a “mekoshesh.”

The second incident involving Shabbat and collecting was in the Wilderness of Sin (Exodus 16), when Hashem provides the Children of Israel with manna. They must collect (L-K-T  is the verb-root used here, because Mekoshesh is appropriate only for collecting items that grow from the ground) the manna for six days, gathering a double portion on Friday. They must refrain from doing so on Shabbat, because no manna will fall then. Despite this, some of the people go out to collect manna, but they cannot find any. Hashem’s response is to chide them for their disobedience, and also to encourage them:

See that Hashem has given you the Shabbat; therefore, He gives you on Friday provision for two days. Let each man remain in his place; let no man leave his place on the seventh day.” (Exodus 16:29)

Once again, we are taught that Shabbat is incompatible with collecting, not only in order to provide physical rest, but in order to create the atmosphere of tranquility needed to engender the full expression of Shabbat’s spirituality.

What happened to the mekoshesh? Was he unable to live up to the challenge of freedom when he found himself in the wilderness? Did the decree against his generation leave him with a feeling of restlessness? Did he regress to a pattern of behavior set by Pharaoh? Or did he resort to this behavior l’shem shamayim?

We may never know. All we do know is that the spiritual treasures of Shabbat are discovered in the stability and repose it creates, and that those treasures are the keys to redemption.

Fearful of what lies ahead, the Israelites wonder if they’d be better off returning to Egypt. 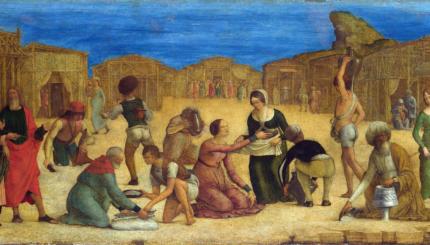