They [the Israelites] took the field against Midian, as Adonai had commanded Moses, and slew every male. Along with their other victims, they slew the kings of Midian: Evi, Rekem, Zur, Hur, and Reba, the five kings of Midian. They also put Balaam son of Beor to the sword (Numbers 31:7—8).

[Moses said to them:] “Now, therefore, slay every male among the children, and slay also every woman who has known a man carnally” (Numbers 31:17).

What do you think our behavior should be toward our enemies and those who have done us wrong?

Do you think that killing the perpetrators of idolatry will change the behavior of other idolaters?

Is it our responsibility to search for the potentially innocent individual rather than resort to collective guilt and revenge?

Does the reading of these passages affect our understanding of idolatry and the behaviors that surround it?

Are there positive lessons we can learn from this section of Matot?

Although many people still think of God as a man on a throne, idolatry in the modern age is generally considered a moral error rather than an intellectual one. If God is the only thing in the universe worthy of worship or adoration, then anyone who becomes obsessed with the desire for wealth, beauty, fame, or power is said to idolize them. From a modern perspective then, idolatry is a universal phenomenon (Kenneth R. Seeskin, No Other Gods: The Continuing Struggle Against Idolatry, Behrman House, 1995).

The Eternal God said to me: “The hour of doom has come for My people Israel. I will not pardon them again. And the singing women of the palace shall howl on that day–declares my Eternal God: So many corpses left lying everywhere! Hush!” Listen to this, you who devour the needy, annihilating the poor of the land, saying, “If only the new moon were over, so that we could sell grain; the Sabbath, so that we could offer wheat for sale, using an ephah that is too small and a shekel that is too big, tilting a dishonest scale, and selling grain refuse as grain! We will buy the poor for silver, the needy for a pair of sandals.” (Amos, 8:2-6).

The person who sins, only he shall die. Thus if a man is righteous and does what is just and right: If he has not eaten on the mountains or raised his eyes to the fetishes of the House of Israel; if he has not defiled another man’s wife or approached a menstruating woman; if he has not wronged anyone; if he has returned the debtor’s pledge to him and has taken nothing by robbery; if he has given bread to the hungry and clothed the naked; if he has not lent at advance interest or exacted accrued interest; if he has abstained from wrongdoing and executed true justice between man and man; if he has followed My laws and kept My rules and acted honestly, he is righteous. Such a man shall live, declares the Eternal God. Suppose now that he has begotten a son who is a ruffian, a shedder of blood, who does any of these things, whereas he himself did none of these things. That is [the son] has eaten on the mountains, has defiled another man’s wife, has wronged the poor and the needy, has taken by robbery, has not returned a pledge, has raised his eyes to the fetishes, has committed abomination, has lent at advance interest or exacted accrued interest: Shall he live? He shall not live! If he has committed any of these abominations, he shall die; he has forfeited his life (Ezekiel 18:4—13).

People could not hear these prophets because these prophets said what the people did not like to hear…. These prophets made people feel uncomfortable (Sheldon H. Blank, Understanding the Prophets, URJ Press, 1996).

Do you agree with Seeskin’s assessment of idolatry as being a moral rather than an intellectual error?

Amos warned the people of their doom because of their transgressions, and Ezekiel reminded them that the wicked are responsible for their own guilt and will die if they do not repent. How do you think the messages of these prophets were received?

Do contemporary prophets exist? Should they? Who delivers to you the challenging messages that you don’t want to hear regarding modifying your life? Do we need to be given severe messages like those in Amos and Ezekiel or those in Parashat Matot to force us to listen?

Based on any of the texts above, should we warn our friends and family members about their lifestyles and idolatrous materialism regardless of how difficult we find such a prophetic function to be?

In Matot the Israelites pursue revenge against the Midianites as a divinely imposed obligation. I searched for someone like Abraham who argues with God as our patriarch did on behalf of the people of Sodom in Genesis 18, but in Matot there is no such negotiation for a more peaceful resolution.

The Torah was written over a period of time. As Rabbi W. Gunther Plaut points out, this kind of historical writing was completed long after the events in the Five Books of Moses took place. Rather than deal with the accuracy of the history, let us consider some possible reasons for the wording in the Torah.

Let us focus on one reason for this utter revenge against the Midianites. The justification offered suggests that the nature of the actions of the Midianites was so gross and terrible that the punishment fit the crime. The Midianites sent their women to seduce the Hebrews sexually and to encourage idolatry. In this case, the Israelites were not taught to behave in the just or kind manner that we would consider to be in keeping with our tradition.

But perhaps we are not meant to examine the literal meaning of this story and its depiction of the Israelites. Rather, the story here is meant to warn successive generations of Jews to watch their own idolatrous behavior. It says: Beware, look what happened to the Midianites on account of their horrendous behavior. Beware, if you follow the ways of the idolaters, this can also happen to you. In other words, the passage presents a consequence for behavior. That is precisely what Seeskin is saying: God is the only entity in the universe worthy of worship, and the consequences of following idolatrous paths are disastrous.

In this case, the massacre of the Midianites was a disturbing way in which to communicate the above message and to warn the people about their behavior. The prophets also did not have an easy task when it came to warning the people about their behavior. But we need to hear the powerful messages that are being conveyed to us through the Torah, the prophets, modern authors and scientists, our doctors, our therapists, our own physical symptoms, and our families.

In order for us to improve our world, this week’s Torah portion guides us to think about several things: We must consider the consequences of our behaviors. We must think about what type of revenge in our time will help us attain a higher level. Finally, we must remain sensitive to the warnings and messages we receive each day and must make lifestyle modifications accordingly. After all, we are here to improve our world. Matot seems to be saying: Wake up and pay attention to your own behavior; don’t just think about the behavior of the Midianites. But some messages are hard to deliver. After all, idolatry is a universal modern phenomenon. 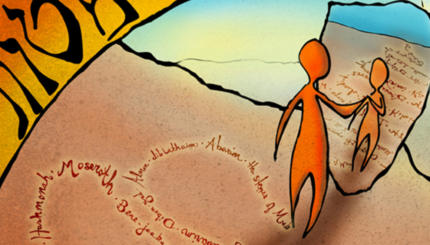 The Spiritual Trauma of Taking a Life

How the kosher practice of waiting between meat and dairy reminds us of Moses' discomfort with violence.