Scholar, theologian, leading thinker of Conservative Judaism, Schechter (1847-1915) was born in Frascani, Romania. His father, a Habad Hasid, was a shohet [ritual slaughterer], hence the family name, Schechter. Schechter received a thorough grounding in traditional Jewish learning, but in his early twenties went to Vienna to study at the Rabbinical College, where his main tutor was Meir Friedmann, a renowned Talmudist in the modern idiom.

Later Schechter took courses at the University of Berlin and the Berlin Hochschule, where a fellow student was Claude Montefiore. Montefiore brought Schechter to England to be his private tutor. In England, Schechter cultivated an exquisite English style of writing (by reading numerous English novels, it is reported) which has made his Studies in Judaism and Aspects of Rabbinic Theology classics of English literature as well as of modern Jewish thought, though, to his dying day, he spoke English with a strong foreign accent. [It is well documented that Mathilde Roth Schechter, Solomon’s wife, edited everything her husband wrote, and she is widely credited for his exquisite style. Ed.] In 1892 Schechter was appointed reader in Rabbinics at Cambridge University and in 1899 also Professor of Hebrew at University College, London.

Schechter’s reputation in the scholarly world rests securely on his critical edition of Avot, According to Rabbi Nathan (1887) and his discovery of the Cairo genizah, of which he was instrumental in bringing to Cambridge over 100,000 fragments, including the original Hebrew version of Ben Sira.

[The Cairo genizah is the most famous genizah, or storage place for sacred Hebrew texts that can no longer be used. This invaluable cache of ancient Jewish manuscripts was discovered by Schechter in the attic of the Ben Ezra synagogue in Cairo in the late nineteenth century. Ben Sira is the name of both an ancient author and the book that he authored, part of the Apocrypha. Ed.]

Schechter was appointed president of the Jewish Theological Seminary in New York, a position he occupied to his death. There Schechter, together with a number of distinguished Jewish scholars, was responsible for training a new type of Conservative rabbi and for the establishment, together with sympathetic laymen, of the Conservative body of congregations, the United Synagogue of America.

Schechter’s philosophy of Judaism is based on the ideas of Zechariah Frankel. Both Reform and Orthodoxy fail, in this view, to understand “positive historical” Judaism. Reform, according to Schechter, fails to appreciate the positive elements in traditional Judaism, while Orthodoxy fails to grasp the dynamic aspects of the tradition itself. Schechter thus sought to encourage a marriage between the old learning and the critical methodology adopted in the Judische Wissenschaft (Science of Judaism) school.

Schechter also stressed what he called “Catholic Israel.” This means that the ultimate source of authority in Judaism is the Jewish people as a whole, in which a consensus emerges as to which aspects of the tradition are permanently binding and which are time conditioned.

Where is Catholic Israel to be located? Schechter’s somewhat unhelpful response is that all three movements, Reform, Orthodox and Conservative Judaism, have their role to play. Based on his experience of the British parliamentary system, Schechter once described Orthodoxy as “His Majesty’s Government” and Reform as “His Majesty’s Opposition,” both part of the same historical body and each with its own insights, the one in the direction of loyalty to the past, the other in the need for progress.

The great question that can be put to Schechter’s understanding, and to that of Conservative Judaism, is how contradictory ideas about the very nature of Judaism can be reconciled. This problem still awaits its solution. It is revealing that, in his famous essay on the dogmas of Judaism, Schechter refuses to consider which of the dogmas can be accepted by the modern Jew. It should be added that Schechter’s theological writings have won the admiration of Christian scholars, contributing to a far better appreciation than ever before in the non-Jewish world of the riches of traditional Judaism.

The architect of American Reform Judaism 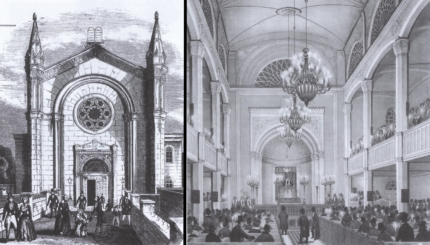