On today’s daf, the rabbis discuss the requirement of wearing tzitzit — the ritual fringes on the corners of one’s garment. Today, many Jews wear them as a tallit katan (“little tallit”) under one’s clothes.

The Torah contains a few sparse statements about the fringes that are fairly non-specific. The rabbis examine these verses to develop a more fine-grained understanding of the obligation and today we’ll dive into the nitty-gritty of that discussion. We’ll begin with a tannaitic (early rabbinic) debate quoted on today’s page:

With regard to ritual fringes it is stated: “And it shall be unto you for a fringe, that you may look upon it and remember all the mitzvot of the Lord” (Numbers 15:39). The phrase: “That you may look,” comes to exclude a night garment, which cannot be seen and is therefore exempt from the mitzvah of ritual fringes.

Do you say that the verse comes to exclude a night garment? Or is it only to exclude the garment of a blind person who is also unable to fulfill the verse: “That you may look upon it”?

When it says in Deuteronomy 22:12: “Of your covering, with which you cover yourself,” the garment of a blind person is mentioned, as he too covers himself with a covering. If so, then how do I fulfill the exclusion: “That you may look upon it”? It comes to exclude a night garment.

In Numbers, we find the requirement that one should make a fringe for one’s garment in order to “look upon it and remember all the mitzvot of the Lord.” Two things are happening here. The rabbis understand this clause as a qualification, indicating that fringes that cannot be seen — literally — do not serve their intended purpose of being reminders of God’s commandments.

If the purpose of the fringes is to be seen, the first rabbi in this teaching concludes, then clearly it is not necessary to place tzitzit on your pajamas, since they are worn in the dark.

This perspective is immediately challenged. Maybe the phrase intends to exclude people who are blind and will not see their tzitzit even in the daytime?

So which is it? Pajamas or the blind? The rabbis resolve this debate by turning to a second verse about tzitzit, this one from Deuteronomy: “You shall make for you twisted fringes upon the four corners of your covering, with which you cover yourself” (Deuteronomy 22:12).

The rabbis understand this verse to mean that tzitzit are to be placed specifically on garments that cover the body. Since a blind person covers themselves with a garment, they too must be obligated in tzitzit even though they cannot see them. The position that the verse from Numbers about seeing the tzitzit refers to pajamas — and not people who are blind — wins the day.

If you’re left wondering why garments worn by the blind should have tzitzit and pajamas (which also cover the body) do not need them, you’re not alone. Later rabbis quoted in the Gemara clarify this teaching:

Since there is one verse that includes and another verse that excludes, what did you see that led you to include a blind person and to exclude a night garment in the obligation of ritual fringes? I include the garment of a blind person because it is, at least, visible to others, and I exclude a night garment because it is not even visible to others.

First, the Gemara elucidates the logic of the tannaitic discussion. The verse from Numbers about “seeing” the tzitzit was interpreted as an exclusion — it excluded tzitzit  that are not seen, either because they are worn at night or worn by someone who is blind. The verse from Deuteronomy, about placing tzitzit on a garment that covers one’s body, was understood inclusively — it added the garments of the blind back into the obligation.

The answer: Because a blind person’s tzitzit are seen by others, but a person’s pajamas — worn in the dark — are not. In the end, it’s not just about whether we see our own tzitzit, but whether other people see them as well.

Read all of Shabbat 27 on Sefaria.

This piece originally appeared in a My Jewish Learning Daf Yomi email newsletter sent on April 2, 2020. If you are interested in receiving the newsletter, sign up here. 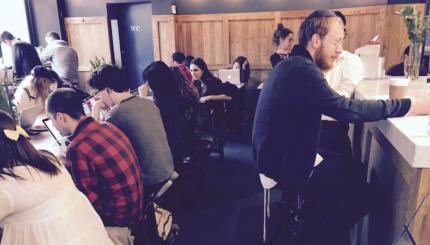 The tzitzit (fringes) and tallit (prayer shawl) serve as physical reminders of our connections with previous generations and of the faith that sustained them and us.