We know writing is prohibited on Shabbat, but the mishnah that kicks off today’s discussion takes that prohibition one step further:

One may count guests who are coming to one’s meal and one’s appetizers, as long as one does so from memory; but one may not read them from a written list.

Rav Beivai said: It is a decree lest one erase something that is written on the list if he regrets inviting a particular guest or changes his mind about a particular dish.

Abaye said: It is a decree lest one read regular business documents.

Erasing, like writing, is forbidden. Rav Beivai is concerned that a person making last-minute changes will physically amend the written list. Abaye’s concern is that reading the menu might lead to accidentally reading business documents, which might look similar at a glance. The Gemara takes both concerns seriously, and suggests work-arounds — ways to maintain a written guest list while making it unlikely the host will engage in either violation. For instance, it is suggested that one may inscribe the menu and the names of guests high up on the wall, where they can neither be erased nor confused with business documents. (From personal experience, I can attest that without having a list of what I’m serving visible somewhere, I am likely to leave key elements of the meal in the refrigerator! Ask anyone who has ever eaten turkey at my house if I forget the cranberry sauce. The answer is: Every. Single. Time.)

But perhaps Rav Beivai, who is concerned about erasure, has something more than a violation of a Shabbat melachah in mind. I think his real concern is that a host will regret inviting a particular guest, and decide to uninvite them — to erase them from the list. While we might think this could result merely in social awkwardness and hurt feelings, Jewish tradition elsewhere teaches us that the results of such a slight can be much, much graver.

Beginning on Gittin 55b (a page Daf Yomi readers will come to in three years’ time!) the Talmud relates perhaps the most famous story about the destruction of the Second Temple, the story of Kamtza and Bar Kamtza. The story tells of a wealthy man who lives in the 1st century CE. For an upcoming party he sends his servant to deliver an invitation to his friend, a man named Kamtza. However, the servant mistakenly delivers the invitation to Bar Kamtza, an enemy of the wealthy man. Upon seeing the hated Bar Kamtza at his party, the host orders him to leave. Bar Kamtza attempts to save face, offering first to pay for the food he eats, then for half the cost of the party and finally for the entire cost of the party, but each time he is rebuffed by the angry host. Finally, the host forcibly and humiliatingly removes Bar Kamtza. Vowing revenge, Bar Kamtza pays a visit to the Roman Caesar who controls the region and makes a false report that the Jews are inciting a revolt. In short order, Caesar besieges the Jewish capital, destroying both it and the Temple, ending both the primary form of Jewish worship in that time and Jewish sovereignty in the land of Israel for 2,000 years (not to mention countless lives).

Kindness to guests matters — so much so that in Bava Metzia 58b, the rabbis equate humiliating someone with murder. Perhaps both with this famous story of Kamtza and Bar Kamtza and in today’s daf, the sages are reminding us that rescinding an invitation is a grave error. Indeed, today’s Gemara suggests guarding against that possibility by literally engraving your guest list on the wall.

So, the next time you write out your menu and guest list, make sure it’s the final version. The world might depend on it.

Read all of Shabbat 149 on Sefaria.

This piece originally appeared in a My Jewish Learning Daf Yomi email newsletter sent on August 2, 2020. If you are interested in receiving the newsletter, sign up here. 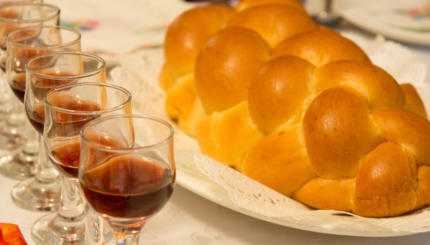