In today’s world, families are formed through blood and marriage and, as author and activist S. Bear Bergman teaches, “wine and glitter” — an allusion to how queer communities have come together to form families, supporting and celebrating each other in ways that others cannot. This idea is also found embedded deep within Jewish tradition. In the Book of Ruth, families of origin are replaced by chosen family, reimagining the way families are created.

In the Book of Ruth, Naomi and Ruth’s familial connection begins traditionally enough: Ruth marries one of Naomi’s sons and becomes her daughter-in-law. Yet, there is still something surprising here. Ruth is a Moabite, a daughter of the land in which Elimelech has brought his family, and part of a people who are biblical enemies of Israel.

With the death first of Elimelech, Naomi’s husband, and soon after their sons Machlon and Chilion (all in the first few lines of the book), Naomi is rapidly left in a strange land with no family save for her new Moabite daughters-in-law, Ruth and Orpah.

This situation tests a new and fragile family bond. The three women must choose whether or not they still wish to remain a family. The mens’ deaths force them into difficult and sweeping choices — first for Naomi, who must decide whether or not to stay in Moab or return to her hometown in Bethlehem; and then for Ruth and Orpah, whether to go with Naomi or turn back.

At first, Naomi urges her daughters-in-law to return home, because this will offer them a second chance at traditional family making among their own people: “May the Lord grant that each of you find security in the house of a husband!” she says at first (Ruth 1:9). Then, after their initial protests: “Have I any more sons in my body, who might be husbands for you?” (Ruth 1:11) Her assumption is that they wish to build traditional family units on the same blueprints as the ones they have recently tragically lost. And, indeed, Orpah chooses to return home, presumably to find a new husband.

But Ruth offers an alternative vision in her pledge to accompany Naomi, one that embraces her new and unexpected family situation. Declaring that she’ll follow Naomi back to the latter’s homeland, she utters the now famous declaration:

Where you go I will go, and where you stay I will stay. Your people will be my people and your God my God.

These words have been used in Jewish wedding ceremonies for decades, to mark the formation of new families, created by adults of all genders. Ruth reminds us and herself that with Naomi she can meet the deeper needs that are met by family: companionship (“where you go, I will go”), shelter (“wherever you lodge, I will lodge”) and wider connection (“your people will be my people”). These, according to the Book of Ruth, are the true building blocks of family. While the text records no response from Naomi to Ruth’s remarkable declaration — leaving space for a multiplicity of interpretations as to her initial reaction — it seems clear that Ruth has made a compelling argument. The two continue to Bethlehem, leaving behind Ruth’s homeland and heading to Naomi’s.

Once they reach Bethlehem, Ruth and Naomi must find a way to meet their basic survival needs in the absence of husbands. Ruth goes to glean in the fields, picking up the produce that is missed by harvesters and was, in ancient Israel, intentionally left to feed the poor. She finds particular success and comfort gleaning in the fields of a wealthy man named Boaz.

It isn’t until Boaz enters the picture that the text provides us with a hint that Naomi considers herself and Ruth to be a family unit. Returning to their home after a day of gleaning, Naomi asks Ruth where she gleaned. Upon learning that Ruth was in Boaz’s fields, Naomi reveals that he is “related to us; he is one of our redeeming kinsmen.” (Ruth 2:20) The role of Boaz as redeemer becomes a central question in what unfolds — the devising of a plan for Ruth to seduce Boaz in order to seek his protection. Some nights later, upon waking to Ruth at his feet (she snuck onto the threshing floor), Boaz inquires as to her identity, to which Ruth replies “I am your handmaid Ruth. Spread your robe over your handmaid, for you are a redeeming kinsman.” (Ruth 3:9)

It is Ruth who once again makes active choices to construct her family. As the JPS Commentary to the Book of Ruth explains: “[A]t this point Ruth no longer follows Naomi’s directives; she has been instructed to have Boaz tell her what to do. Instead, she takes charge and tells him what he should do.” (59) Ruth evokes the law of levirate marriage (another way ancients formed unconventional families) which states that the brother of a man who dies without children should marry his widowed sister-in-law and raise up children for his dead brother. But Boaz wasn’t really Ruth’s deceased husband’s brother — he was a more distant relation. And it isn’t at all clear that Boaz has any responsibility toward Naomi or Ruth beyond buying back family land. Nonetheless, Boaz does what Ruth asks and takes steps to marry Ruth in addition to buying back the land

Aviva Zornberg understands Boaz’s decision to marry Ruth as an act of chesed, loving-kindness. In so doing, he gives her societal status, financial means and a chance to produce children on behalf of her deceased husband. In my view, Boaz is not merely acting out of obligation, but from an intentional extension of love and care toward Ruth and Naomi. Boaz is choosing to build a family with them.

The birth of Ruth and Boaz’s son Oved is the final component in the creation of this new family. When Ruth gives birth to Oved, the community of women serve as witnesses to several pieces of this occasion: that Oved will sustain Naomi in old age (Ruth 4:15), that Ruth loves Naomi and finally that Naomi will be a surrogate mother to Oved. The JPS Commentary on 4:15 names Ruth’s love for Naomi as a “covenant term.” (90) The women of the neighborhood not only recognize the emerging family structure, but also model a possibility of an extended family paradigm, providing love and support for this new family.

By the end of the book of Ruth, we have a constellation of people committed to caring and providing for each other. Boaz provides the stability necessary to make sure basic needs are met, Ruth and Naomi — Moabite and Israelite mother and daughter-in-law — provide companionship for each other, and the birth of Oved offers the potential of a new beginning. And Oved also has a much greater cosmic significance: It is from his line that King David and ultimately the Messiah will be descended.

The Book of Ruth reminds us that way back then, as now, not all families looked like the 1950’s American ideal of a mom, dad, two kids and a picket fence (dog optional). In antiquity, as today, chosen family — in all its many constellations — was real, powerful and lasting. As Ruth eloquently reminds us in her immortal speech to Naomi, family is about basic needs, companionship and larger networks of connection, all of which can be found in places we don’t necessarily expect.

The queer and trans community in particular has long relied on chosen family as an alternative to traditional family structures when biological relatives cannot offer the companionship and tangible support that someone needs. To quote S. Bear Bergman again: “We establish for ourselves cells of belonging, where we can feel fully known and accepted and also mentored and able to mentor others.” (23) Bergman calls these glitter family: “the people who those of us pushed to society’s margins (and beyond) make our cohort.” (28) Naomi, Ruth, and Boaz create exactly this kind of glitter family for each other: a source of support that normative family structures can no longer provide. 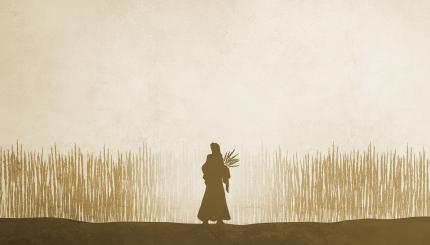 Why Ruth on Shavuot?

The tale of this young Moabite widow teaches a lesson in ethical behavior.