Theologian Elizabeth Dodson Gray notes: “Women’s bodies may be the hardest place for women to find sacredness” (Sacred Dimensions of Women’s Experience, 1988, p. 197). Our society sends negative messages to women from earliest childhood about the expected perfection of their physiques and the disappointments of any flaws in the female form. Parashat Metzora, then, with its focus on menstrual impurity (Leviticus 15:19-24), seems to impart the same kind of unfavorable sense. Rejecting our own received biases and patriarchal assumptions about menstruation, however, can help us form a contemporary view of these so-called taboos.

What the Torah deems as tamei (“impure”) or tahor (“pure”) is not actually attached to cleanliness, even though they are often translated as “unclean” and “clean.” These Hebrew words are ritual terms, meant to designate those in a physical and spiritual state unable to enter the Mishkan (Tabernacle; and in later times, the Temple), or those able to do so. Those who are considered tamei are taboo (which is not what we think of as “bad”), meaning that they cannot enter the sacred space; and the thing that causes them to be ineligible to enter is also understood to be taboo.

Menstruation symbolizes the advent of a new power that is mana. . . ‘sacred.’ … A taboo expresses this feeling that something special, some holy power, is involved, and our response to it must be very careful. (in WomanSpiritRising, 1989, p. 251)

This mixed message of fear and power, contact and avoidance, actually dominates all the Torah’s passages around blood.

Blood, which is to be avoided in the realm of eating and sex, is the same substance that atones for the community in the sacrificial system, and it binds the individual male child to the Israelite covenant through circumcision. Blood both sustains and endangers; it is the medium of plague or deliverance. Thus blood — like every potent symbol — has the double quality and the twin potential of birth and decay, purity and impurity.

So too with menstrual blood. We who are often uninspired and unaffected by our bodies should reject the negative connotation of taboo — and explore, instead, the positive and sacred aspect. Surely a religion that has a blessing for an activity as mundane as going to the bathroom should have a blessing for the coming and going of menstruation. Since the male composers of the liturgy, living in a world where modesty was central and women’s bodies were a mystery at best, were not able — or more likely, not willing — to imagine such a blessing, we must be the first generation to do so.

I believe it is possible to rescue the aspects of mystery inherent in menstruation. While we reject menstrual huts, a separation from the sancta, and antiquated notions of cleanliness, we can still emerge with a sense of the overwhelming mystery of life and death that is embodied in our corporeal female selves. While many women associate menstruation with physical pain and discomfort, the experience nonetheless involves a degree of power. We should reject the notion that menstruation makes a woman “unclean” and instead think of this time as a period of intense electrical charges-the charge of life and death-pulsing through our bodies. Blu Greenberg urges us to focus more on the positive, “to restore that element of holiness to our bodies, our selves” (On Women and Judaism, 1981, pp. 118-120).

We can also consider a connection between menstruation and covenant. The prophet Zechariah speaks to “daughter Jerusalem” and “daughter Zion” about “your covenant of blood” as that which releases prisoners from the dry pit (9:9-11). It does not say “the covenant of blood,” as most translations render it, but rather emphasizes that blood is the focus of the covenant. The address to the feminine persona suggests that all “daughters of Zion” have that covenant of blood. It is through menstruation–from puberty when we accept our responsibilities as Jews, through the elder years when bleeding stops and deep wisdom starts–that the entire world is saved from the dry pit of death, in which there is no water, no womb, no regeneration, no rebirth.

See menstrual blood, then, as women’s covenantal blood–just as the blood of b’rit milah (ritual circumcision) is men’s. The possibilities for rituals around this abound. For women too have a b’rit (covenant) inscribed in our flesh as an “everlasting covenant” (Genesis 17:19): not just once, at eight days old, but every single month. And Metzora, in its ancient and perhaps awkward way, attempts to remind us. 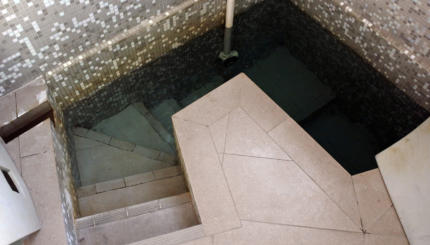 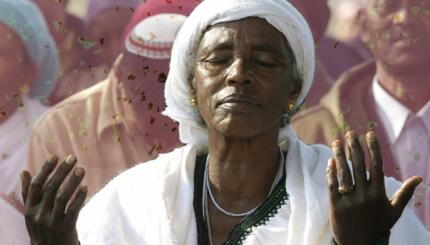 Beta Israel women in Ethiopian villages were inactive in public and were in charge of the domestic sphere.

Reconciling Biblical Morality with Our Own

Assumptions in Leviticus 18 are in some cases abhorrent to contemporary sensibilities.