Aside from a small circle of students and admirers, Rabbi Yehuda Ashlag was an unknown figure at his death in 1954. Today, religious schools and New Age “educational centers” around the world are actively spreading his ideas, and his writings are being analyzed by professors and graduate students. After spending an hour in the rabbi’s stone mausoleum, the pop-diva Madonna emerged with tears in her eyes. Who was this person to whom scores of pious (and impious) Jews and non-Jews are turning for inspiration?

Born in Poland in 1885 to an Orthodox family, Yehuda Ashlag quickly established himself as a Talmud scholar and rabbinical jurist. His deepest commitment, however, was to kabbalah, the Jewish mystical tradition, which he interpreted in light of the revolutionary fervor that characterized his times. After moving to the land of Israel in 1921, he quickly began to disseminate his radical claims.

A New Interpretation of Kabbalah

Far from being an otherworldly tradition, kabbalah according to Rabbi Ashlag is a logical system intended for the ethical and political redemption of human society. And far from being an esoteric discipline, study of which must be reserved for an intellectual and spiritual elite, kabbalah should be taught to everybody.

Although his books display impressive erudition, the heart of Ashlag’s teaching is quite simple: God is the absolute good, Who gives and never takes. By observing His commandments, we can overcome our own desire to receive, cultivate our capacity to give, and thus become godly ourselves. A society ruled by the desire to receive rather than to give—in other words, a society that celebrates the acquisitive impulse—distances itself from God and has a deeply corrupting influence. In this light, it is easy to understand why Ashlag championed a Torah-based form of communism.

After his death, the rabbis’s two sons and brother-in-law set out to propagate his ideas by publishing books and founding schools. They, too, died marginal figures, but they raised a generation of students and disciples who have rescued their teacher’s work from the margins. Among institutions spreading versions of his teachings, one in particular, the U.S.-based Kabbalah Center, has proved especially effective, not least in reaching the likes of Madonna.

The Kabbalah Center was founded in 1965 by Philip Berg, who as a young man studied with Ashlag’s brother-in-law and who has claimed to be the master’s direct successor. And not his alone: a timeline at the organization’s website links Berg and his wife to no lesser a figure than the biblical patriarch Abraham.

A quick glance at Center offerings may be enough to suggest that Berg is working some of his own magic. For one thing, there’s the red string that can be purchased to protect an individual against the “evil eye.” The price is $20, for a commodity that may actually be worth ten cents—an example, perhaps, of how the Kabbalah Center helps its members become godly givers. Then there’s an online lecture in which Jesus is referred to as an adept of kabbalah, which would certainly come as news to kabbalists. This and Berg’s recent references to the Zohar as “the Holy Grail” raise the question of where exactly he and his organization may be headed.

Marketing aside, what is the connection between kabbalah in general, and Ashlag’s teachings in particular, and what the Kabbalah Center preaches? Consider the matter of the soul, a fundamental element in kabbalistic thought. The soul, in all of its gradations, is given by God; it belongs to an order that it did not create, and it exists to be cultivated. By contrast, Madonna, a/k/a “Esther,” is hardly alone these days in confusing the soul with the self—which is not part of any order, which bows to nothing but itself, and which invents and re-invents itself repeatedly.

Traditionally, kabbalah was considered a secret science, something only for the few. Rabbi Ashlag challenged this convention. If there is anything to be learned from the contemporary fate of his teachings, it is the deep wisdom of the traditional view. As the rabbinic sages said in praise of the biblical Esther, “A blessing rests only on something that is hidden from the eye.” 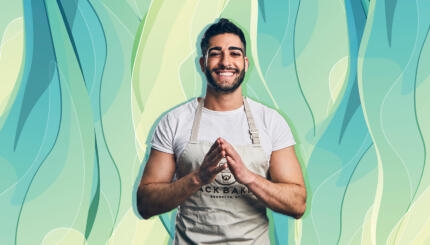 Challah Guru Jack Hazan Wants You to Bake Your Feelings

This Syrian Jewish therapist is our new favorite baker. And Madonna's too.

In the last three decades, Jewish mysticism has gone from an underground discipline to a mass phenomenon.