The Religious Status of Yom Ha’atzmaut

A prayer for the welfare of the national government and its leaders has been part of the Jewish liturgy from ancient days. This tradition can be traced in practice to the daily sacrifices made in honor of Caesar at the end of the Second Temple period over 2,000 years ago.

The importance of praying for the welfare of the ruling body was established by the prophet Jeremiah after the first exile from Jerusalem, in 586 B.C.E. He tells the exiled Jews, “Seek the welfare of the city where I have caused you to be exiled, and pray to God on its behalf, for in its prosperity you shall prosper” (Jeremiah 29:7).

By instructing the Jews to pray for Babylonia, Jeremiah is teaching them to recognize that in exile they were physically, economically, and politically dependent upon Babylonia and the good will of its rulers. The situation of powerlessness and dependence demanded that God be implored to direct the leaders of the country to rule the Jewish population in a just and merciful way.

The first siddur [prayerbook] including a prayer for the government is from the 14th century, and the practice is described there as an “established custom.” Hundreds of different prayers for various governments under which Jews have lived (and live) exist today, and are valuable windows to these Jewish communities.

This background is important to understand the thinking of the authors of the Prayer for the Welfare of the State of Israel.

On the Fifth of Iyar–May 15–1948, the Jewish people became sovereign rulers in the Land of Israel. This new situation posed many challenges to the Jewish people, a people that had lived most of its history under the direct control of others. Confronting and understanding the meaning of sovereignty and independence created a high level of political, cultural, and religious creativity during the early years of the state.

For the first time since antiquity, Jewish religious leaders had the opportunity to compose a prayer for the Jewish leaders of a Jewish state. Should the prayer express the ideology, hopes, and aspirations of the Zionist movement? Or, should it be a prayer for the leaders of Israel (treating them like any other political leaders of any country), without taking into account the profound meaning of Israel to many Jews?

Here is the translation of the prayer:

“Our Father Who art in Heaven, Protector and Redeemer of Israel, bless Thou the State of Israel which marks the dawn of our deliverance. Shield it beneath the wings of Thy love. Spread over it Thy canopy of peace; send Thy light and Thy truth to its leaders, officers, and counselors, and direct them with Thy good counsel.

“O God, strengthen the defenders of our Holy Land; grant them salvation and crown them with victory. Establish peace in the land, and everlasting joy for its inhabitants.

“Remember our brethren, the whole house of Israel, in all the lands of their dispersion. Speedily let them walk upright to Zion, the city, to Jerusalem Thy dwelling-place, as it is written in the Torah of Thy servant Moses: ‘Even if you are dispersed in the uttermost parts of the world, from there the Lord your God will gather and fetch you. The Lord your God will bring you into the land which your fathers possessed, and you shall possess it.’

“Unite our heart to love and revere Thy Name, and to observe all the precepts of Thy Torah. Shine forth in Thy glorious majesty over all the inhabitants of Thy world. Let everything that breathes proclaim: The Lord God of Israel is King; His majesty rules over all.” Amen.

This is much more than a prayer for the government. It is a proclamation of belief that:

1)      the establishment of the State of Israel is a divine event and that this event is the fulfillment of God’s promise to the Jewish people and part of the divine plan to redeem the world;

2)      the maintaining of the state and its defense is a matter for God’s intervention;

3)      God will bring all Jews to live in Israel from the Diaspora.

The ideology that is the basis of the prayer is expressed best by Rabbi Yehudah Amital, a former government minister and leading religious leader in Israel. He writes that Zionism is “…the Lord’s vehicle for preparing Israel for its redemption. The habitation of the Land of Israel by a group of its children, transforming wastelands into gardens, and the establishment of independence within its borders, are stages in the process of redemption…and even though they are accompanied by suffering and tribulation, the strides are certain and the course is clear…”

The authorship of the prayer is unclear. Some say it was written by Chief Rabbis Yitzhak Herzog and Ben Zion Uziel with the assistance of other rabbis. Others suggest that the prayer was revised by the rabbis after suggestions made by Nobel Laureate Shmuel Yosef Agnon, one of the pioneers of modern Hebrew literature. Still others are convinced that Agnon wrote the prayer himself and that it was later adopted by the Chief Rabbinate.

A prayer for the State of Israel is recited in synagogues of most religious streams in Israel and the Diaspora (outside of the ultra-Orthodox communities). In Israel, most use the text of the Chief Rabbinate, although there are congregations that use their own versions and variations. In the Diaspora, there is even less conformity, and while many communities use the text of the Chief Rabbinate, many utilize other prayers.

There are many reasons why all congregations haven’t adopted the Chief Rabbinates prayer.

Most of the arguments surrounding the prayer concern the Messianic role of the state. The first line of the prayer pleads, “Bless Thou the State of Israel which marks the dawn of our deliverance.“The belief that the Jewish state is the first step in redemption is seen by Rabbi Amital as “certain” and “clear,” but the fact is that not everyone is certain and clear on this point.

For most haredim (ultra-Orthodox), no matter where they live, redemption will not be brought by the establishment of a secular state, but by the observance of Torah. Although the vast majority in this community are deeply connected to the state and are proud of it in many ways, they do not see the state in Messianic terms.

Others hold that Messianic beliefs in God’s impending intervention in history are fine for the realm of the spirit, but have no place in the affairs of a sovereign state. They point to many examples in Jewish history when Messianic ideas caught the imagination of the people and led to disaster, such as the war against the Romans that ended in the destruction of Jerusalem.

There are other problematic passages in the prayer. Jews in the Diaspora, who are quite comfortable in their homes, may not relate to a prayer that pleads with God to speedily return them to Israel. Such an idea may be acceptable in a spiritual, theoretical sense, but when tied to a prayer for the sovereign Jewish state, it may be difficult to accept.

Others find the triumphant nature of the prayer problematic. In my own congregation in Israel, there is a constant debate over the words that ask God to grant the defenders of the land with “victory.” Why do we need to ask for military victory in addition to peace, as if war is an inevitable, permanent part of living in Israel?

These tensions have led many religious leaders to re-write the prayer in a way that expresses love and devotion to the State of Israel, without the Messianic overtones and with less of the triumphant spirit of the original.

The celebration of Israeli independence is marked each year on the fifth day of the Hebrew month of Iyar. 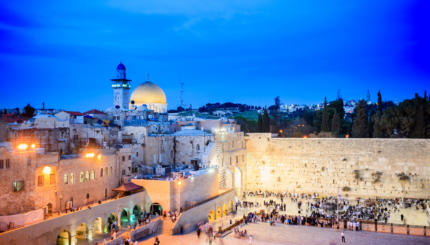 The importance of Israel for Jews who do not live there.