Parashat Chukat begins and ends with the deaths of Miriam and Aaron.

Verse 1: The entire community of the children of Israel came into the wilderness of Tzin in the first month, where the people settled down in Kadesh and Miriam died and was buried.

Verse 28: Moses divested Aaron of his (priestly) garments and invested his son Eleazar with them. Aaron died there on the top of the mountain and Moses and Eleazar descended from the mountain.

Following the death of Aaron in verse 29, the Torah tells us that “the entire community saw that Aaron was dead and the entire house of Israel wept for Aaron 30 days.” Interestingly, there is no mention of any mourning following the death of Miriam. In fact, what follows immediately upon her death is the typical grumbling of the Israelites. The water that had been provided over 40 years to the Israelites was due to Miriam. When she died, the water immediately dried up and the people’s thirst led them once again to rebel against Moses.

1: What was it about Miriam that ensured the miracle of water in the wilderness for the people?

3: Why do you think the people complained, instead of mourning, after the death of Miriam?

4: Who fulfilled Miriam’s responsibilities after her death?

“In that generation the women built up the fences, which the men broke down.”

The passage from Numbers Rabbah is too long to quote, but shows that the women did not participate in the building of the Golden Calf or accept the Council of the Spies not to enter Eretz Yisrael (land of Israel). The following is the conclusion of the passage.

“Against this congregation the decree (not to enter the Land) was issued, because they had said: ‘We are not able to go up.’ The women, however, were not with them in their counsel.”

Rabbi Samson Raphael Hirsch commented on this by saying:

As a result, the women, as grandmothers and mothers, were able to go with the new generation when it entered the Promised Land for its new future, and to bring with them into that new future their personal recollections of their past in Egypt and of the momentous events they had witnessed in the wilderness under the protection and guidance of God.

Thus they were given the opportunity to inspire their grandchildren and great-grandchildren with the spirit of the God-revealing experience they themselves had witnessed. The fact that these Jewish women were so deeply and thoroughly imbued with the Jewish spirit may be ascribed in no small part to Miriam, who set them a shining example as a prophetess.

The greatness of Miriam was that she was the embodiment of the honor and glory of the women of Israel. Moses, Aaron and Miriam were not misled by falsehoods and lies or controlled by a desire for instant gratification. Rather, they held fast to the way of life that makes us who we are. Our ancestors knew that they had not lost Miriam, but that her essence is contained within every Jewish woman.


Reprinted with permission from Hillel: The Foundation for Jewish Campus Life. 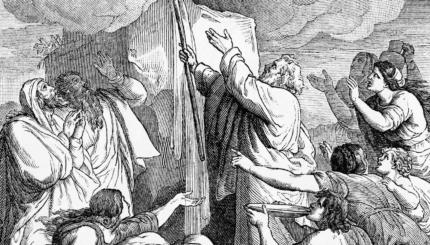