Whatever kind of relationship we’re in, many of us tend to naturally gravitate towards defined roles. In a marriage, for example, one partner might love cooking, the other cleaning. One might do home repairs, while the other is the social organizer. As a result, when we lose a loved one, we may be thrust into new roles for which we’ve been mere understudies. Fortunately, Parashat Shemot provides hope for survivors of loss to grow into a new role.

Almost every character in this Torah portion adapts to a new role. The courageous Egyptian midwives, who refuse to drown Jewish male babies in the Nile, change from obedient subjects to civil dissidents. Pharaoh’s daughter went from being a member of a murderous Egyptian monarchy to the rescuer of an Israelite baby. And Moses starts out as an Egyptian prince, then becomes a solitary shepherd, and finally winds up a very public leader. It’s unlikely that any of these individuals anticipated how swiftly they would need to take on unfamiliar roles — especially Moses, who was 80 years old when God appointed him as leader. Where did they find the courage to change their personae so suddenly?

After Moses reluctantly accepts his new role as leader of the Israelites, he asks God a straightforward question: What shall I tell the Israelites when they ask God’s name? God responds: “Ehyeh Asher Ehyeh (I will be what I will be). Thus shall you say to the Israelites: ‘Ehyeh (Being) sent me to you.’” (Exodus 3:14).

God teaches Moses that names fix our identity, but such defined role expectations cannot confine God, whose presence in the world changes by the situation. And we, who are created in God’s image, have the power to do likewise. Just as God can be what God will be according to a particular need, our inner divine image enables us to be what we need to be in light of our loss. Our inner divine spark can kindle our courage to assume new roles, and our family, community, and friends can fan it into a guiding light. Like the characters in Parashat Shemot, we can draw on our ability to fill the vacant roles left by our loss and grow into new ones.

This article initially appeared in My Jewish Learning’s Reading Torah Through Grief newsletter on Jan. 13, 2023. To sign up to receive this newsletter each week in your inbox, click here. 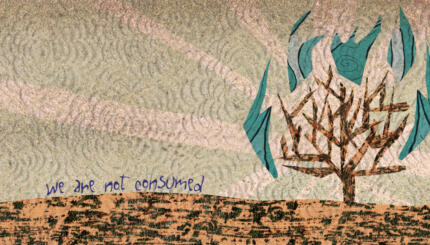 Jacob’s courage shows that by facing our fears, we can overcome them and move forward.