On July 3, 1976, the Israeli Defense Force swept into the airport in Entebbe, Uganda and freed the hostages of Air France Flight 139. Operation Entebbe, also known as Operation Jonathan and Operation Thunderbolt, saved nearly all the passengers on the flight as well as its crew. It has become the most famous rescue mission in Israeli history.

The hijackers of Flight 139 were members of the Popular Front for the Liberation of Palestine (PFLP).

The PFLP was founded in the 1960s by George Habash, a Christian Palestinian, with the aim of liberating Palestine, and from “reactionary imperialism.” The first PFLP hijacking was on July 18, 1968, taking a Rome-bound El Al plane to Algeria, where the passengers were held hostage for a month until Israel negotiated their release. By the late 1970s,  the PFLP had splintered off into different factions, and the destruction of Israel was the organization’s only explicit goal.

How to Steal an Airplane

In June 27, 1976, the new PFLP leader, Waddia Haddad, coordinated another aircraft hijacking, this time on an Air France flight from Tel Aviv to Paris. Four terrorists–two Palestinian and two German–were on the flight. The terrorists took over the plane shortly after a brief layover in Athens. They diverted the aircraft, which had 254 passengers, to Benghazi, Libya for refueling, and then flew to Entebbe, Uganda, where more terrorists were waiting to aid them.

Israeli Prime Minister Yitzhak Rabin and Defense Minister Shimon Peres took the lead in handling the hostage situation. Their plan was to appear to negotiate with Amin and the PFLP in order to buy time to coordinate a covert rescue mission.

Israel caught two unexpected breaks in preparing for its operation. The terrorists originally announced that if their demands were not met by July 1, they would kill the hostages. But, thinking that the Israelis were serious in their willingness to negotiate, the PFLP extended their deadline by 72 hours, which was crucial in planning the rescue mission.

Secondly, the PFLP freed 150 non-Jewish passengers. Some of these freed hostages provided information to the Mossad about where the Jewish hostages were being held, and where the terrorists were placed.

By July 3rd, the Mossad had coordinated its plans, which were subsequently approved by Rabin and Peres.

On that date, four Israeli transport planes and a Boeing 707 set out at 3:00 in the afternoon from Sharm el-Sheikh, in the Sinai. The planes flew along the coast to avoid being detected. The flight lasted seven hours, and they arrived in Entebbe after dark.

The first transport plane to land carried out the riskiest part of the operation. It coordinated its landing at the Entebbe airport to be at the exact same time as a scheduled British transport plane, in order to avoid showing up on the airport’s radar. Upon landing, also to avoid detection, the Israeli tactical unit left the plane in two Land Rovers and a Mercedes, the very same entourage that was used by Idi Amin.

When the team arrived safely at the building holding the hostages, they surprised the PFLP members and were able to kill all the terrorists with little resistance. Three hostages were killed in the crossfire, and a fourth victim, being held at a Ugandan hospital, was later killed by Ugandan soldiers.

In the meantime, the other three transport planes landed, carrying more tactical unit members. All four transport planes were able to coordinate themselves through radio command in the hovering Boeing plane. The extra Israeli units were able to take out the Ugandan soldiers who were guarding the airport, and ensure safe exit for the hostages. From the time the first plane landed to the time the last plane left, with all the hostages on it, less than two hours had passed.

The world reaction to the operation was mixed. Idi Amin tried to get the UN Security Council to condemn the operation, claiming that Israel had intruded into Uganda’s sovereignty. The request was  eventually rejected, but only after UN Chief Kurt Waldheim called Israel’s action “a serious violation of the national sovereignty of a United Nations member state.”

The only Israeli military officer to die in the attack was Lieutenant Colonel Yonatan  (Yoni) Netanyahu, the brother of future Prime Minister Benjamin Netanyahu. Yoni, the leading commander in the operation, was shot in the chest in the gun battle to take over the building holding the hostages.

Netanyahu’s death entered him into Israeli folklore as a military hero. In the movie Victory at Entebbe, released only six months after the operation itself, Netanyahu, portrayed by Richard Dreyfuss, was the title character.

In his personal diary, Shimon Peres described his reaction when he heard about Yoni’s death: “At four in the morning, Motta Gur (then IDF chief of staff) came into my office, and I could tell he was very upset. ‘Shimon, Yoni’s gone. A bullet hit him in the heart.’ This is the first time this whole crazy week that I cannot hold back the tears.”

The Six-Day War and its Aftermath 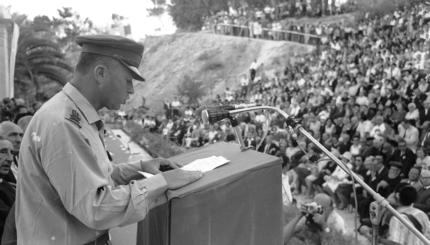