And he dreamed and behold a ladder stationed on the earth and its top reaches the sky, and behold the angels of God ascending and descending on it. And
behold God stands above it … (Genesis 28:12-13)

The ladder that Jacob climbed in his dream was viewed by the Jewish sages as a symbol that represents and links different worlds. A midrash in the medieval collection on the Book of Genesis, Bereishit Rabbah, interpreted verse 12 as follows:

And behold a ladder–this is the incline [leading to the Temple altar]. Stationed on the earth–this is the altar, as it says (Exodus 20:21), “Make for me an altar of earth.” And its top reaches the sky–these are the offerings whose fragrance rises to heaven. And behold the angels of God–these are the high priests. Ascending and descending on it–that is, they ascend and descend on the incline. And behold God stands above it, as it says (Amos 9:1), “I saw God standing on the altar.”

The Rabbis also understood the symbol of the ladder in Jacob’s dream as Sinai: “And he dreamed and behold a ladder — this is Sinai. Stationed on earth — as it says (Exodus 19:17), ‘They stood at the base of the mountain.’ And its top reaching the sky — as it says (Deuteronomy 4:11), ‘And the mountain was alight with fire unto the heart of the sky.’

“An alternative word on this matter: And behold a ladder–this is Sinai, for the numerology of the letters of ladder are equal to those of Sinai (namely, [in Hebrew, where each letter equals a number], they both add up to 130).”

The Meaning Behind the Altar

This midrash describes two possibilities for linking the earth to the heaven: the world of the altar, the Temple, and sacrifice on the one hand, and the world of revelation at Sinai on the other. We can see these two sets of images as symbols for, respectively, historical and mythological reality.

But the Rabbis of the talmudic and post-talmudic periods, having lived after both the revelation at Sinai and the destruction of the Temple, lacked an experiential and spiritual connection to either. Because neither Sinai nor the altar was a concrete phenomenon for the Rabbis, they developed these “memories” into metaphors.

The Rabbis viewed the altar as the primary element through which human sins are atoned. In rabbinic literature, the idea of the atoning altar is found in the context of the pain and affliction that people experience (Babylonian Talmud, Tractate Berachot). The Zohar, the medieval founding work of Kabbalah, likens the act of fasting to the atoning altar. When a person undergoes pain or suffering, be it volitional or circumstantial, he or she is given the opportunity to draw near to God.

Perhaps in this lies the connection between the word for nearness, kirvah, and that for offering or sacrifice, korban. The implication of this linguistic affinity may be that a person’s suffering–his or her loss of that which fulfills needs and desires–may serve as a means of drawing that person closer to God.

Sinai, the place where the greatest, most central revelation in the Jewish tradition occurs, also serves as a metaphor for a renewing and developing tradition. For the Rabbis, Sinai is the most accessible “data base” of the Jewish tradition. A midrash in Vayikra Rabbah (a medieval collection on the Book of Leviticus) states that what a student will say to his teacher in the future already was revealed to Moses on Mount Sinai. Simply put: the renewal of the Jewish tradition already is included in its foundation, as part of the revelation.

A Metaphor about Mankind

In his book Ruah Chaim (“the breath of life”), Rabbi Haim of Volozhin (a student of the Vilna Gaon and the pre-eminent sage of Lithuanian Jewry; 1749-1821) writes:

Our sages come to teach us that we ought not think that, because of our base material, we are truly despicable, like mere plaster on a wall. About this it says, a ladder stationed on the earth–that is Sinai; and its top reaches the heaven–which represents our soul’s life, which is in the highest sphere. There are even souls that see God, and they are the highest of the high, higher than ministering angels, and by this status can the soul cleave to Torah. A whole person is like a tree whose roots are above, and whose trunk extends downward, which is the body, and which is fastened to its supernal roots.

Thus, Rabbi Haim of Volozhin views Torah learning as a Sinaitic event, since Torah is what connects the heavens and the earth. With Torah, one can ascend and descend between the two spheres. The people who do so are angel-like.

Each of us can dream his or her spiritual dream on the “ladder” that extends from the earth to the heavens. By doing so, to use the metaphors above, we can view formative experiences as an altar or as Sinai. We can think of “ascent” as an opportunity for internal spiritual growth and service, and of “descent” as re-entering the external world and trying to change it for good. In the words of the great Hasidic master, Rabbi Menachem Mendel of Kotzk, interpreting a verse from Psalms, “The heavens are the heavens of God, and the earth is given to human beings’–that is, to make of the earth a heaven.” 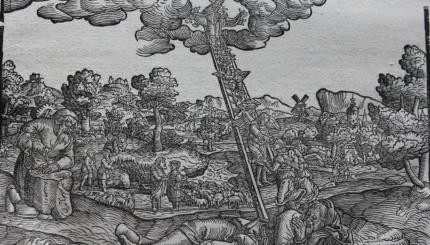 Jacob's covenant with God teaches us that our relationships with God must not be conditional, but rather should be built on trust.

Like Jacob, who paid attention to Joseph's dreams, we should be mindful of events and experiences that evoke a sense of the Divine presence.