As we’ve seen in recent days, while she resides in her father’s household, a girl’s vows are subject to his approval. But upon her engagement, this power to ratify or annul her vows is shared with her betrothed. As we have learned, both the father and the fiance must annul the vow on the day they find out about it in order for it to be canceled. If only one (or neither) of them do, the vow stands.

On today’s daf, we read a mishnah that injects an odd detail into this scenario:

If she took a vow while betrothed and then was divorced on the same day, and she was again betrothed on the same day (to another man), or even to 100 men, her father and her last husband (i.e the man to whom she is currently betrothed) nullify her vows.

The mishnah concerns a case where a betrothed woman makes a vow, but before anyone acts upon it, her intended breaks off the engagement, which requires him to grant her a bill of divorce. Then she becomes engaged to another. In such a case, her father and new fiance can jointly annul her vow. And if the situation continues to repeat itself, no matter how many times, as long as it is the same day, her father and her final partner have the authority to annul her vow.

The Gemara gets curious about how this works exactly.

The Gemara’s question concerns the impact of divorce upon the vow. Is divorce akin to silence, meaning that it’s neither an affirmation nor an annulment of the vow and therefore has no impact on it? Or is divorce a sign that the ex-fiance approves of the vow and that it should stand? And why does it even matter? After the couple is divorced, the woman is no longer subject to her former betrothed and what he thinks about her vow shouldn’t make a difference.

Except that it does, says the Gemara, in this case: The woman took a vow, her betrothed heard the vow, then divorced her, and then the couple got engaged again. If divorce is like silence, he should still be able to nullify her vow. But if divorce indicates ratification, he can no longer do so, as the divorce affirmed her vow and now it cannot be rescinded.

The Gemara will address this question on tomorrow’s daf. But before we move on, there’s a further matter to look into. If divorce affirms the vow, we have a problem with our original reading of the mishnah. There we learned that if a betrothed woman makes a vow, divorces, and then is betrothed to another, it is her final (or current) betrothed who has authority to nullify her vow. Buf it the ex-fiance’s divorce affirms the vow, how can a subsequent partner annul it? The mishnah seems to say that the latter partner can do precisely that. So if you’re of the opinion that silence equals affirmation, how can you understand the mishnah?

One solution is to introduce a new detail into the case of the mishnah. Perhaps when the girl takes a vow on the day of her multiple engagements, it is only her father who hears it and not her betrothed. If this were so, then the divorce wouldn’t affect the status of her vow because her fiance is not yet aware of it. So if the father wants to annul it, he can partner with any man to whom she is engaged.

In answering the question about how divorce impacts a betrothed woman’s vows, the Gemara winds up bringing a case that creates a problem for the original mishnah. As a result, it pushes us to reinterpret the mishnah by adding a detail that was not a part of our original understanding.

The Gemara does not reach a conclusive decision here about whether the husband’s silence should be taken as approval or not. Nor does it let us know which reading of the mishnah it favors, leaving us with a number of possible understandings about who heard the vow, when they heard it, if and when it can be annulled, and by whom. The commentators have a field day with all of these questions, and you can too if you are looking for a juicy post-talmudic debate that went on well into the Middle Ages.

But if you just want to skip to the end (spoiler alert!), the Shulchan Aruch (Yoreh De’ah 234:13) ultimately holds by our original reading of the mishnah: “If a girl makes a vow while she is betrothed and is then divorced, and then is betrothed to the original man or another, her father and the final betrothed annul her vows.”

And while the Shulchan Aruch doesn’t address it head on, this ruling indicates that it also holds that the betrothed’s silence is just silence, allowing the successor to step in to annul the girl’s vow with her father if they choose.

Read all of Nedarim 71 on Sefaria.

This piece originally appeared in a My Jewish Learning Daf Yomi email newsletter sent on January 4th, 2022. If you are interested in receiving the newsletter, sign up here.

Did he actually hear her?

All the single ladies. 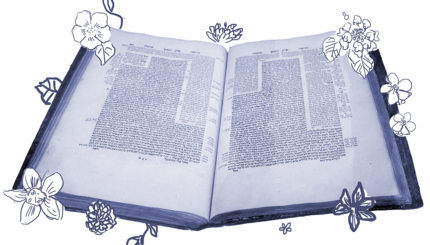