Moses teaches Israel about the centrality of repentance (Ch. 30), and then he prepares for his final message to his people:

(1) And Moses went (vayeilech) and he spoke these words to all of Israel. (2) And he said to them, “One hundred twenty years old am I today; I am not able (lo ukhal) any longer to go out and to come in, and Hashem has said to me, ‘You will not cross this Jordan.’ (3) Hashem your G-d, He is the One Who passes before you; He will destroy these nations before you and you will possess them; Joshua, he is the one who passes before you, as Hashem has spoken. (4) And Hashem will do to them as He did to Sichon and to Og, the kings of the Emorites, and to their land, which He destroyed. (5) And Hashem gave them before you, and you shall do to them according to all the commandment that I commanded you. (6) Be strong and courageous; do not fear nor panic before them, because Hashem, your G-d, He is the One Who goes with you; He will not fail you nor forsake you.”

(7) And Moses called for Joshua and said to him before the eyes of all Israel, “Be strong and courageous, because you will come with this nation, to the land that Hashem has sworn to their fathers to give them, and you will cause them to possess it. (8) And Hashem, He is the One Who goes before you; He will be with you; He will not fail you nor forsake you; do not fear nor be dismayed” (Deuteronomy 31).

This passage, especially the first two verses, raises a number of questions:

Let us see how different commentaries address these questions.

Moses’s Going As Expression of His Relationship to His People

Ramban (Nachmanides) notes that, in Nitzavim (as the name of that portion suggests) all of the people were “standing,” assembled before Hashem. Afterwards, they returned to their tents. Now, Moses went from the Levite camp to the Israelite camp in order to honor them, like one who wishes to take his leave from his friend and goes to receive permission from him. In preparing to die, Moses shows them respect.

Ibn-Ezra (12th-century Spain), on the other hand, sees Moses’s going as a form of kindness to the people:

He went to each tribe to inform them that he is dying and that they should not be afraid, and he encouraged them with the words spoken to Joshua [verses 7-8].

Chizkuni (Chizkiya ben Manoach, mid 13th century) notes that Moses goes to the people, instead of assembling them by sounding the trumpets (Numbers 10:1-10). This is because (Midrash Tanchuma Beha’alotecha 10), as Moses was about to die Hashem took the trumpets, which symbolized Moses’s role as ruler, and concealed them, since “there is no dominion on the day of death” (Ecclesiastes 8:8). Moses’s “going” indicates his loss of dominion.

The Targum (translation of the Torah into Aramaic), ascribed to Yonatan ben Uziel, interpolates:

And Moses went to the Tabernacle bet Midrash. Moses goes to the House of Study to transfer his authority to Joshua.

Moses’s Going As a Method of Instruction

Sforno (Ovadia ben Yaakov Sforno, c. 1470-c.1550) does not translate vayelekh as and he went/walked, but as “he bestirred himself, took the initiative,” as in:

And there went a man from the house of Levi (Exodus 2:1).
And he went and worshipped (Deuteronomy 17:3).

Moses roused himself to comfort his people in the face of his imminent death, so they would accept the covenant he had just taught them in joy.

Finally, Keli Yakar (Ephraim Shlomo of Luntshitz, 1550-1619) offers two explanations for Moses’s going, one to indicate a change in Moses, and one to bring about a change in the people:

1) Vayelekh means “and he walked about,” without reference to his point of departure or destination. Since lo uchal (verse 2) could mean either “I am not able” or “I am not permitted,” Moses needs to make it clear that it is not that Moses is physically unable; at the time of his death “his eye was not dimmed nor was his freshness departed” (Deuteronomy 34:7). Rather, he is not permitted to lead; leadership has been transmitted to Joshua. Therefore, he walked about vigorously, showing them that he is still as capable as ever, despite his age of 120.

Actually, this idea is reflected in Rashi: I am not able any longer to go out and to come in matters of halakha (Jewish law), for the sources of wisdom have been closed to him. Moses walks about to demonstrate his loss of authority and Divine inspiration.

2) Vayelekh means “and he approached.” Furthermore, “and he spoke these words to all of Israel” refers to the previous passage about the importance and accessibility of repentance (Ch. 30); “words” often alludes to repentance, as in the beginning of the book of Deuteronomy and “Take with you words and return to Hashem” (Hoshea 14:3). Before his death, Moses wishes to motivate the people to repentance. However, since most people do not recognize their own faults, he needs to approach them to inspire repentance.

Keli Yakar sees Moses’s assertiveness as influenced by a desire for peace; he develops his thesis that we are obligated to pursue peace actively (Vayikra Rabba 9:9), because peace benefits all parties concerned, and, ultimately, our collective connection to Hashem.

Moses and Joshua possessed leadership characteristics that we continue to look for in our leaders today. 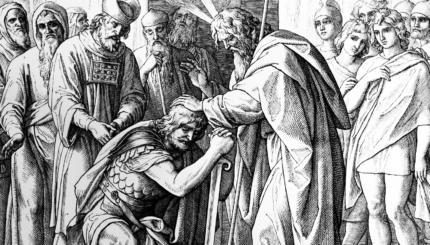 Why is Moses reluctant to hand over leadership to Joshua?