Judaism values both study and action. The Talmud teaches that the study of Torah is greater than all other commandments (Shabbat 127a), and yet the rabbinic tradition is obsessed with the minute details of ritual and ethical behavior. As a passage in Pirke Avot teaches, “It is not the study that is essential, but rather the action (1:17).” This latter source suggests that the rabbis understood that while study and action are both fundamental components of the religious life, they are also in tension with one another. So which is more important, study or action? How do we balance these two priorities?

In a frequently cited passage from the Babylonian Talmud (Kiddushin 40b), Rabbi Akiva and Rabbi Tarfon debate this very question:

Rabbi Akiva’s opinion is sensible. Both study and action are essential, and thus we should prioritize the one that facilitates the other. Action may occur in the absence of study, but, according to Akiva, study itself will prompt and inspire action. Yet this solution is curious, as well. If action is the ultimate goal, why not bypass study altogether?

The answer is that study not only leads us to action, it leads us through action. Study offers us guidelines for what kind of action to take. In the realm of social justice, our learning outlines the nature of our obligations. For example, the Torah defines our duty to pay workers fairly and promptly. The principle of pikuah nefesh–the prioritization of saving human life–is articulated in the Talmud. And Maimonides codifies for us how much charity we should give and to whom we should give it.

Indeed, though Rabbi Akiva’s principle seems to imply that study could lead to action, there are many rabbinic sources that seem to accept Akiva’s principle yet suggest that study must lead to action. According to the rabbinic sage Rava, “The purpose of learning is repentance and good deeds (Berakhot 17a).” In another source, another sage, Rav Huna, articulates this sentiment even stronger: “He who occupies himself only with studying Torah acts as if he has no God (Avoda Zarah 17b).”

The Source of Responsibility

Of course, learning Torah only facilitates action if we’ve learned where our acts are needed. Interestingly, the relatively obscure laws of met mitzvah (“a person one is obligated to bury”) give us insight into this type of learning.

A met mitzvah is a murder victim found in the wilderness. The Torah stipulates that the elders of the town closest to the corpse must take responsibility for it. They must bury it, sacrifice a heifer, and then make this unusual declaration: “‘Our hands did not shed this blood, nor did our eyes see it done.’ (Deuteronomy 21:8)”

Why do the elders have to explicitly state that they did not perpetrate the crime? Would we really have suspected them? The mishnah in Sotah (9:6) explains:

“The elders of that town washed their hands in water at the place where the neck of the heifer was broken, and they said, ‘Our hands have not shed this blood neither have our eyes seen it.’ But could it be that the elders of a Court were shedders of blood? [They meant], ‘He came not into our hands that we should have dismissed him without sustenance, and we did not see him and leave him without escort!'”

According to the mishnah, the elders’ statement is an acceptance of broad responsibility. Because they didn’t see the man, they didn’t provide him with food or security. But if they had seen him and had failed to provide him with those things, they would have been culpable for his fate, even though they didn’t act directly against him. Knowledge of an injustice or an imminent danger creates responsibility and an obligation to act.

Parallel events in the last two decades provide us with a case study to explore this phenomenon. The tsunami of December 2004 killed some 225,000 people and elicited the greatest outpouring of humanitarian aid in human history. We embraced our obligation to help and responded with extraordinary generosity.

But before the tsunami of 2004, there was another tsunami, in April of 1991, in Bangladesh. This disaster killed nearly 140,000 people. Few people remember it and there was little in the way of international response. Why the difference?

In 1991, we knew of our obligation to help alleviate suffering as well as we knew it in 2004. The difference was that we saw the tsunami of 2004. It struck vacation destinations filled with tourists toting video-cameras. We watched the tsunami on television. We were able to witness and “learn” the event in a palpable, visceral way. And because we saw it, like the elders in Deuteronomy, we accepted responsibility for the well-being of the victims.

In stark contrast, the tsunami in Bangladesh received limited coverage in the media. It was like the met mitzvah–something we didn’t see and, therefore, something we could reasonably claim to ignore.

The lesson seems to be that in order for us to realize Akiva’s proposition, that study leads to action, we need to not only accept the responsibility to act, but also expose ourselves to the circumstances in which action is necessary.

But here, too, there is a fine balance. The world is filled with suffering and injustice and immersing ourselves in it too deeply can be paralyzing. It can lead to what the essayist Annie Dillard calls “compassion fatigue”–being overwhelmed by the magnitude of a problem and thus stricken with an inability to act.

Our tradition anticipates and addresses this challenge, as well. In Pirke Avot, we read, “You are not required to complete the work, but neither are you free to desist from it.” Or as Ruth Messinger, the President of American Jewish World Service says, “The numbers are overwhelming, but we cannot retreat to the convenience of being overwhelmed.”

Why Stay Up All Night Studying Torah?

Tonight, Jews across the world will pull an all-nighter. Some will sit in synagogue all night long; others will â€œshul-crawl,â€ ... 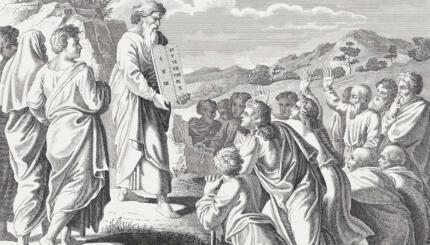 We Will Hear and We Will Do

Is it better to act out of volition or obligation?