The third chapter of Tractate Ketubot, which begins on today’s daf, largely deals with the fines incurred by a rapist or a seducer who has intercourse with a virgin na’arah. A na’arah, as we learned in Yevamot, is a girl with two pubic hairs between the ages of 12 years and one day and 12 and a half, at which time she becomes a bogeret, an adult woman.

Deuteronomy 22:28-29 provides some useful context for our discussion: “If a man comes upon a virgin maiden (na’arah betulah) who is not betrothed, and he seizes her and lies with her, and they are discovered, the party who lay with her shall pay the girl’s father 50 [shekels of] silver, and she shall be his wife. Because he has violated her, he can never have the right to divorce her.”

The mishnah at the top of today’s daf delineates various types of young women who are entitled to the fine stipulated in the Torah. We will examine the first of these categories today:

Interestingly, the mishnah opens its discussion with three categories of women whom a Jewish man is barred from marrying. As a reminder, a mamzeret is a girl born of a forbidden union who is only permitted to marry another mamzer. Gibeonites and Samaritans were peoples who lived in ancient Israel and interacted with Jews, but they are not Jews themselves, so they too would normally be forbidden as marriage partners.

Why would the mishnah start off by spotlighting women that the rapist would not be able to marry, in apparent contradiction to the commandment in Deuteronomy, which makes no stipulation about which assault victims are entitled to fines and marriage? Rashi notes that we might think these women are not entitled to a fine because they are not deemed fit to marry a Jew. The mishnah comes to teach us that they are still entitled to one. And while a mere fine might seem an unsatisfactory consequence, incarceration is largely absent from the Talmud, with the rabbis (and the Torah) favoring financial or corporal punishment for nearly all crimes.

By beginning with a ruling that a rapist is liable for the significant fine of 50 silver shekels if he assaults a mamzeret, a Gibeonite or a Samaritan woman — members of some of the most marginalized groups of their time — the mishnah places value on their pain and suffering. By doing so, the Talmud is affirming that all these survivors, no matter their status, are due equal justice under the law.

Read all of Ketubot 29 on Sefaria.

This piece originally appeared in a My Jewish Learning Daf Yomi email newsletter sent on August 4th, 2022. If you are interested in receiving the newsletter, sign up here. 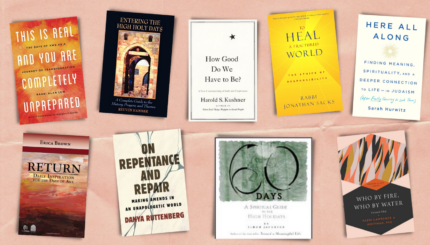 9 Books To Prepare You For the High Holidays

Spiritual preparation for Rosh Hashanah and Yom Kippur can make the holidays that much more meaningful.