Since the advent of The Simpsons in 1989, the animated prime-time genre, which primarily targets adults instead of children, has been one of the most creative zones in contemporary television.

Shows such as The Simpsons, South Park, and Family Guy have delivered some of the most consistent laughs on TV, creatively skewering American life and culture from an infinite range of perspectives. Centered around a single family or a set of friends, these three series have steadily spiraled outward to encompass a miniature universe of walk-on characters, among which a number of Jews are present.

Each show has also, on occasion, poked fun at Judaism and American Jewish life. The tone, for the most part, has been strikingly gentle–almost tender, preferring to use Judaism for nostalgic or satiric material rather than out-and-out savaging it. While other animated series have milked Jewish material–the children’s show Rugrats, which featured Jewish characters and released Passover and Hanukkah specials, foremost among them–it is these three series that have had the most significant impact on American culture.

With so many writers of television comedy being Jewish, it should be no surprise that these animated series all eventually took a crack at crafting Jewish-themed episodes. The freedom granted by animation allows for an inordinately wide-ranging approach to comedy, far more so than for its live-action counterparts. Judaism was hardly the focus of these series; it was only one in a nearly infinite array of subjects deemed worthy of being run through the animated wringer.

As the granddaddy of them all, The Simpsons was the first of these three shows to foray into Jewish material. The show’s imaginary Springfield was stocked, as the show progressed, with a seemingly infinite array of supporting characters: sailors, stick-up men, doctors, convenience-store clerks, and a dazzling assortment of oddballs and kooks.  Among the most memorable and endearing, was the cynical children’s-show host Krusty the Clown, who was revealed in the show’s third season to be Jewish. His real name: Herschel Krustofski.

Krusty’s tragic backstory–disapproving father and conflicted feelings about his heritage–was lifted directly from The Jazz Singer. The Simpsons offered some fine comic touches of its own, such as Krusty’s father’s response to his son’s clowning: “If you were a musician or a jazz singer, this I could forgive!” The Simpsons would return to Krusty’s Jewish roots a few more times, with legendary comic Jackie Mason providing the voice of Rabbi Krustofski.

The Simpsons was genial in its jibes. South Park, which debuted to much acclaim in 1997, adopted a take-no-prisoners attitude, spraying fire in every possible direction. Religious ideologues, Scientologists, and do-gooder Hollywood types bore the brunt of South Park‘s fury, but the presence of 8-year-old Kyle Broflovski, along with his parents Gerald and Sheila (who share their names with series co-creator Matt Stone’s parents), made for the occasional Jewish joke. Kyle’s parents are stereotypical Jews, nervous and neurotic, but South Park mocks the stereotypes at the same time that it luxuriates in them.

Kyle in particular is the butt of his friend Eric Cartman’s jokes and anti-Semitic jibes (“you dirty Jew!” is a particularly popular one). The brilliantly odious Cartman is forever attacking Kyle for being Jewish (“You see, guys,” he tells his friends as they pretend to explore an alien planet, “this is why you don’t bring Jews along on the away team.”) Kyle, though, is far smarter than the moronic Cartman, and is easily capable of bending him to his will when so inclined.

In the series’ most memorable Jewish-themed episode, “The Passion of the Jew” (2004), Kyle is troubled after watching the Mel Gibson film The Passion of the Christ. Were the Jews responsible for killing the Lord? Meanwhile, Cartman, dressed as Hitler, forms a Passion club for the citizens of South Park. The members see it as an opportunity to rekindle their Christian faith, while Cartman goose-steps past a synagogue and plans to round the Jews up into camps.

Mel Gibson eventually shows up, demanding to be tortured and smearing excrement on the walls, and Kyle is relieved: “Dude, I’ve been freaked out this whole time because of that guy’s movie?” Given the generally misanthropic tone of South Park as a whole, Jews get off lightly.

Family Guy made a belated entrance into the Jewish sweepstakes with the episode “When You Wish upon a Weinstein,” originally broadcast in 2003. Dim-bulb father and husband Peter Griffin, lamenting the state of his family’s finances, takes note of his friends’ financial consultants–all men with names like Rosenblatt and Greenstein. Peter decides to take action, and find a Jewish money-man of his own. His sensible wife Lois demurs: “Peter, not every Jewish person is good with money.” Peter takes umbrage, his Rhode Island accent twanging with contempt: “Yeah, I guess not the retarded ones, but why would you even say that–for shock value?”

Nodding to Mel Brooks, Woody Allen, Seinfeld, and The Graduate, the episode is a grab-bag of Jewish-comedy references. Peter even gets the opportunity to perform a Brooks-esque musical number documenting his Semitophilia: “Though by many they’re abhorred/Hebrew people I’ve adored/Even though they killed my Lord/I need a Jew.”

As illustrated by the show’s references, Family Guy‘s notion of Judaism–even of Jewish comedy–is a bit musty. But the episode’s comedic inversion of The Graduate is ingenious. Lois interrupts her son’s bar mitzvah (Peter thinks a hasty conversion will make him smarter) by banging dramatically on the synagogue’s glass walls, and uses a Star of David to fend off angry congregants.

Still, there was something formulaic about Family Guy‘s foray into Judaism, which made “Family Goy,” an episode from 2009, a more satisfactory enterprise. “Family Goy” found Lois unexpectedly discovering her family’s Jewish heritage, with her mother disguising her roots to blend into her father’s patrician family. Peter, of course, embraces his family’s new religion at first (“I’m Jewish!  Yeah!  Holocaust!  #1!”) before residual Catholic guilt sets in, and he recoils.  Scheming infant Stewie (voiced by the inimitable Kelsey Grammer) similarly takes a jaundiced view of Jewish culture, learning about Hanukkah at his preschool: “Yeah, yeah, how long before we play pin the eviction notice on the black guy’s door?”

The episode cleverly intersperses insider jokes, like Peter’s new Jewish name (pronounced “ch-ch-ch-ch”) and his response when Lois tells him she is having a Passover Seder: “You can’t do that–it’s Easter!” Jesus must eventually arrive to settle matters, solemnly informing Peter that the Lamb of God, too, was a Jew. “Prove it!” Peter demands. “What’s a 9% tip on a $200 bill?”  “$18,” Jesus responds. “Which is fair.”

Unfettered by the physical, financial, and logistic limitations of live action, animation has been blessed with the freedom to roam. For shows like The Simpsons, South Park, and Family Guy, every new episode was an opportunity to slay a new dragon, or undermine another sacred cow. Religion was merely another opportunity to satirically jab at the cherished assumptions of American life, and Judaism another target ripe to be shot at. Tweaking the stereotypes, these fresh takes on Jewish life and culture always made sure to have the last laugh. 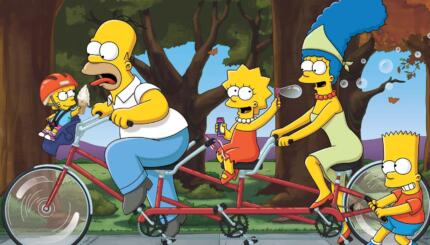 What’s Jewish About “The Simpsons”?

Jews & Judaism pervade this classic animated sitcom and its fictional town of Springfield.

When religion is brought up on television, Judaism is more often than not portrayed in a negative light.