Mel Gibson’s 2004 film The Passion of the Christ provoked intense controversy, with Jews and many Christians saying it depicted Jews in an anti-Semitic fashion, perpetuating the belief that Jews were responsible for Jesus’ death. In the following piece, the author separates fact from fiction in the Passion story, offers her personal thoughts, and calls for Jews as well as Christians to learn more about each other’s religion and beliefs. It is adapted with permission from a sermon Lenk delivered at a synagogue in Newton, Mass., on March 6, 2004.

After seeing Mel Gibson’s film I feel no hesitation calling it anti-Semitic. The film depicts Jews as inexplicably hateful, rejecting a holy man, seemingly for no reason except their hatefulness. In a hallucination suffered by Judas, little Jewish boys turn into little demon children. Pontius Pilate is a handsome, gentle, and wise ruler, who regretfully gives into the wishes of the uncontrollable Jews, in order to avert a rebellion.

I am writing, however, not as a movie critic, but as a scholar, and want therefore to look at the following questions raised by the film:

2) What role did the Jews actually play in the death of Jesus?

3) What role did Pilate play?

4) What is wrong with Mel Gibson’s take on the story?

First: We have no documents contemporary to the event that record the death of Jesus. Paul is the earliest Christian writer, and he never met Jesus. However, he knows that Jesus was crucified, and this event is the central event for Paul’s faith. Paul knows almost nothing about Jesus’ life, but only about his death.

The gospel writers wrote no less than a generation after Jesus’ death–between 75 and 100 C.E. They were not eyewitnesses to the events of Jesus’ life and death.

Second: The gospels were not written as historical documents. They are rhetorical works, meant to persuade people as to the correct faith. This, in part, accounts for the many contradictory accounts in the different gospels. One example: According to the synoptic gospels (Matthew, Mark and Luke) Jesus was captured, tried, and killed on the first day of Passover, and the “Last Supper” was a Passover meal. According to John, the Last Supper took place the night before Passover, and Jesus was crucified on the afternoon before Passover–slaughtered together with the paschal lambs–as a paschal lamb. This imagery is carried into later Christian liturgy.

Historians have argued that it is highly unlikely that the priests would have gathered for a trial just at the time when so many pilgrims were entering Jerusalem and just when there was so much festival activity at the Temple. However, all four gospels have a tradition connecting Jesus’ death with Passover. And telling his story in this way certainly gives it a particular meaning.

As to the question of Jewish responsibility, it seems that Caiphus, the high priest, together with other Jews, did want to get rid of Jesus. According to the gospel accounts (echoed in Gibson’s film) they are particularly concerned about his claim to be Christ (Greek for messiah). And why was that such a threat? Because claiming to be messiah (which mean, anointed) was a claim to be the king. (Kings of Judah and Israel were anointed). Perhaps many Jews were afraid that a powerful, charismatic Jew with many followers, who claimed to be king, would be perceived as a threat to the Romans.

In the early first century, Judea was a Roman province, and Jews there were permitted to live in relative freedom. The rise of a messiah, or a Jewish king, could be seen as the beginning of a rebellion.

What Was Pilate’s Role?

Who crucified Jesus? According to all four gospels, the Romans crucified Jesus. Crucifixion was a Roman form of punishment, used especially against those perceived as political threats. Jews in Judea would not have had the authority to put anyone to death.

Pilate was known by his contemporaries as ruthless and brutal–as an absolute tyrant. One film reviewer suggested that Gibson gave Pilate the role that the Jews may have felt: “damned if I do, damned if I don’t.” However, the historian? philosopher? Philo (a contemporary of Pilate) described Pilate’s “habit of insulting people, and his cruelty, and his continual murders of people untried and uncondemned, and his never ending, and gratuitous, and most grievous inhumanity.”

The Nicean Creed–a central statement of doctrinal Christian faith written in the year 325–declares that Jesus “was crucified under Pontius Pilate.”

Why Do the Gospel Writers Blame the Jews?

In the first century, as Christianity was beginning to grow, followers of Jesus who were trying to spread the gospel lived in the Roman Empire. Many Roman rulers suspected Christians of sedition, as they met in small groups, privately, in houses. Christians were eager to prove that they were loyal citizens of Rome. Except perhaps in the Book of Revelation, one does not find anti-Roman sentiment in the New Testament.

Jews, however, who were also a minority in the Roman Empire, were available as targets. Christians were eager to point out how their faith was different from that of non-Christian Jews. That is, while seeing Christian faith as the fulfillment of the Torah and the prophets, many Christians wanted to show how they were different from Jews, arguing that many Jews did not understand their own Scripture.

In creating a single text for his movie script, Gibson picked out the pieces he would use from each of the gospels. In doing so, he made choices about how he wanted to shape his film. He chose every anti-Jewish line from all four of the Gospels. He also inflamed the anti-Jewish depiction by added material based on the mystical visions of two medieval nuns.

Every depiction of the Passion (the suffering and death of Jesus) is not anti-Semitic, although some depictions have been. It is important to sensitize Christians to be aware and responsible in their depictions. It is also time for us to understand why so many Christians are moved–many to tears–by the Passion.

Some scholars have suggested that the stories of Jesus’ life in the gospels are merely preludes to the main event, which is the passion. Jesus himself speaks to his disciples, numerous times, of the inevitability of his suffering and death, and the literary shape of the gospels supports this reading. For Christians, the concept of God coming to earth, taking on a human body, and suffering for the sake of all humanity is a very central concept of their faith. It is a very powerful idea: Whatever a human suffers, God suffered more, in order to bring salvation for humanity.

Many Christians have criticized Gibson’s film, arguing it seems to imply that Jesus suffered because of the Jews, rather than because of the sins of all of humanity. Others have worried that Gibson glorified the gore, in much more detail than one finds in any of the gospel accounts.

While Jesus’ suffering is present in all of the Gospels, they significantly understate the details of the suffering. After over two hours of torture, Gibson gives less than 30 seconds to the Resurrection, an event of great theological import for many Christians. Others are deeply dismayed by Gibson’s neglect of Jesus’ life and teachings, of any indication of what Jesus represented, aside from suffering.

A Chance to Learn

In emphasizing our need to try to understand the power of the theology of Jesus’ suffering, I do not mean to justify any and every depiction of it. We know that Passion plays notoriously led to pogroms in medieval and even modern history. However, rejection of anti-Semitism need not lead us to rejection of entire narratives that have meant so much to so many Christians.

As an adult, a teacher of Jewish texts, while living in Israel I became involved in interfaith dialogue. I met Christians who inspired me, from whom I knew I had much to learn. They were eager to clear up my misconceptions about their faith. And in return, they were eager to learn from me about mine. I began to teach in Christian seminaries in Jerusalem, and was privileged to teach many members of the clergy–church leaders, ministers, priests, and nuns. I believe that they were open to learn about Judaism from me because I was equally open to learn about Christianity from them.

Many Christian and ecumenical groups are working tirelessly on the project of mutual understanding. We Jews need to learn more about what certain symbols, like the Passion, mean to Christians. Christians need to learn why it is that Jews react with such fear at public expressions of anti-Semitism, especially in the context of a Passion play.

Each of us today, Jew and Christian alike, can do our part in bringing more understanding to our already blood-soaked world. Jews today, whether we live in Israel or in the Diaspora, we live in the world. It is not possible to live on our own isolated island, hermetically sealed from the rest of the world.

We all have Christian friends, colleagues and co-workers. We can use the moment of controversy about this film to increase tolerance and understanding.

Three views of the Jewish-Christian schism. 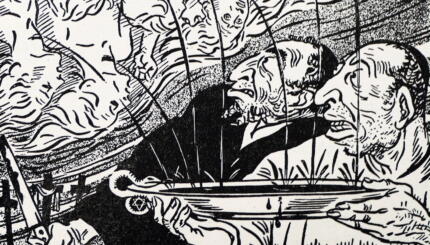 Interfaith relationships between Jews and non-Jews is a hard-hitting issue that affects the entire Jewish world.