When comforting a mourner, we often draw upon familiar expressions that we ourselves have heard others say in such situations. But unex­plained, such expressions often convey messages that leave the mourner puzzled or upset. Be careful when using them.

“What The Mind Cannot Do, Time Will Do”

When we have difficulty accepting a serious blow, we tend to cast our problem into the future and to take no action in the present. We ratio­nalize this avoidance with gems of old wisdom: “What the mind can­not do, time will do”; “All in good time”; “Time will heal”; “Just give it time”; “Time heals all wounds.” The trouble is that it doesn’t. Time tends to cover up problems, not deal with them; to bury them, not make them disappear; to soothe over them, not solve them.

No doubt it is true that with the passage of time the piercing pain of grief will be blunted. But the future is little consolation to mourners. What the effects of time will be is only conjecture at present. Grief must be handled today. A promise that eventually everything will be all right is a therapeutic evasion practiced regularly when there is no immedi­ate answer. But it is an empty promise.

Twentieth-century ethicist Rabbi Eliyahu Dessler said that grief will not just float away and consolation will not arrive spontaneously, given enough time. The days by themselves will not magically bring healing; only God can truly heal. Ha’makom yenahem [May God comfort].

“God Took Him Before He Could Sin”

The idea that a child taken by God is without sin is an ancient truth in the Jewish religion, since a person is considered sinless until he or she has attained the age of maturity (13 for a boy and 12 for a girl). Although such a teaching does not make the death of a child any easier to accept, it may somewhat lighten the mourner’s suffering. Contrarily, it might be taken as a puny excuse for a child’s death, or worse, as a jus­tification that since the child did not sin, his or her death is not so bad. A visitor to the house of mourning must be sensitive to this and choose his or her words carefully.

Precisely such a concern is illustrated by a moving story of a talmudic sage:

When the son of the great Rabbi Yochanan ben Zakkai died, his dis­ciples came to comfort him. Rabbi Eleazer said, “Adam, the first man, had a son who died, and he was consoled. You should also accept con­solation.”

Rabbi Yochanan reprimanded him: “Not only do I have my personal suffering, but now you also wish to remind me of the first man’s suffering.”

Rabbi Yehoshua said, “Job had sons and daughters, and they all died. Yet he was consoled.”

“Not only do I have my personal suffering, but now you also wish to remind me of Job’s suffering,” said Rabbi Yochanan.

Rabbi Yossi entered and said, “Aaron had two great sons and they both died on the same day, and he was consoled. You also should accept consolation.” Rabbi Yochanan said, “Not only do I have my personal suffering, but now you also wish to remind me of Aaron’s suffering.”

Rabbi Shimon entered and said, “David, the king, had a son who died and he was consoled, you also should accept consolation.” And Rabbi Yochanan once again said, “Not only do I have my personal suf­fering, but now you wish to remind me of David’s suffering.”

Finally, Rabbi Eleazar ben Arah said: “I will give you an analogy to your situation. The king entrusted a precious object to one of his subjects. The subject became nerve-wracked and in a constant state of worry. ‘When will I be able to return the object undamaged and un­soiled to the king?’ My teacher, Rabbi Yochanan, you are in a similar situation. You had a son who was a Torah scholar and left this world without sin. Be consoled that you have returned in a perfect state that which the king has entrusted to you.”

Rabbi Yochanan sighed: “Eleazar, my son, you have indeed properly consoled me.”

Of course Rabbi Yochanan was a spiritual giant, and he undoubt­edly processed this spiritual consolation in the depths of his soul, and it was framed by his relationship with God. In fact, the sage was con­soled by Rabbi Eleazar’s words more than by any others.

But we are not likely to meet such spiritual heroes in our communities, and the ques­tion that a comment such as “God took him before he could sin” might trigger is that if indeed the child is without sin, why did God see fit to take him or her at all? Even the thought of this question might cause the mourner more grief than consolation.

Some years ago the 4-year-old child of friends of ours in Palm Springs, in an unguarded moment, walked into the family pool and drowned. My old friend Herman Wouk, the celebrated author, who delivered one of the eulogies, expe­rienced a similar tragedy with his own child at his home in the Virgin Islands many years before. In his eulogy he made this the essence of his remarks: “You are returning your child to God in a state of innocence.”

It proved comforting for the distraught parents, as indeed it must have proven so to the Wouks. Midrash refers to God’s taking special care of children’s souls, and in contemporary times, the renowned rabbi Ezekiel Bennet willed that he be buried only among the infant dead

There is an additional spiritual benefit that derives from this idea of returning to God in innocence. Faithful Jews lay great emphasis on purity, especially at the end of life. The body of the deceased is very carefully ritually cleansed with water in a ceremony called Tahara, which means purification. The shrouds in which he or she is dressed are simple and white. The Viddui confessional prayer that should be recited before the onset of death is designed to purify the person’s soul so that he or she appears before God guiltless. Returning to God after death in innocence, therefore, holds a very high place in the spiritual life of the believing Jew.

This emphasis on purity offers the mourner a comforting image–a state of whiteness What a contrast to the tangled intubations, infec­tious fluids, and the body odors of the infirm, or to the horrific sight of a person killed in a car accident. The image of cleanliness and tidiness befits our image of children in their nurseries and leaves the mourner with a feeling of orderliness and fragrance in place of the griminess of dying.

“May You Know Of No More Trouble”

Offering mourners the encouraging hope that they should know no more trouble is not a particularly helpful pronouncement. Would that it were true! Mourners as well as consolers know that such promises cannot be realistically fulfilled. There will always be some form of pain; no one will be completely free of trouble in the future. There is absolutely no use denying it, even as an ecstatic hope; it is an impossible wish. Suffering is the universal balance of joy, as the night is of the day. Ex­pressing such a hope tends to make all condolences sound like throw­-away poppycock, and not serious, carefully considered wishes.

We find a similar-sounding plea for the impossible in the fervent prayer, traditionally recited at burial: “May God banish death forever.” Do we believe that death will one day vanish from the world? Will death ever be conquered? The spiritual response to the prayer is: “Yes, by God, in some distant future.” And if God can conquer death, can God also not obliterate trouble?

Unfortunately, this line of reasoning is a bit specious. This prayer, calling on God to vanquish death, is not meant to be a goody-goody, implausible supplication by frantic tell-me-anything mourners. It ex­presses a real hope that we can increase the human life span so dramati­cally that the thought of imminent death will seldom intrude upon our minds. Yet despite today’s extraordinary medical advances, it remains completely unthinkable that we could wipe out something as endemic as trouble. Indeed, suffering is indigenous to the human condition, no matter how short or long a human life may be.

Reprinted with permission from Consolation: The Spiritual Journey Beyond Grief (Jewish Publication Society). 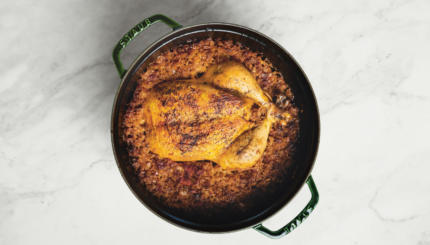 The popular chef recently featured Iraqi t'beet on his podcast.