How Hasidic Wisdom Can Improve Your Life

How Hasidic Wisdom Can Elevate Mealtime

In Pri Ha’aretz, Rabbi Menachem Mendel of Vitebsk’s commentary on the Torah, it states:

It is well known from Proverbs 37:4: “The Lord made everything for a purpose” — and from Isaiah 43:7: “All are linked to my name, created for my glory” — that all the creatures in the world, even the tiniest worm in the sea is necessary for the universe, and that the glory of the creator is revealed more with them than without them. For if it was possible for revelation to happen without them they would not have been created, and thus there is nothing in the world [that is unnecessary] — even the demonic forces and the nations and punishments reflect the glory of God. And this is the secret meaning Psalm 103:19: “his sovereign rule over all” — and of Nehemiah 9:6: “you give life to all.” This is also the meaning of Psalm 104:24: “How many are the things You have made, O Lord; you have made them all with wisdom” — that is, the glory of God that is revealed through this very creature could not have been revealed through another creature.

Like all early Hasidic teachers, the 18th-century Eastern European Hasidic master Menachem Mendel of Vitebsk believed in God’s omnipresence. This core feature of his thought yields the rather startling claim that all aspects of creation are revelatory and filled with infinite worth. When it comes to drawing an environmental ethic from Jewish tradition, this sentiment is a good place to start. But to understand why texts like this speak so urgently to our present moment, it is important to situate it in light of some earlier Jewish ideas.

Our relationship with the world around us—with the 8.7 million species of plants and animals with which we share the planet and the wider environment — has long been a central subject in Jewish thought. Indeed, this relationship has been an object of human speculation for as long as humans have been speculating.

Sign up here for My Jewish Learning’s email series about how Hasidic wisdom can improve your life.

For most of Jewish history, the ideal relationship between the so-called human world and the so-called natural world has been imagined in terms of caring and responsibility, yet emphatically hierarchical stewardship. The central image in the Genesis creation myth is that of the human being as gardener, carefully tending the grasses and the seeds. According to the account in Genesis, humans are the very apex of God’s work, created so that we made “rule the fish of the sea, the birds of the sky, the cattle, the whole earth, and all the creeping things that creep on earth.” Genesis 1:26

Likewise, the heroes of our biblical narratives, from Abraham to Moses to David, are all shepherds, an occupation that represents the Bible’s idealized relationship between God and man. Shepherds bear ultimate responsibility to feed and protect the herd, but retain the ultimate prerogative to do with it as they please. Shepherds guide and nourish, but also milk and breed and in the end take life — not for the animals’ sake or sustenance, but for their own.

Less obviously, the most well-known Jewish approach to environmental awareness — the principle of baal tashchit (“you shall not destroy”) — places human needs squarely at the center. Its source is this passage from Deuteronomy 20:19-20 :

When in your war against a city you have to besiege it a long time in order to capture it, you must not destroy [lo tashchit] its trees, wielding the ax against them. You may eat of them, but you must not cut them down. Are trees of the field human to withdraw before you into the besieged city? Only trees that you know do not yield food may be destroyed; you may cut them down for constructing siegeworks against the city that is waging war on you, until it has been reduced.

Forming the basis of most Jewish explorations of environmental ethics, this passage expresses real concern for the trees. But it is nonetheless shaped by the exigencies of human need and human conflict. The fruit trees are spared precisely because they serve a specific human purpose — namely, they feed armies. The other trees—the non-fruit bearing and (therefore) useless trees—may be cut down with abandon. This approach would be codified some 2,000 years later by Maimonides, who offers a rather striking ruling: “It is permissible to cut down all trees that do not bear fruit, and so too a fruit tree that is damaged and only produces a little bit and isn’t worth tending, it is likewise permissible to cut it down.”

According to this line of thought, the world and all that it contains exists ultimately for us. It is an object that we use, a resource that we mine. It is valuable as a tool, but not as a thing in and of itself. Given this instrumental approach to the world around us, it is no wonder that our shared environment has become an object of plunder, something that, in the present day, we run the real risk of bleeding dry (or melting down).

But when it comes to humanity’s relationship with the natural order, Jewish tradition does offer other paradigms. And in contrast with the thoroughgoing anthropocentrism of mainline Jewish thought, some strains of classical Hasidism open new ways to imagine our relationship to the world around us.

The Hasidic emphasis on the Zohar’s concept leit atar panui minei— the idea that there is no place devoid of God—gestures towards a vision of the natural world that is much less hierarchical. As understood by the Baal Shem Tov, the spiritual progenitor of Hasidism, this dictum evinces a very nearly pantheistic vision, according to which everything from rocks to trees to human beings are quite literally throbbing with the divine presence. Some would even argue that this emphasis on divine immanence is among the core features that distinguish Hasidic thought from earlier trends in Jewish mysticism.

When it comes to the environment in particular, this framework offers us a new way forward. In the text from Menachem Mendel of Vitebsk, and in others like it, we glimpse a new vantage point from which might view the world and our place in it. If we can manage to see even the tiniest worm as indispensable to revelation, as an infinitely important aspect of all that is, then we might also manage to reorient our thinking about who and what we are. Perhaps instead of seeing ourselves as gardeners or rulers, we might see ourselves as seedlings. Just like actual seeds, we are but momentary and fragile expressions of the great majesty of the universe, both irreducible and perishable, necessary but insignificant.

Having thus dismantled the strict hierarchy between man and nature, we might then forge an environmental awareness built around the simple yet audacious notion that we are deeply a part of the world rather than lords over it. Our destiny is not to be stewards or shepherds, but links in a chain. We might grow aware that animals and plants are here for their own reasons, that they have their own destinies and irreducible reasons for being. Only then can we understand that the world is not an object for our use, but the fertile and fragile ground from which we grow. To honor it is to honor ourselves. Or to paraphrase the poet John Donne, every degradation of nature degrades me because I am part of nature.

Jews need to put environmental issues higher on their agenda, the author argues. 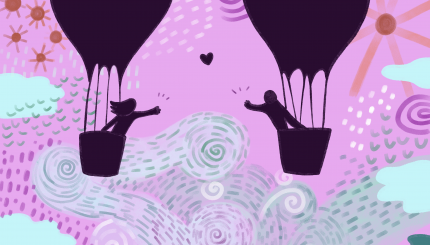 We all want love, but many of us struggle with it. Here are three insights from Hasidic philosophy that can help.