Idolatry is the practice of treating something of relative importance as though it were of ultimate significance.  In our idolatrous age, we often act as though money, careers, sex appeal, or prestige are of ultimate importance, when in fact, they are only worthwhile to the degree that they can contribute to our becoming better, more compassionate and more responsible people.

Parshat Vayera highlights another source of idolatry.  It is altogether common to treat honesty as the highest value possible.  We justify an unkind remark with the observation that it is true; we make a virtue of telling it like it is, regardless of the effects of our self-centered “integrity.”

The conversation between Sarah and God reveals a more caring form of honesty–one that recognizes higher values and transcendent concerns.  Honesty that flies in the face of those values is not a virtue.  It is yet another manifestation of an unhealthy obsession with self–a greater concern with our own clean fingernails than with another people’s feelings.

God reveals to Abraham and Sarah that they will bear a son in a year’s time. Sarah is 90 years old; Abraham is 100.  Both desperately want a child, yet both are resigned to the reality that too much time has already passed to realize that cherished hope. When told that she would indeed bear a son, Sarah gives vent to her pent-up anger, disappointment and hope in a laugh. “Am I to have enjoyment–with my husband so old?”

In reporting her words to Abraham, God decides to modify her statement.  God understands that Abraham would be hurt by Sarah’s assertion that Abraham is too old to father a child.  So God tells Abraham that Sarah referred, instead, to her own age. “Shall I in truth bear a child, old as I am?”

God is willing to ignore questions of integrity in order to preserve Abraham’s dignity and the peace between husband and wife.

Rashi (medieval French commentator) notes that “Scripture altered her statement in the interests of peace.” Mip’nei darkhei shalom–for the sake of peace, we are instructed by Jewish wisdom to modify our statements.  Honesty, while precious, is not an ultimate value. Important as it is to tell the truth, honesty retains its preeminence because it helps human beings live together in peace.  On occasion, however, scrupulous honesty can damage a relationship and in that instance, it is more important to protect a person’s feelings, self-worth and love.

The Mishnah, an early rabbinic compilation of legal material, tells us that on her wedding day, a bride is to be told that she is beautiful, regardless of how she really looks.  Why?  Mip’nei darkhei shalom, for the sake of peace.

If serving the Lord does not lead to caring for the dignity of other human beings, does not lead to a willingness to ignore one’s own integrity to protect another’s feelings, then there is something lacking in our notion of what God wants.

According to the Torah, and according to rabbinic tradition, God cares about human caring. Honesty in the service of compassion and growth is a mitzvah, commandment, even if the truth is painful.  Honesty at the expense of another human’s feelings, simply to air one’s own viewpoint, is a betrayal of God.

The deaths of Abraham and Sarah. 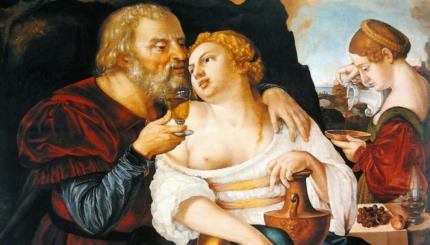