This week’s haftarah is set in the time of a brutal famine in Israel, while Jehoram son of Ahab was king of Israel. The scene opens with four lepers sitting outside the city limits, discussing their sad, hungry prospects.

The four lepers realize that they will soon starve to death if they take no action. They decide to defect from the Israelite camp and go to the camp of the Arameans, who had laid siege over the area. They explain that they have nothing to lose: “If they [the Arameans] let us live, we shall live; and if they put us to death, we shall but die” (7:4).

At twilight, they head for the Aramean camp. Much to their surprise, they discover that the camp was totally abandoned. God had created a miracle, causing the Arameans to hear sounds of chariots and horses, and flee their own camp in fear of attack.

The four lepers help themselves to all the Arameans had left behind: food, drink, silver, and gold. Then they realize they should share the wealth: “This is a day of good news, and we are keeping silent! Come, let us go and inform the king’s palace” (7:9).

The lepers return to the city and tell the gatekeepers about their discovery. The gatekeepers pass the news along and soon King Jehoram, receives the message. Yet he is skeptical, believing that the Arameans had left the camp as a trap, and would be waiting nearby, ready to ambush, as soon as the hungry Israelites entered the Aramean camp to look for food.

But one of the king’s courtiers–perhaps out of desperation in famine–encourages the king to investigate the situation further. The courtier proposes sending some horses ahead to see if the Arameans are really laying in ambush. The messengers on these horses discover that the lepers were in fact correct. The camp was fully deserted, and the road, all the way to the Jordan, was strewn with clothing and gear that the Arameans had thrown out in haste.

The people of Israel plundered the Aramean camp. The Israelite economy experienced an upturn, actualizing the prophecy which Elisha had delivered on the previous day: “This time tomorrow, a seah [a biblical measurement] of choice flour shall sell for a shekel at the gate of Samaria, and two seahs of barley for a shekel” (7:1, 7:18).

When Elisha had delivered this prophecy, the king’s aide had expressed disbelief, and even mocked Elisha: “Even if the Lord made windows in the sky, could this come to pass?” Elisha had responded harshly: “You shall see it with your own eyes, but you shall not eat of it” (7:2, 7:19).

Sure enough, the king appointed this aide to stand at the gate of the Aramean camp while the Israelites helped themselves to the loot. In their massive excitement, the crowd descended on the camp and trampled this aide to death.

Connection to the Parashah

The name of this week’s parashah, Metzora, means “leper.” The parashah describes the process for ritual cleansing after one is afflicted with leprosy–a skin disease which the Bible also considers a spiritual affliction, and therefore different from what we call leprosy today.

According to the Torah, lepers must separate from the community: “As for the person with a leprous affection, his clothes shall be rent, his head shall be left bare, and he shall cover over his upper lip, and he shall call out ‘Unclean! Unclean’…He shall dwell apart, his dwelling shall be outside the camp” (Leviticus 13:45-46).

In our haftarah, we see that even though lepers are separate from the community–indeed, the four lepers were at first situated outside the city gates–they can, and should, still feel communal responsibility. Instead of resenting their outsider status, the four lepers choose to share the news of the wealth they had found and were therefore instrumental in saving Israel from starvation.

Commonly mistranslated as leprosy, this ailment described in the Bible cannot be healed by doctors. 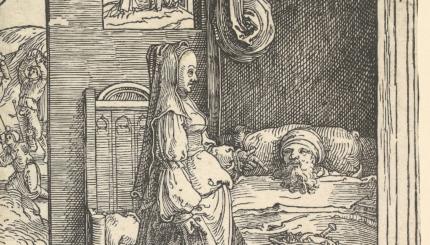