In slight anger, for a moment,
I hid My face from you;
But with kindness everlasting
I will take you back in love.
(Isaiah 54:8)

This heartfelt promise from God to Israel represents the overall message of reconciliation conveyed in this week’s haftarah. One of the seven Haftarot of consolation read between Tisha B’Av and Rosh Hashanah, this Haftarah conveys a powerful, comforting message in a small number of verses.

In the first three verses of the Haftarah, an exiled Israel is compared to a woman who has never experienced the pleasure of bearing a child. “Shout, O barren one!” (54:1), the Haftarah opens, instructing this metaphorical woman to cry out in joyful celebration because she will soon be blessed with children. She is told to enlarge the size of her tent to make room for all the children she will have.

In the middle section of the haftarah, verses 4 through 8, Isaiah describes how God will bring Israel back to Him in mercy. Earlier, Israel was a barren woman. Now, Israel is described as a widow who lost her husband (God), but she is promised that she will “remember no more the shame of your widowhood” (54:4). In the next verses she is described as a third kind of woman–one whose husband left her, forlorn and forsaken. She is promised that her husband (again, God) will take her back in love.

The last two verses of the Haftarah strengthen God’s message by comparing it to the covenant with Noah in the Book of Genesis. Back then, God promised that He would never again flood the earth; now He pledges never again to be angry with or rebuke Israel. Even if the mountains move and the hills are shaken, God’s covenant will stand firm. 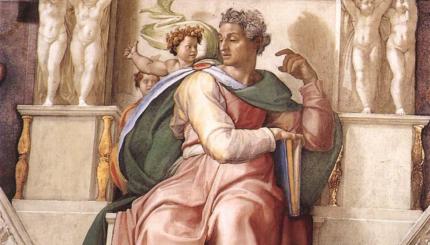 Today may be dark, but tomorrow, God's light will shine on His people.

Finally, some words of comfort for Jerusalem and its people.