Reading The Story of Creation on Simchat Torah

The Reform Machzor (holiday prayer book) contains this portion as an additional Rosh Hashanah Torah reading. Reform congregations that observe two days of Rosh Hashanah most often use it as the second day reading, though some congegations use it for the first day. The connection to the holiday is obvious. Tradition has it that Rosh Hashanah is the birthday of the world, which is also reflected in the liturgy, hence the reading of the story of creation. This English translation is reprinted with permission from Tanakh: The Holy Scriptures published by the Jewish Publication Society.

1:2.             the earth being unformed and void, with darkness over the surface of the deep and a wind from God sweeping over the water–

1:11.         And God said, "Let the earth sprout vegetation: seed-bearing plants, fruit trees of every kind on earth that bear fruit with the seed in it." And it was so.

1:12.         The earth brought forth vegetation: seed-bearing plants of every kind, and trees of every kind bearing fruit with the seed in it. And God saw that this was good.

1:14.         God said, "Let there be lights in the expanse of the sky to separate day from night; they shall serve as signs for the set times–the days and the years;

1:20.         God said, "Let the waters bring forth swarms of living creatures, and birds that fly above the earth across the expanse of the sky."

1:21.         God created the great sea monsters, and all the living creatures of every kind that creep, which the waters brought forth in swarms; and all the winged birds of every kind. And God saw that this was good.

1:25.         God made wild beasts of every kind and cattle of every kind, and all kinds of creeping things of the earth. And God saw that this was good.

1:26.         And God said, "Let us make man in our image, after our likeness. They shall rule the fish of the sea, the birds of the sky, the cattle, the whole earth, and all the creeping things that creep on earth."

1:28.         God blessed them and God said to them, "Be fertile and increase, fill the earth and master it; and rule the fish of the sea, the birds of the sky, and all the living things that creep on earth."

1:29.         God said, "See, I give you every seed-bearing plant that is upon all the earth, and every tree that has seed-bearing fruit; they shall be yours for food.

2:3.             And God blessed the seventh day and declared it holy, because on it God ceased from all the work of creation which He had done. 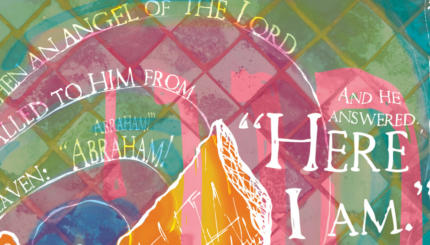 Lessons from the Torah

A Bible scholar takes issue with those who blame the Book of Genesis for Western culture's exploitative disregard for nature.