One year my mother put kimchee, a spicy, pickled cabbage condiment, on our seder plate. My Korean mother thought it was a reasonable substitution since both kimchee and horseradish elicit a similar sting in the mouth, the same clearing of the nostrils. She also liked kimchee on gefilte fish and matzah. “Kimchee just like maror, but better,” she said. I resigned myself to the fact that we were never going to be a “normal” Jewish family.

I grew up part of the “mixed multitude” of our people: an Ashkenazi, Reform Jewish father, a Korean Buddhist mother. I was born in Seoul and moved to Tacoma, Washington, at the age of five. Growing up, I knew my family was atypical, yet we were made to feel quite at home in our synagogue and community. My Jewish education began in my synagogue preschool, extended through cantorial and rabbinical school at Hebrew Union College (HUC), and continues today. I was the first Asian American to graduate from the rabbinical program at HUC, but definitely not the last — a Chinese American rabbi graduated the very next year, and I am sure others will follow.

As a child, I believed that my sister and I were the “only ones” in the Jewish community–the only ones with Asian faces, the only ones whose family trees didn’t have roots in Eastern Europe, the only ones with kimchee on the seder plate. But as I grew older, I began to see myself reflected in the Jewish community. I was the only multiracial Jew at my Jewish summer camp in 1985; when I was a song-leader a decade later, there were a dozen. I have met hundreds of people in multiracial Jewish families in the Northeast through the Multiracial Jewish Network. Social scientist Gary Tobin numbers interracial Jewish families in the hundreds of thousands in North America.

As I learned more about Jewish history and culture, I found it very powerful to learn that being of mixed race in the Jewish community was not just a modern phenomenon. We were a mixed multitude when we left Egypt and entered Israel, and the Hebrews continued to acquire different cultures and races throughout our Diaspora history. Walking through the streets of modern-day Israel, one sees the multicolored faces of Ethiopian, Russian, Yemenite, Iraqi, Moroccan, Polish, and countless other races of Jews — many facial particularities, but all Jewish. Yet, if you were to ask the typical secular Israeli on the street what it meant to be Jewish, she might respond, “It’s not religious so much, it’s my culture, my ethnicity.” If Judaism is about culture, what then does it mean to be Jewish when Jews come from so many different cultures and ethnic backgrounds?

As the child of a non-Jewish mother, a mother who carried her own distinct ethnic and cultural traditions, I came to believe that I could never be “fully Jewish” since I could never be “purely” Jewish. I was reminded of this daily: when fielding the many comments like, “Funny, you don’t look Jewish,” or having to answer questions on my halakhic (Jewish legal) status as a Jew. My internal questions of authenticity loomed over my Jewish identity throughout my adolescence into early adulthood, as I sought to integrate my Jewish, Korean, and secular American identities.

It was only in a period of crisis, one college summer while living in Israel, that I fully understood what my Jewish identity meant to me. After a painful summer of feeling marginalized and invisible in Israel, I called my mother to declare that I no longer wanted to be a Jew. I did not look Jewish, I did not carry a Jewish name, and I no longer wanted the heavy burden of having to explain and prove myself every time I entered a new Jewish community. She simply responded by saying, “Is that possible?” It was only at that moment that I realized I could no sooner stop being a Jew than I could stop being Korean, or female, or me. I decided then to have a giyur (conversion ceremony), what I termed a reaffirmation ceremony in which I dipped in the mikvah (ritual bath) and reaffirmed my Jewish legacy. I have come to understand that anyone who has seriously considered her Jewish identity struggles with the many competing identities that the name “Jew” signifies.

What does it mean to be a “normal” Jewish family today? As we learn each other’s stories we hear the challenges and joys of reconciling our sometimes competing identities of being Jewish while also feminist, Arab, gay, African-American, or Korean. We were a mixed multitude in ancient times, and we still are. May we continue to see the many faces of Israel as a gift that enriches our people.

Reprinted with permission from Sh’ma: A Journal of Jewish Responsibility (June 2003).

Lois Leveen’s newest novel, The Secrets of Mary Bowser, is now available. There’s a novel I first read years ago ... 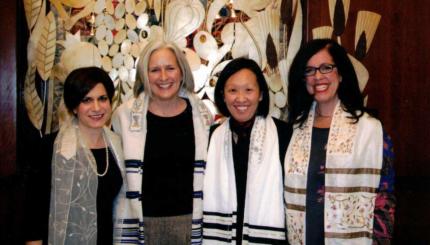