Reprinted with permission from The Encyclopedia of Hasidism, edited by Tzvi M. Rabinowicz (Jason Aronson).

From the time of the Besht [Yisrael Ba’al Shem Tov, the founder of Hasidism in the late 18th century], the love of friends and the close attachment of friends marked the Hasidic shtieblech [synagogues and study halls]. Hasidism stressed the marvelous friendship that united David and Jonathan in a spontaneous effluence that endured to death (2 Samuel 1:25).

The reason the movement thrived and expanded so rapidly was due, in a large measure, to its emphasis on developing close personal ties among its followers. New hasidim were welcomed with open arms. They came to feel that they were part of one family. They could enter the homes of other hasidim as “brothers.” They could share the most intimate concerns with older hasidim, who would serve as their “big brothers.” They could confess their innermost secrets to the rebbe [the charismatic leader of a hasidic group].

This theme permeates hasidic literature. The Besht, commenting on the verse “The Lord is your shade” (Psalm 121:5) stated, “As you conduct yourselves toward others, so does the Lord conduct Himself toward you. If you are kind and merciful, the Lord will be kind and merciful toward you.” Similarly, Rabbi Simhah Bunem of Przysucha [a Hasidic rabbi in Poland during the late 18th and early 19th centuries] advised all hasidim to endeavor to gain a true friend to whom they could unburden their heart and disclose even their transgressions.

Rabbi Nahman of Bratzlav [a prominent Hasidic rabbi in Podolia and the Ukraine, also in the late 18th and early 19th centuries] maintained that where there is no love among people, there are slander, mockery, and false accusation.

When the “Holy Jew” of Przysucha [teacher and predecessor of Rabbi Simhah Bunem as tzaddik of Przysucha] was one asked, “How does the commandment ‘Love thy neighbor as yourself’ (Leviticus 19:18) harmonize with the command to ‘love one’s rabbi more than any other man,'” he replied, “The verse teaches us to love our fellowmen in the same degree as we love ourselves. But as a person loves the head more than the other limbs, so may one love one’s rabbi more than any other person.”

At the same time, the hasidim would tend to withdraw from any association with those who did not belong to their particular sect. The hasidim favored their own–at the expense of other Jews–acting at times as if the non-hasidim had no claim at all on their generosity and fellow feelings. Rabbi Shneur Zalman [of Lyadi (1745-1813), founder of Chabad Hasidism], however, called upon his followers to love all Jews. 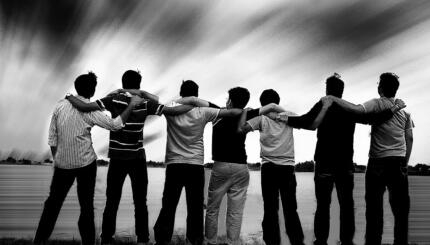 The benefits of friendship are appreciated by Jewish tradition: Ecclesiastes wrote, "Two are better than one because they have a good reward for their labor. For if they fall, the one will lift up his fellow; but woe to him that is alone when he falls, fo