Reprinted with permission from A Book of Life (Schocken Books).

The rabbis created the basic liturgical formula of the berakhah, the “blessing,” from the Great Assembly [the sages of post-biblical antiquity, before the Rabbis of the Mishnah and Talmud]. Its standard wording is: Barukh atah Adonai eloheinu melekh ha-olam…, “Praised are You, Eternal our God, source of the universe…,” followed by a specific attribute, “who created the fruit of trees” or “who brought forth bread from the earth.”

There are many specific berakhot, but they all begin with this formula. A berakhah is to be said before partaking of food. There are berakhot for fruit, vegetables, bread, cake, wine, and a catch-all formulation for everything else. Saying a berakhah is meant to bring us to awareness. For the rabbis, the first level is an awareness of God.

“Our rabbis have taught: It is forbidden for a person to enjoy anything of this world without a berakhah…. Rabbi Levi contrasted two texts. It is written, ‘The earth is the Lord’s and the fullness thereof” (Psalm 24:1), and it is also written, ‘The heavens are the heavens of God, but the earth God has given to human beings!” (Psalm 115:16). There is no contradiction: In the one case it is before a blessing has been said, in the other case after” (Babylonian Talmud, Berakhot 35a).

The rabbis begin with a notion that God as creator has made this world and all that it contains. Whoever eats without saying a blessing is like someone who robs from the Holy One. This notion conveys an important statement about God and humans. Despite all our strivings, our sustenance is only partly the result of our own endeavor. Ultimately everything comes from God. We are little more than tenant farmers on this planet. Our spiritual awareness begins when we sense that we have received this gift from the Creator or all life.

The berakhah before eating brings us another awareness, too. The act of eating is meant to be one of pleasure and enjoyment. We should savor our food rather than just devour it.

The Baal Shem Tov (the 18th-century founder of Hasidism) taught: “When you eat and take pleasure in the taste and sweetness of the food, bear in mind that it is God who has placed into the food its taste and sweetness. You will, then, truly serve God by your eating.” On this level, we should make ourselves aware of the pleasurable nature of eating.

We should likewise be aware of food as a necessary source of health and sustenance. Without food we could not live–this is a fact that we may easily take for granted. The Rebbe of Mikolayeve taught: “Eat and drink because you are commanded to safeguard your health, as it is said, ‘For your own sake, therefore be most careful’ (Deuteronomy 4:15). Such eating is a pious deed. But to eat merely to satisfy a craving is a form of transgression” (Louis Newman, Hasidic Anthology, p. 86).

This also brings to awareness the fact that there are many people in this world who cannot take their next meal for granted. They suffer not a lack of awareness, only a lack of food. In the past, the tradition encouraged us to share our meals with the poor. In an immediate sense, this is not often practical today. We could, however, accept the suggestion of [Rabbi Meir Simha Ha-Kohen of Dvinsk (1843-1926)]: “In a place where poor people are not to be found, what can a person do…? It is possible to say that you should estimate what the cost of the meal for a poor person would have been, and put that amount aside for charity before you eat” (Sha’ar Ha-kedushah 15:64).

All in all, the spiritual awareness of the meaning of food that is contained in the berakhah enables us nourish our souls as we nourish our bodies.

“The essential advice on how to deal with food lust is that when you eat you should be aware of what you are doing; then it ceases to be just an animal action. The lust for food is intact if you allow your mind and all your senses to be immersed in eating until you forget what you are doing. Then eating is like an animal’s action.” (Emunat Tzadikim, p. 78)

Eating is intended to be a purposeful act. While animals eat out of instinct, we eat out of awareness of all that the act of eating entails. We are to remember all that brought this food to the plate.

The Jerusalem Talmud (Hallah 1) says: “Before you eat your piece of bread, remember that 10 mitzvot [commandments] have been performed in preparing it for your consumption: it was not sown on Shabbat or the Sabbatical year; it was not plowed then either; the ox’s mouth was not tied while he worked in the field; the grower has not gathered the left-over and forgotten sheaves [but has instead left them for the poor]; he has not reaped the corners of his fields [for the same reason]; he has given the tithes to the priest and Levite; he has given the second tithe and the tithe to the poor; and his wife separated a piece of dough for the priest.”

Eating as a Holy Act: A Hasidic Perspective

That sense of being part of the universe rather than apart from it leads t one final level of awareness.

The Ba’al Shem Tov taught: “When you take a fruit of any other food in your hand and recite the blessing ‘Praised are You, O God’ with intention, your mentioning the holy name awakens the spark of divine life by which the fruit was originally created. Everything was created by the power of the holy name. Since an element is awakened when it comes into contact with a similar element, the blessing awakens the element of divine life in the fruit, the element that is the food of the soul. This applies to all the permitted and kosher foods, since God commanded us to uplift them from a material existence to a spiritual existence” (Keter Shem Tov, p. 43).

“The will of the Creator, then, is to ‘enliven every living thing’ by means of eating. So I have to eat in holiness and purity, for I am doing God’s will by eating. And when you think this way, then you can accomplish the spiritual purpose of eating by lifting up the holy sparks to their source…. And you should realize that it is God who has brought you to this hunger and thirst. For the hunger is from God” (Mazkeret Shem Ha-gedolim, p. 79).

If sparks of holiness are found everywhere in the world and we are to work toward restoring the wholeness of the divine, then the act of eating becomes in and of itself a holy act. By eating with this level of consciousness we are helping in the process of tikkun, “repairing” the world. We can transform hunger and thirst into a hunger and thirst for the experience of the holy. 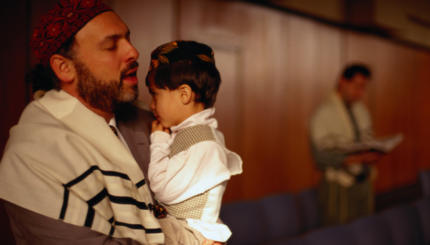 How to achieve that extra measure of soulfulness that marks the Sabbath.

By blessing after we eat, we elevate the act of eating by connecting with God.

The Spirituality of Caring for Our Bodies

We may need to work on our spiritual health in order to ensure our physical health.