The first woman, described in the biblical creation story in Genesis 2-3, Eve is perhaps the best-known female figure in the Hebrew Bible. Her prominence comes not only from her role in the Garden of Eden story itself, but also from her frequent appearance in Western art, theology, and literature.

Indeed, the image of Eve, who never appears in the Hebrew Bible after the opening chapters of Genesis, may be more strongly colored by post-biblical culture than by the biblical narrative itself. For many, Eve represents sin, seduction and the secondary nature of woman. Because such aspects of her character are not actually part of the Hebrew narrative of Genesis, but have become associated with her through Jewish and Christian interpretive traditions, a discussion of Eve means first pointing out some of those views that are not intrinsic to the ancient Hebrew tale.

Did She or Didn’t She Sin?

Although Eve is linked with the beginnings of sin in the earliest mentions of her outside the Hebrew Bible–in the Jewish non-canonical Book of Sirach, as well as in the New Testament and in other early Jewish and Christian works–she is not called a sinner in the Genesis 2-3 account.

To be sure, she and Adam disobey God; but the word sin does not appear in the Hebrew Bible until the Cain-Abel narrative, where it explicitly refers to the ultimate social crime, fratricide. Another misconception is that Eve tempts or seduces Adam. In reality she merely takes a piece of fruit–not an apple–and hands it to him; they both had been told not to eat of it, yet they both do.

Also, the story is often thought to involve God’s cursing of Eve (and Adam), yet the text speaks only of cursing the serpent and the ground. And the Eden tale is frequently referred to as the “Fall” or “Fall of Man,” although there is no fall in the narrative; that designation is a later Christian application of Plato’s idea (in the Phaedrus) of the fall of heavenly beings to earth in order to express the idea of departure from divine favor or grace.

Such views are entrenched in Western notions of Eden, making it difficult to see features of Eve and her role that form part of the Hebrew tale. These features have been largely unnoticed or ignored by the interpretive tradition. This situation, and also the way in which the Genesis 2-3 story appears to sanction patriarchal notions of male dominance, has made a reconsideration of the Eden tale an important project of feminist biblical study ever since the first wave of feminist interest in biblical exegesis, which was part of the nineteenth-century suffrage movement in the United States.

Contemporary feminist biblical study for the most part, but not entirely, has tended to remove negative theological overlay, to recapture positive aspects of Eve’s role, and generally to understand how this famous beginnings account might have functioned in Israelite culture. The literature dealing with Eve and her story is voluminous, and only a sample of the new perspectives can be discussed here.

And God Made Humans

The well-known Eden tale begins with the scene of a well-watered garden–so unlike the frequently drought-stricken highlands of the land of Canaan in which the Israelites lived. God has placed there an adam, a person formed from the “dust of the ground [adama]” (2:7). This wordplay evokes the notion of human beings as earth creatures.

The traditional translation of adam as “man” at the beginning of the Eden story can be contested. The Hebrew word adam can indeed mean a male and even be the proper name Adam; but it can also be a generic term for a mortal, or a human being. Such may be the case here, according to some current feminist readings of biblical inclusive language as well as some medieval Jewish commentaries, thus implying that the original human was androgynous and that God had to divide it into two gendered beings in order for procreation and continued human life to begin.

God tells this first being that anything in the garden may be eaten except for the fruit of a certain tree. God then decides that this person should not be alone and tries animals as companions. Creating animals serves to populate the world with living creatures but doesn’t quite meet God’s intentions.

God then performs cosmic surgery on the first per-son, removing one “side” to form a second person. The essential unity of these first two humans is expressed in the well-known words (Gen 2:23) “bone of my bones / and flesh of my flesh,” which the “Man” (Hebrew ish) says to the “Woman” (Hebrew isha).

This unity is reenacted in copulation, indicating the strength of the marital bond over the natal one: “Therefore a man leaves his father and his mother and clings to his wife, and they become one flesh” (2:24). The relationship between this first pair of humans is also expressed by the term ezer ke-negdo, translated “helper as his partner” by the NRSV and “helpmeet” or “help-mate” in older English versions (2:18). This unusual phrase probably indicates mutuality. The noun helper can mean either “an assistant” (subordinate) or “an expert” (superior); but the modifying prepositional phrase, used only here in the Bible, apparently means “equal to.” The phrase, which might be translated literally as “an equal helper,” indicates that no hierarchical relationship exists between the primordial pair.

The serpent now enters the scene. An intelligent being, it begins a dialogue with the woman, who is thus the first human to engage in conversation (a reflection perhaps of female skill with words?). The woman is the one who appreciates the aesthetic and nutritional qualities of the forbidden tree and its fruit, as well as its potential “to make one wise” (3:6). The woman and the man both eat and ultimately are expelled from Eden for their misdeed, lest they eat of the tree of life and gain immortality along with their wisdom. Eating of the forbidden fruit has made them like God, able to know, perceive, and understand “good and bad” (3:22)–meaning everything. But they must never eat of the life tree and gain immortality too.

The riveting and controversial story of human origins can best be understood as portraying archetypal human qualities, whereby the first humans represent all humans. The woman’s name is Eve, which apparently is derived from a root meaning “to live.” The introduction of her name is followed by a folk etymology; she is “mother of all living” (3:20). Her name is rich in symbolism, characterizing her archetypal role–as the first woman, Eve represents the essential life-giving maternal function of all women.

Eve is also the one who provides the first morsel of food, in a narrative in which the words for “food” and “eat” appear repeatedly. The repetition of such words in the story of human origins reflects the Israelite concern with sustenance in the difficult environment of the Canaanite highlands. Eve’s action in handing the man some fruit may thus derive from the reality of women’s roles in food preparation rather than from a depiction of temptation or seduction.

What About the Women?

The Eden story also serves etiological purposes. It helped ancient Israelites deal with the harsh realities of daily existence, especially in contrast with life in the more fertile and better watered areas of the ancient Near East, by providing an “explanation” for their difficult life conditions. The punitive statements addressed to the first couple prior to the expulsion from the garden depict the realities they will face. Men (Gen 3:17-19) will experience unending toil in order to grow crops from ground that is “cursed.” And women?

This brings us to perhaps the most difficult verse in the Hebrew Bible for people concerned with human equality. Gen 3:16 seems to give men the right to dominate women. Feminists have grappled with this text in a variety of ways. One possibility is to recognize that the traditional translations have distorted its meaning and that it is best read against its social background of agrarian life.

Instead of the familiar “I will greatly increase your pangs in childbearing,” the verse should begin “I will greatly increase your work and your pregnancies.” The word for “work,” izavon, is the same word used in God’s statement to the man; the usual translation (“pangs” or “pain”) is far less accurate. In addition, the woman will experience more pregnancies; the Hebrew word is pregnancy, not childbearing, as the NRSV and other versions have it. Women, in other words, must have large families and also work hard, which is what the next clause also proclaims. The verse is a mandate for intense productive and reproductive roles for women; it sanctions what life meant for Israelite women.

In light of this, the notion of general male dominance in the second half of the verse is a distortion. More likely, the idea of male “rule” is related to the multiple pregnancies mentioned in the first half of the verse. Women might resist repeated pregnancies because of the dangers of death in childbirth, but because of their sexual passion (“desire,” 3:16) they accede to their husbands’ sexuality. Male rule in this verse is narrowly drawn, relating only to sexuality; male interpretive traditions have extended that idea by claiming that it means general male dominance.

Eve does not disappear from the biblical story at the expulsion from the garden. In a little-noticed introduction (4:1-2a) to the ensuing Cain and Abel narrative, Eve is said to have “created a man together with the Lord.” The NRSV translation–“produced a man with the help of the Lord”–obscures highly unusual language. The word for “create” is the same as the word used in the Bible for the creative power of God (Gen 14:19, 22) and in extrabiblical texts for the creativity of Semitic mother goddesses.

Women in the Bible are said to “bear children,” not “create a man”; and creating a man “with” God puts female creative power alongside that of God. This view of the woman as the source of life, together with the more conventional notice of the birth of her second son, Abel (Gen 4:2a), is the last direct reference to Eve in the Hebrew Bible (although she is mentioned indirectly in Gen 4:25, where she gives birth to Seth). It follows the scene in which Adam names her, presumably signifying his power over her. Is that a male narrator’s attempt to compensate for the awesomeness of female creativity, akin to God’s? 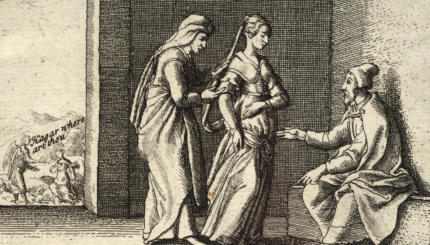