Immigration to Israel changed Ethiopian Jewish family life radically. In Israel, girls are not allowed to marry at first menstruation and women are encouraged to go out to work. Some young women have become leaders; others have acquired higher education, and are high-profile career women. As the gap between migrant Ethiopian women and men continues to grow, new forms of gender roles and family structure are emerging.

There was no mass emigration from Ethiopia by the Beta Israel after the establishment of the State of Israel in 1948, as there was with other Jewish communities. In 1952 and 1956, Emperor Haile Selassie allowed two groups of young Beta Israel pupils to study in a dormitory school, Kfar Batya, in Israel, on the condition that they return. A few of the pupils were female and two women stayed on in Israel after marrying Israeli men.

In 1973, on the basis of the halakhic precedent by David ben Solomon ibn Zimr, (1479-1573), also known as the Radbaz, that the “Falasha” (sic) are members of the lost tribe of Dan, Sephardi Chief Rabbi of Israel Ovadiah Yosef declared that they could be accepted as lost Israelites and thereby return to their historic homeland. In 1975, the Ashkenazi Chief Rabbi Shlomo Goren also accepted the Ethiopian Jews into the fold.

In 1984–5, 7,700 Ethiopian Jews were airlifted from the Sudan to Israel in Operation Moses, and in 1991 14,400 were airlifted in 24 hours from Addis Ababa to Israel in Operation Solomon. Some women gave birth on the flight itself. During the 1990s, thousands of people belonging to the group today called the Feresmura or Felesmura (Jews who had converted to Christianity from the nineteenth century on) migrated to Israel. At the end of 2017, the population of Ethiopian origin in Israel numbered 148,700 residents. Approximately 87,000 were born in Ethiopia, and 61,700 were Israeli-born with fathers born in Ethiopia.

One of the greatest changes the Ethiopian Jewish community has undergone in Israel in their move from an underdeveloped society to a modern, Western society is in the realm of family and personal relations. Female genital surgery is hardly ever performed in Israel and women express no desire to continue this practice; today it has died out. Girls can no longer marry at first puberty; it is illegal to marry in Israel before the age of seventeen. In addition, girls have to attend school until the minimum age of sixteen. According to the Israeli Central Bureau of Statistics (2018), Ethiopian Jews in practice marry at a later age than the overall Jewish population, although it is possible the state is unaware of earlier marriages. Endogamy is the norm; 88% of individuals (92% of men and 85% of women) of Ethiopian origin marry partners from their community.

Married women are encouraged by social workers and others to go out to work in order to assist with the family income, and it is often easier for women to find employment than men, particularly in the temporary, unskilled jobs in which Ethiopian Jews tend to congregate, despite the numerous vocational courses offered to the community. For the first time, rural Beta Israel handle money and manage bank accounts for the first time; a woman’s salary may be paid straight into her bank account; or she may be earning more than her husband.

Between 1995 and 2007, the number of femicides (wife-murders) among Ethiopian immigrants in Israel was 21 times higher than among non-Ethiopian Israelis. A small sample of Ethiopian women survivors of femicide attacks all related similar stories. They were born in small Ethiopian rural villages; they were forced to marry their husbands or were abducted by them; they suffered severe domestic violence, both in Ethiopia and after their emigration, of which social workers and kin in Israel appeared to be unaware. In all cases, the husband suspected that his wife was unfaithful to him and attempted to kill her in the domestic arena with a knife, in the apartment in which their children were present.

Today, the rate of femicide among the Ethiopian population in Israel is declining. The vast majority of young women in Israel of Ethiopian origin, whether married or divorced, model themselves on their Israeli female counterparts and pay at least lip-service to gender equality, even in the domestic arena.

Since their immigration to Israel, both males and females attend school. Whereas between 1987 and 1989, nearly ten percent of girls of Ethiopian origin of high-school age were not studying at any educational institution, probably because they were already mothers, today nearly every female adolescent is enrolled in school. However, some young Ethiopian female adolescents, like male youth, drop out of school, albeit at a slower rate.

At the other extreme, some women are among the forerunners of those receiving higher education in Israel. There are Ethiopian-Israeli women who hold doctorates; other women have completed their MAs in law, social work, social sciences, or physiotherapy. In the Hebrew University Program for Excellence in Education among Ethiopian Jews, which trained young Ethiopian Jews as teachers, just over half the students were female.

Occupations and Status in Israel

Among employed Israelis of Ethiopian origin who moved to Israel after the age of 12, about 50% of women work as cleaners. However, for Ethiopian Israelis with an academic degree, rates of labor market integration into occupations that demand highly skilled workers are similar to the general Jewish population. More females gain academic degrees than males, and therefore Ethiopian Jewish women in Israel are in general more successful than their male counterparts. Gaps between female Ethiopian Israeli students and other Jewish female students still exist, but they are much smaller than the gaps between male students.

In 2016, two Ethiopian-Israeli women were appointed to be judges: Ednaki Sebhat Haimowitz and Esther Tafta Gardi. Tsega Melaku is a well-known Israeli journalist. Pnina Tamano-Shata is the first Ethiopian woman in Israel to become a Member of Knesset. Meski Shibru-Sivan and Esther Rada are famous Ethiopian Jewish actresses and singers. Hadas Maladi-Mitzri was the first lieutenant in the Israel Defense Forces. Titi Aynaw made history in 2013 when she won the Miss Israel prize. 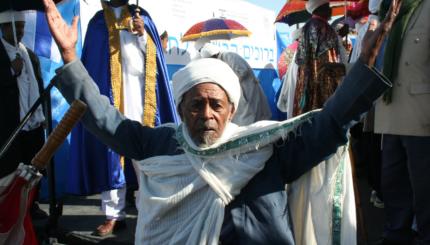