Eliezer of Damascus was the steward of Abraham’s house and his presumed heir, before the birth of Isaac. When Abraham saw that his son Isaac was already forty years old and still unmarried, he decided that the time had come to find a bride for his son. He sent his trusted servant Eliezer to his relatives in Haran, Mesopotamia, with instructions to bring back a bride for Isaac, because he didn’t want his son to marry any of the local Canaanite girls.

Eliezer took with him ten loaded camels and set out for the city of Nahor. On his arrival he made the camels kneel down by the well outside the city, and said to himself:

"O Lord, God of my master Abraham, grant me good fortune this day, and deal graciously with my master Abraham: Here I stand by the spring as the daughters of the townsmen come out to draw water; let the maiden to whom I say, ‘Please, lower your jar that I may drink,’ and who replies, ‘Drink, and I will also water your camels’–let her be the one whom You have decreed for Your servant Isaac. Thereby shall I know that You have dealt graciously with my master (Genesis 24:12–14)."

He had scarcely finished speaking his thoughts aloud when Rebekah came carrying a jar on her shoulder. She descended to the spring, filled her jar, and climbed back up. Eliezer ran to her and asked her if he could drink a little water from her jar. "Drink, my lord," she said (Genesis 24:18).

After he drank, she said, "I will also draw for your camels, until they finish drinking (Genesis 24:19)." Eliezer gazed at her silently while she gave water to the camels. He then gave her a gold earring and two gold bracelets and asked her (Genesis 24:23): "Pray tell me, whose daughter are you? Is there room in your father’s house for us to spend the night?" She replied, "I am the daughter of Bethuel the son of Milcah, whom she bore to Nahor. There is plenty of straw and feed at home, and also room to spend the night (Genesis 24:24–25)."

The man bowed low and blessed the Lord for having guided him to the house of his master’s kinsmen. Rebekah ran to her mother’s house and told her relatives what had happened. Her brother Laban saw the earring and the bracelets on his sister’s hands and ran to the well to invite the man to come to the house.

Eliezer entered the house while his camels were unloaded and given straw. Water was brought to bathe Eliezer’s feet and the feet of the men that came with him.

Food was set before him, but he refused to eat until he told them that Abraham had send him to find a bride for his son and heir and how he had realized that Rebekah was the intended one. Laban and Bethuel answered, "The matter was decreed by the Lord; we cannot speak to you bad or good. Here is Rebekah before you; take her and go and let her be a wife to your master’s son, as the Lord has spoken (Genesis 24:50–51)."

Eliezer, hearing these words, bowed low to the ground before God. Then he took out more silver and gold objects and clothing and gave them to Rebekah. He also gave presents to Laban and to his mother. After this he and his men ate and drank, and they rested in the night. Early next morning, they announced that they wanted to depart. Rebekah’s mother and Laban asked Eliezer if Rebekah could stay with them for another ten days.

"Do not delay me, now that the Lord has made my errand successful. Give me leave that I may go to my master," answered Eliezer (Genesis 24:56). They called Rebekah and said to her, "Will you go with this man?" Rebekah answered, "I will (Genesis 24:58)." Then she, her nurse Deborah, and her maids arose; mounted the camels; and followed Eliezer, while her relatives blessed her. 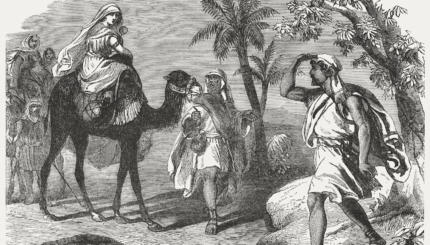