The Ashkenazi  Diaspora gradually spread westward and southward. During the Thirty Years’ War (1618‑1648), Germany began to readmit Jews, who supplied the armies. By the eighteenth century, the numerous German courts offered opportunities to financiers and “court Jews”—as those who served as financial advisers and agents to rulers in Europe were known—some of whom became extremely wealthy and powerful. The old Jewish communities in the lands that were to become Romania, Hungary, and Czechoslovakia grew large with Jews from the annexed Polish territories and immigrants from Poland and Russia.

In the nineteenth century, the Jews of Europe achieved emancipation. The process had begun when Napoleon’s revolutionary armies carried their ideals of the Rights of Man and equality into the countries they conquered, ending the age of the ghetto. The spirit of Enlightenment spread through a Europe that was shedding feudalism and industrializing and helped all the Jewish communities to achieve economic and social integration. Jews flocked to large cities like Prague, Budapest, Vienna, and Bucharest.

A small minority attained wealth and prominence in banking and commerce, the liberal professions, and various industries, but the majority who flooded in from Russia and Poland remained a poor, uprooted working class. While Jews in the villages remained steeped in religious orthodoxy and tradition, speaking Yiddish—their Polish roots much in evidence—the Haskalah (Hebrew for “Enlightenment”) spread modernization, acculturation, and integration in the cities. Although there was a certain replication of Polish Jewish culture, there was also a gradual assimilation of the varied local and ruling cultures (the lands were part of the German, Russian, and Austro‑Hungarian empires and were ethnically diverse). Several essentially different Jewish communities developed. Hungarian became the language of the Jewish elite, German that of the business communities, and Czech, Romanian, and other languages were spoken regionally.

For the wealthy city elites who integrated the new European societies, the hold of the past and of tradition loosened. Many turned their back on their Jewish heritage and opened themselves to the new experiences of the modern, non‑Jewish world. It was through this mid­dle‑class society who lived well that many of the more refined dishes entered the Jewish repertoire. At that time, the term fressfroemingkeit, or “culinary Jew,” was used to describe assimilated Jews whose devoutness found expression only in eating traditional dishes on Jewish holidays.

The glittering epoch in East Central Europe left a rich culinary heritage with the Jews, especially those of the dual Austro‑Hungarian monarchy. There, a rich and refined cosmopolitan cuisine, which was shared by the two countries, evolved through Viennese, French, Ottoman, and Magyar influences. (Viennese court food was Austro‑French, and Hungary had been ruled by the Ottoman Turks.) A magnificent range of pastries and luscious flourless tortes, which you can see in Jewish patisseries around the world, is part of that grand tradition.

Peasant food was also part of the heritage. It is represented most remarkably by the incredible variety of dumplings, often interchangeably served sweet or savory, that are still part of the peasant diet in all of Central Europe.

The German, Austrian, and Czech legacy includes goose, cured meats, sausages, and salamis, sauerkraut, sweet and savory dumplings, potato salads, and a general passion for the potato. Veal schnitzel and the jam-filled doughnuts that have become the ritual foods of Hanukah are from Vienna. Goulash, the famous paprika stew, and chicken paprikash were adopted in Hungary, as were cherry soups, blintzes (stuffed pancakes), and strudel. The paper-thin strudel dough was a legacy of the Turks, as were Hungarian stuffed peppers and tomatoes, which had never been accepted before in the Ashkenazi world. It seems that Jews had been afraid that tomatoes might not be kosher: The red juice looked like blood, which is forbidden. In Hungary the Jews learned to cook with wine, garlic and onion, and herbs and spices, and to put paprika, the sweetish red pepper powder, in almost everything. The cooking of Romania and the Balkans, which had much more in common with Turkey, brought grilled meats, roasted peppers, and eggplant puree, as well as the cornmeal mush known as mamaliga and the lavish use of yogurt and garlic.

When the Jews left in great waves for America and elsewhere to avoid conscription, escape pogroms, and earn a living, and later to flee Nazism, they took with them the old cooking traditions of their various regions of origin. The foods that recall the old communities have been passed on from one generation of immigrants to another, in every corner of the world. It seems, sometimes, as if martyrdom and nostalgia have invested them with almost holy qualities. 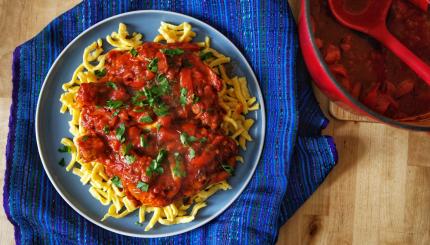 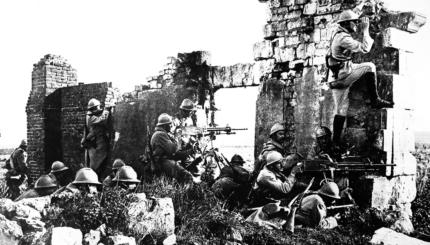 The Great War had a profound impact on world Jewry.