Imagine yourself sitting in the audience at an avant-garde performance in a foreign language. Onstage is a main performer, reciting quickly in a repetitive sing-song. He is surrounded by others who occasion­ally interrupt with brief interjections. You have been provided with a translation, but not understanding the language of perfor­mance, you have no way of judging precisely where your attention should be directed at any given moment. Chances are, you are tempted to walk out and never come back.

This is the experience of most Ameri­can Jews during the Shabbat morning Torah service. There are many reasons for the situation just described, some of them obvious: few American Jews understand Hebrew, few have adequate Jewish educations, few conduct their lives according to the precepts first suggested in the Torah, and so forth. But such expla­nations (however true they might be) are just excuses for not acting to improve matters.

If we want to bring Jews back to the synagogue, to educate them and increase their commitment to Jewish religious expressions, we must recognize what has been demanded of them, and how intoler­able it is. True, there is value to tradition on its own terms, and the Torah service as we know it does reenact, as best it can, a tradition of many centuries. But, as presently conducted, it no longer speaks meaningfully. It is not feasible, therefore, to maintain this practice without modifica­tion. Jewish tradition does not demand that Jews suffer through ritual that offers little, if any, edification.

The Power of Performance

Ours are not the first generations that have had little comprehension of biblical Hebrew. Most Jews in the first centuries of the common era, in the Land of Israel as well as in the Diaspora, spoke Ara­maic, some spoke Greek, and only a few spoke/understood Hebrew. How did religious leaders of that age respond to Hebrew illiteracy? They made oral translation a regular part of the Shabbat morning Torah reading.

According to the record of the Mishnah (the first document of Rabbinic law) and other early rabbinic sources (Mishnah Megillah 4:4, Tosefta Megillah 3:20), the Torah reader would read a single verse, followed immediately by a translation into the vernacular. Hebrew, translation, Hebrew, translation–thus the reading would proceed until the weekly portion, far smaller than our weekly portions, would be completed. It was impossible for those present in the synagogue not to understand what was being read.

It may be asked, what essential difference is there between this practice and ours? After all, ancient custom was necessitated by the limits of their technology. Without printing presses and therefore without books, this was the only way that translation of the Hebrew original could be provided. We, on the other hand, can handle Hebrew illiteracy far more efficiently. With humashim [printed Bibles], we have no need for the Mishnah’s cumbersome procedure. Isn’t our efficiency preferable?

When we think in terms of efficiency, we miss a more basic point. It is true that we can provide translation in a book, but the procedure described above is far more than translation. It is public ritual performance. By “perfor­mance” I mean two things. First, all ritual by virtue of being performed or enacted is a performance. But ritual is also drama. By enacting a ritual, we symbolically dramatize a set of meanings. Such performance is simultaneously ritual, drama, communication, and instruction.

Needless to say, a printed translation, lying inert on the surface of a page, is incapable of replicating performance of this kind. The transformation of public ritual perfor­mance into private book-reading has, therefore, important consequences. These are well described in a cultural history of Shakespeare, Reinventing Shakespeare, by Gary Taylor of Brandeis University. Taylor details the effects on the audience/reader of making Shakespeare’s plays into books:

Shakespeare’s plays had been, throughout the 17th century, actions. They happened; they enacted a story temporally; they were acted out by particular persons from beginning to end; they acted upon an audience assembled in a certain place at a certain time. In the 18th century, they became things, they became, primarily, books. Books are spatial, not temporal; any reader can skip backward or forward, dip in, pull out, pause, repeat. Books can be cut up and rearranged, as time cannot. The transformation of Shakespeare’s actions into books thus permitted and encouraged their disintegration into assemblages of quotable fragments… Undertext of commentary repeatedly interrupts the reading of the uppertext… The experience of reading Hamlet in the late 18th century was an experience of directed action repeatedly interrupted, postponed by eddies of subsidiary meditation. Books abstract, impersonalize, idealize; what had been an interaction between a cast and an audience became a kind of message left by an unreachable author for any and all possible readers. The text became a thing….

Disintegration, interruption, abstraction, impersonal­ization, an unreachable author–these words describe what happens to a dramatic performance when it is made into a book with commentary; these words also describe the experience of reading the humash. The books on our laps create a gulf between our experience and the dramatic performance on the bima. What might be alive–a voice with presence and spirit–is reduced to print on paper, brought to life only in the mind of the individual.

In contrast, the ancient practice kept the performance aspect of the ritual alive, thus assuring genuine communi­cation and instruction. Near-simultaneous verbal translation created a live connection between the reader and the audience. The reader acted as witness to the word of God. The congregation listened and understood as a community. The Torah’s message was not merely recited as past history; it was present and alive. Its immediacy was such that the teacher of the day had to respect the community’s own hearing of the text. The ceremony as a whole yielded genuine learning and communal involve­ment.

The connection between performance/drama and true instruction cannot be underestimated. Effective education requires that the message conveyed in a way that com­mands the student’s attention and interest. One of the most effective means of doing so is through live presentation. For this reason, it is generally easier to learn from a good teacher than from an academic article, and from a professor who speaks spontaneously than from one who reads lecture notes.

But, you might ask, isn’t Torah reading just that-­-reading from a text (closer to reading lecture notes than to spontaneous performance)? Bible scholars have long recognized that the biblical text (including the Torah) preserves significant aspects of the original oral forms of the stories it contains. And for good reason! In ancient societies, it was difficult to produce books (or scrolls) in large numbers, and books were therefore quite precious and rare. By necessity, for most people book reading was oral and public, and written texts continued to be characterized by common oral features. (One scholar calls this the “oral residue”). More accurately, then, Torah reading was closer to dramatic reading from a script, where the words and form are intended for oral presenta­tion.

Bringing the Text to Life

I first appreciated the difference between reading and listening to the Torah portion when I had my first child. With baby in arm, it was impossible to follow the reading in a humash, soI began simply to listen. (I am fortunate to be able to understand the Hebrew without translation). And what a difference it made! I no longer felt that I was fulfilling an assignment–to follow the reader word for word in the printed text. More important, I was no longer distracted by the commentary or by interesting pieces of text, earlier or later, that diverted my attention from the words then being spoken. Instead, I could experience the story or teaching as it was related to me personally and directly. There was something immediate and fresh, ­something I had not felt when I was reading the text. In fact, I could often imagine the reader as one in a chain of lawgivers or storytellers. The teaching he/she now repeated to me had been related to him/her by an elder, who had learned it from a prior elder, and so forth. Before me stood a living participant in the ancient chain of tradition and, as the next listener, I too now stood in that chain.

To improve upon the present condition, we must begin to experiment with alternatives. Some congregations might want to close their humashim andtry literally to recreate the classical practice by following each verse in the Hebrew with a public, verbal translation in English. If this method is too foreign, or too disruptive, a congregation might instead experiment with reading an aliyah in English once in a while, with appropriate chanting. Or, for a more radical change, it might be possible to offer a dramatic presentation of some of the stories in Genesis, with multiple voices speaking for the various characters. This could even be done in Hebrew. The introduction of different voices with different dramatic inflections would bring the event to life even if individual words are not understood.

Raising and dressing the Torah. 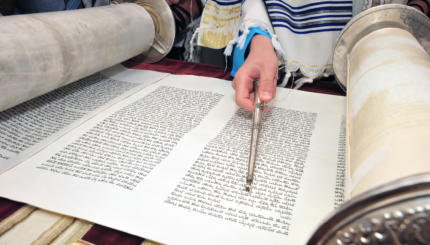 The Written Torah and the Oral Torah

According to Jewish tradition, two Torahs were received on Mount Sinai -- one written, and one passed down orally for generations. 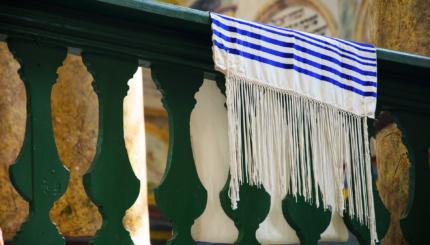 The internal and external structure of this carefully-crafted Psalm serves to reinforce its theme of praising God as the caring, divine ruler of all creation.