In the traditional wedding ceremony, known as kiddushin, the groom gives a ring to the bride, who accepts it but does not offer a ring in return. Today, a growing number of couples would like to have an actual exchange of rings under the huppah [wedding canopy].

In response to such a query in 1970, Rabbi Moshe Feinstein–one of the 20th century’s most eminent rabbinic authorities–ruled that a bride’s giving of a ring to the groom would not invalidate the groom’s properly executed kiddushin, even if done immediately afterwards (Iggrot Moshe, Even Ha’Ezer, 3:18). Nevertheless, he held that it was still impermissible to perform such a ceremony. Rabbi Feinstein’s primary concern was that to do so would be misrepresentative and mislead people as to what constitutes halakhic [legal] kiddushin.

In most cases, rabbis will also insist that the ring be given after sheva berakhot, the seven blessings toward the end of the wedding ceremony, so as to be performed well after the kiddushin has been completed.

As a result of this ruling, most Orthodox rabbis will not do a two-ring ceremony at all. Those rabbis who do agree to perform two-ring ceremonies insist that the bride give her ring to the groom in a way that makes it clear that it is not part of the kiddushin. Thus, the bride will not be allowed to say any kiddushin-like language, such as “Vearastikh li l’olam“–“I have betrothed you to me forever.”

Some rabbis will allow the ring to be given immediately after the kiddushin, but will make a clear declaration beforehand, along the lines of, “Now that the kiddushin has been completed, Rivka will give Yitzhak a ring as a symbol of her love and affection.” (See Joel Wolowelsky, Women, Jewish Law, and Modernity, p.68.)

I share Rabbi Moshe Feinstein’s concerns, and insist on similar parameters. However, this continues to marginalize the bride’s giving of the ring. One solution is for the bride and groom to exchange rings after the sheva berakhot and make mutual statements of love and commitment, in addition to the ring that the groom gives the bride as the act of kiddushin.

A more elegant solution is possible. The practice in Sephardic communities and in Jerusalem is for the groom to assume his ketubah obligations under the huppah, immediately following the kiddushin. This obligation is assumed through an act of kinyan (acceptance of ownership or responsibility), classically performed by the groom taking an object (often a handkerchief or a pen) from the officiating rabbi in the presence of witnesses. However, since the groom is obligating himself to the bride, it is actually more appropriate that the bride, and not the rabbi, give him the object. (See Shulkhan Arukh, Hoshen Mishpat, 195:1,3.) This object can be a ring.

This is how such a ceremony would look: Immediately after the kiddushin, the witnesses are called, and it is explained that they are to witness the bride giving a ring to the chatan, upon receipt of which the chatan will undertake his ketubah obligations to the bride.

The bride then gives a ring to the groom, stating: Tikabel taba’at zo vi’tihayev li bkhol hiyuvay ketubah zo k’dat Moshe v’Yisrael–“Accept this ring and obligate yourself to me with all the obligations of this ketubah, according to the law of Moses and Israel.” The groom accepts the ring, and the witnesses sign the ketubah.

Such a ceremony makes it explicit that the bride is not doing an act of kiddushin, but rather initiating the groom’s acceptance of the ketubah obligations. It allows for the bride’s giving of the ring to take place immediately after the kiddushin, to be done with significant ceremony (witnesses and the signing of the ketubah) and to play a central halakhic role.

The ketubah was originally instituted to make the woman more of an equal in the marriage, so using the ketubah to create a two-ring ceremony is particularly apt and in keeping with the spirit of the halakhah. 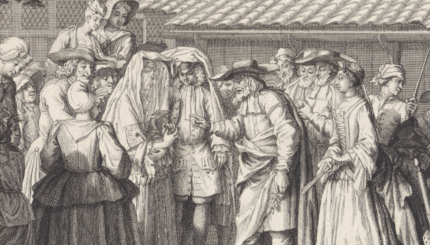