Developing a Relationship With Israel and the Holocaust

Excerpted with permission from Choosing a Jewish Life: A Handbook for People Converting to Judaism and for Their Family and Friends (Schocken Books).

There’s an old joke: A Jewish boy is about to leave for college when his father takes him aside and says, “Look, we’ve never been a religious family, but please, promise that you won’t go and marry a shiksa [a derogatory term for a non-Jewish woman].” The son promises.

During his senior year, however, he falls in love with a non-Jewish woman. After serious thought and study, she converts and they marry. The couple moves back to the son’s hometown, and he goes to work in his father’s business.

A few weeks after the couple has gotten settled, the phone rings in their home. The father is on the line, asking his son, “Where are you? We always go over the books on the last Saturday of the month.” The son says, “I can’t come. My wife says it’s forbidden to work on Shabbat [Sabbath].” To which the father replies, “I told you not to marry a shiksa.”

Sometimes, you just can’t win. Like when one young man told his Jewish in-laws that he had decided to convert, and their immediate response was, “Your poor parents!” In general, conversion tends to ease relationships with Jewish families, which view intermarriage with dismay, and any resistance to your marriage will probably crumble as tensions over the identity of future grandchildren are erased. If your conversion follows years of marriage to a Jew, the rest of the family may be overjoyed and throw you a big party. Then again, your choice may utterly baffle them and leave them unsure about how to react to you.

Regardless of the circumstances of your conversion, your Jewish family’s response will depend not only on your relationship to them but also on their own Jewish identity. If you are the first convert in the family, it’s likely that you will be a magnet for curiosity, questions, and comments that may seem extraordinarily rude.

Probably the most common offense against converts, usually committed without any malice, is the use of the words shiksa and shaygetz [a derogatory term for a non-Jewish man]. As in, “Here is Miriam’s husband, Matt, who used to be a shaygetz but converted.” Or, “This is my beautiful shiksa daughter-in-law, who is a better Jew than me!” Most Jews think that shiksa means “female gentile” and shaygetz “male gentile,” but in fact, those words are anything but neutral. They mean “abomination” and convey the fact that non-Jews were strictly forbidden as marriage partners.

While the offense is unintended, these words unconsciously reflect the belief that Jewishness is an ontological category–a status you’re either born with or not. More than a few Jews-by-choice have been hurt by the announcement, “I don’t believe in conversion. A person can’t just become Jewish.”

While the use of words like shiksa and the idea of an inborn Jewishness are rarely meant as insults to anyone in particular, Jews are not exempt from bigotry. Just as some non-Jews still believe that all Jews are stingy, some Jews harbor stereotypes about non-Jewish stupidity. It’s painful to find those attitudes among your extended family, but there’s no reason to let bigoted comments go unchallenged, “Oh, Al, I can’t believe you said that. My parents are non-Jews and you know they’re intelligent and hardworking people.…”

Whether or not it’s always a welcome role, converts often end up as teachers and role models for Jews as well as for non-Jews. Your presence complicates and disturbs a sense of reality grounded in a very different period of history–when Jews were Jews no matter what they didn’t do, and when gentiles could never become Jews, no matter what they did. If you–with your blond hair, or your black skin, or your Asian eyes–are a more knowledgeable, observant, and committed Jew than they are, then what does it mean to be a Jew in name only? Few people welcome such a serious challenge to their worldview.

Within your Jewish family, you and your partner may be the first Jews in a generation to light Shabbat candles or join a synagogue. While this may delight some of your relatives, it may cause discomfort, embarrassment, shame, or misplaced anger among others. Most Jews-by-choice try to minimize contact with the naysayers in their families and seek out allies.

But you can also open long-closed doors within your extended Jewish family; sometimes all it takes is a few questions. Ask your in-laws, or your wife’s aunt, where the family name comes from. From which cities or shtetls [small towns] in Europe did the family emigrate? Who was Grandpa Max named after? What does Grandma remember about her childhood Hanukkah celebrations? The information unearthed as a result of your questions can knit a family together–with you as an integral part of the emerging pattern.

Not all Jewish families react coolly to converts. Many families take the Jew-by-choice under their wing, opening homes and hearts, sharing traditions and recipes, handing down heirlooms. One woman says that her conversion took place not only in the mikveh [ritual bath] but also in the kitchen, where her Jewish mother-in-law and Jewish grandmother-in-law taught her how to make favorite family meals and welcomed her into the world of Jewish women.

Of course, there can be too much of a good thing, as when family members presume to tell you how to live your Jewish life. Your father-in-law may be horrified by your child-centered seder [ceremonial Passover meal] that substitutes a puppet show for pages and pages of the text he’s heard since boyhood. Your sister-in-law might inform you that membership in a Reform temple is tantamount to joining an Episcopal church. Then again, you might scandalize your relatives by refusing to miss Shabbat dinner and attend basketball games on Friday nights with the rest of the family.

As you establish your own Jewish home, and especially as you explore Jewish life through the eyes of your children, you will create traditions of your own. And your branch of the family tree will have an independent life, connected yet distinct. 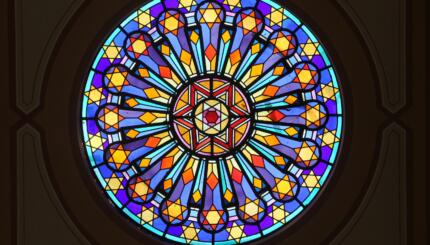 Is It Time to Convert to Judaism?

Because becoming a Jew is an evolving process.