Although the flood and the life of Noah occurred thousands of years ago, the story of Noah offers important lessons about how our actions affect the world. The Torah teaches that 10 generations after Creation, all life on the planet had “corrupted its way on the earth” (Genesis 6:12). God gave humans 120 years to improve their ways, using Noah and his ark as messengers. Yet the people ignored the message and missed the boat. Noah built the ark, brought the animals into it, and lived on it with his family for the duration of the flood. After Noah left the ark, God made a covenant with Noah, designating the rainbow as the sign of the Creator’s commitment not to destroy the world.

What provoked God to carry out the most serious environmental catastrophe in human history and wipe away virtually all terrestrial creatures? The Rabbis of the Talmud teach that the judgment was sealed because of the sin of robbery (chamas). Rabbi Samson Raphael Hirsch teaches that “Chamas [wrongdoing] is a wrong that is too petty to be caught by human justice, but if committed continuously can gradually ruin your fellow man.” Apparently, people in Noah’s generation went to the market and stole a peanut here, a raisin there. With no one being tried for stealing miniscule amounts, store owners suffer significant losses and may have to shut down. No one desires or intends to cause such an outcome. It occurs due to the small-scale misconduct of many individuals put together. In response to this human wickedness, the Master of the World intentionally destroyed almost all terrestrial life by flooding the earth.

Today, perhaps the greatest risk of humans destroying the world comes not from those with the intent to do so but rather from the collective, unintentional actions of billions of people. Seemingly inconsequential actions are having a dramatic effect. We are little by little compromising the ecological balance on which we and future generations will depend for our survival. For the first time in human history, we now have the ability to destroy or radically alter all terrestrial life.

Unlike the other people in his generation, Noah took responsibility by building the ark, bringing the animals into it, and taking care of them during the flood. According to the Midrash, a compilation of teachings from the Jewish oral tradition, “throughout those twelve months, Noah and his sons did not sleep, because they had to feed the animals, beasts and birds” (Midrash Tanhuma 58:9). The Midrash also notes how Noah brought a grape vine and fig clipping into the ark in order to replant them after the flood (Genesis Rabba 36:3).These teachings imply that Noah was committed to restoring life on a devastated planet.

The Midrash also teaches that Noah first sent a raven out of the ark to see if the floodwater had subsided. Being one of two ravens in the world, the raven argued with Noah, fearing it would die and then its species would be lost forever. In response, God told Noah to take the raven back into the ark (Genesis Raba 38:4). Noah then sent the dove, of which seven were in existence. Thus, the Midrash portrays Noah as preserving the diversity of life on earth.

Rabbi Samson Rafael Hirsch explains that this value of preserving diversity is a deeper meaning of the rainbow. The colors are symbolic of different types of living beings―the ‘red’ ones seemingly closer to the light, the darker ones more distant. Yet “God unites them all together in one common bond of peace, all fragments of one life, all refracted rays of the one spirit of God…” The rainbow, therefore, testifies to the diversity of life that God created.

Following the flood, God included the rainbow as the sign of a covenant, saying “I have set My rainbow in the cloud… the water shall never again become a flood to destroy all flesh” (Genesis 9:12-15). Nahmanides (12th century Spain) writes that the rainbow signifies an upside-down bow and serves as “a reminder of peace.” The feet of the rainbow are bent downward to show that the Heavenly ‘shooting’–a.k.a the torrential rains―have ceased. Rabbi Shlomo Riskin comments that the symbolism of the rainbow extends beyond God’s commitment and encompasses humans as well: the rainbow is a half-picture, lacking a second half to complete the circle of wholeness. God can pledge not to destroy humanity, but since He created humanity with freedom of choice, He cannot guarantee that humanity will not destroy itself.

The mystical tradition teaches that before creating this world, God created seven worlds and destroyed them. On many occasions the Creator destroyed the world He created. But not so this world. The rainbow testifies to the Creator’s intention for life on our planet to continue to exist. By emulating Noah, we can take responsibility for our actions and for all of creation, and help sustain life on planet Earth.

The Miraculous Nature Of Covenant

God's covenant with Noah showed him and us the possibility of transforming the human condition of loneliness into the miracle of connection. 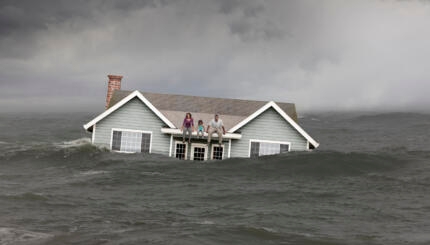 What Must We Risk?

As the floodwaters rise around us, the story of Noah’s Ark calls on us to ask: What does righteousness look like in our generation?