Fear, Perception, and Imagination: Grasshoppers in Whose Eyes?

Caleb son of Jephunneh, of the tribe of Judah, was one of the twelve men sent by Moses to spy the land of Canaan and report back about its cities and its inhabitants; to find out if they were strong or weak, few or many; and to bring back the fruit of the land.

The spies went and scouted the land–from the wilderness of Zin to Rehob, near the entrance to Hamath. Forty days later they returned to the camp carrying pomegranates, figs, and a branch that had a bunch of grapes on it so heavy that it took two men to carry it on a pole between them. Their report turned out to be disheartening and defeatist.

“We came to the land you sent us to; it does indeed flow with milk and honey, and this is its fruit. However, the people who inhabit the country are powerful, and the cities are fortified and very large; moreover, we saw the Anakites there. Amalekites dwell in the Negeb region; Hittites, Jebusites, and Amorites inhabit the hill country; and Canaanites dwell by the Sea and along the Jordan (Numbers 13:27–29).”

And they added, “The country that we traversed and scouted is one that devours its settlers. All the people that we saw in it are men of great size; we saw the Nephilim there–the Anakites are part of the Nephilim–and we looked like grasshoppers to ourselves, and so we must have looked to them (Numbers 13:32–33).”

Only Caleb, who was 40 years old, and Joshua son of Nun disagreed. They said (Numbers 14:7–9): “The land that we traversed and scouted is an exceedingly good land. If the Lord is pleased with us, He will bring us into that land, a land that flows with milk and honey, and give it to us; only you must not rebel against the Lord. Have no fear then of the people of the country, for they are our prey: their protection has departed from them, but the Lord is with us. Have no fear of them!”

The Israelites refused to listen to the encouraging words of Joshua and Caleb. They started to wail and cry. God punished their cowardice by condemning them to wander 40 years in the wilderness–one year for each day that the spies scouted the land–and to die in the desert. Caleb and Joshua were rewarded for their bravery by being allowed by God to come into the Promised Land and possess it.

Caleb had three sons: Iru, Elah, and Naam. He gave his daughter Ahsah in marriage to her cousin Othniel son of Kenaz–Caleb’s younger brother–as a reward to Othniel for having taken Kiriathsepher during the conquest of Canaan. Ahsah convinced her father to give her springs of water, complaining that he had given her away as “dry land”–that is, without dowry (Joshua 15:19).

The commandment of tzitzit (fringes) reminds us to enhance our vision with faith and see new possibilities. 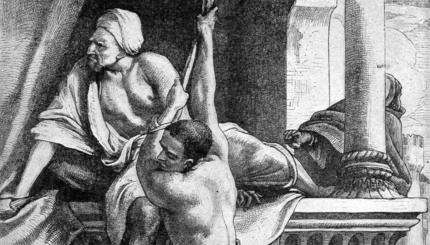