If you’ve been studying Daf Yomi for a while, you may have noticed something curious: Often, the final passage of a chapter of Talmud has seemingly very little to do with the subject of the rest of the chapter (or the tractate). This strange tendency puts me in mind of the Talking Heads’ line: “You may ask yourself, well, how did I get here?”

The mishnah that concludes chapter two of Tractate Beitzah is a case in point. At the bottom of today’s daf, we read:

A child’s wagon is susceptible to ritual impurity by treading. And this wagon may be handled on Shabbat. And it may be dragged (on the ground on Shabbat) only upon cloth.

Ah, it’s our old friend ritual impurity! Here, we learn that a child’s toy wagon is susceptible to impurity. We also learn that such a toy may be handled on Shabbat, but only dragged on the ground if there’s a cloth underneath it. We’ve actually seen this idea before, in Tractate Shabbat, where the rabbis discuss whether a wheeled cart can be dragged because it might create a furrow, typically a no-no on a day when farming is prohibited.

So, you may ask yourself, how did we get here? After all, the subject of both the chapter and the wider tractate is the laws of Jewish festival days — not Shabbat or ritual impurity.

Following the thread backward, we return to the previous mishnah, which addresses the possibility that a pepper mill can contract ritual impurity. From the discussion of one household item (the mill) we moved seamlessly to another household item (the wagon). And we got on the subject of the pepper mill because of the mishnah before that, which relates three rulings from Rabbi Elazar ben Azarya about the permissibility of various actions on Shabbat and holidays — one of which concerns a pepper mill.

Now that we know how we got to the matter of the child’s wagon, the more important (and interesting) question is: Why are we here?

I think the reason the rabbis use the example of a child’s toy is because it is so ubiquitous. Two millennia or so after this mishnah was written, most of us can probably picture a child’s toy wagon. Maybe it’s painted red and made of natural wood (or, God forbid, plastic). Maybe it has a handle that needs to be pulled. Or maybe it has a running board and a steering wheel that a child can operate herself.

Because it’s so familiar, it’s the perfect entry point into a discussion about the permissibility of playing with such toys on Shabbat and festivals. And indeed, a fascinating 2015 paper on the question of sports and exercise on Shabbat cites this mishnah while discussing the permissibility of riding a bicycle or a skateboard on Shabbat. In the paper’s summary, Rabbi Jonathan Lubliner affirms that enjoyment of Shabbat is a mitzvah — and as we have seen throughout this tractate, it is on festivals too.

These days, Shabbat and holiday prep in observant Jewish households the world over includes spiriting electronic toys out of sight. Figuring out which toys are suitable for use on holy days was a concern for the rabbis of the Talmud as well. And it’s no wonder: Shabbat and holidays are days when school and work obligations are suspended, so there’s finally time to play! Family and recreational time is just as important a feature of the holiday’s enjoyment as the food.

Wrapping up a chapter primarily about food preparation on holidays with a discussion about a child’s toy wagon is thus a logical conclusion — even if we took a convoluted route to get there. Same as it ever was.

Read all of Beitzah 23 on Sefaria.

This piece originally appeared in a My Jewish Learning Daf Yomi email newsletter sent on September 23rd, 2021. If you are interested in receiving the newsletter, sign up here. 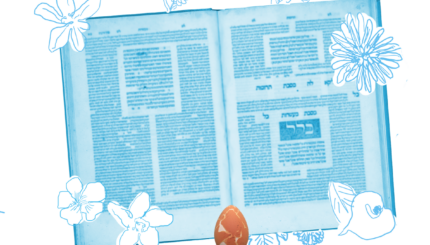 A different kind of eruv.

Divvying up the leftovers.