Kaufman describes traditional wedding customs, some of which may not be observed by many liberal Jews. In some communities, many traditional customs are retained, although they are practiced in more egalitarian ways.

The traditional Jewish wedding begins with separate simultaneous receptions by the groom and the bride for the wedding guests.

The bride’s reception is usually the livelier one. It is an old tradition, referred to in the Talmud, for the bride to sit on an attractive throne. Surrounded by her attendants, close family members, and friends, she receives guests and well wishers. As the musicians play, her friends dance in front of her.

The groom’s reception (Yiddish: hoson’s tisch) for men is held at a table laden with food and drink. Seated adjacent to the groom are his father and the bride’s father, surrounded by the rabbis. Around the table are male guests, relatives, and friends of the groom, who toast the groom and sing. [Today, many grooms opt to have female friends and relatives at their tish as well.] Often, the room in which the groom’s reception is held is where the late-afternoon Mincha prayer service takes place.

It is customary for a groom to deliver (or attempt to deliver) a learned discourse at the tisch (“table”). But traditionally he is interrupted by his friends shortly after beginning, with lively singing and rhythmic clapping in which all present join to prevent him from continuing. This custom is not intended as an affront or as an act of disrespect to the groom, but is designed to protect the groom who may be less than scholarly, lest he be shamed on what should be his most joyous day.

In many Hasidic circles, a badhan, or professional wedding jester, would be employed at the tisch to entertain the assembled guests, by toasting the groom in rhymed couplets sung in traditional tunes.

The most crucial procedure at the groom’s reception is the completion and validation of the ketubah, the marriage contract. The ketubah is carefully reviewed by the rabbi to determine that all details are correct.

The groom then formally accepts all the unilateral obligations to which he commits himself in the ketubah by executing a kinyan sudar, a traditional legal consent and agreement process. The officiating rabbi hands him a small article of clothing such as a handkerchief, and the groom, before two witnesses (who may not be close relatives of bride or groom), takes it and lifts it up symbolically to affirm consent, before returning it to the rabbi.

At the conclusion of this procedure, called kinyan, a scribe or the rabbi then adds to the end of the ketubah text the Aramaic word v’kanina (and we have properly concluded the legal act of transference), and the witnesses sign to affirm the groom’s acceptance, through the act of kinyan, of all the conditions of the ketubah document, thereby validating the ketubah. In some communities, it is customary for the groom also to sign it. 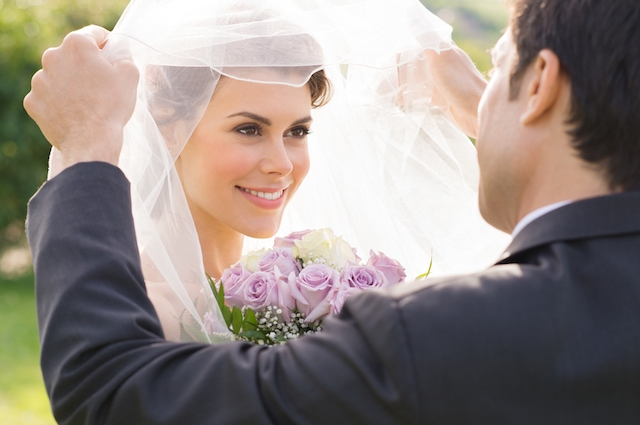 The groom is then escorted by his father and the bride’s father, the rabbis, the dignitaries, and the others in his retinue to the bridal reception area for the veiling ceremony, known in Yiddish as the bedeken (Hebrew, hinuma). Accompanied by his friends, who dance and sing in front of him, the groom leads the procession to the bride. He approaches the bridal throne and covers the bride’s face with a veil (Yiddish, dektich). He is then escorted back to the groom’s reception room by the men, to prepare for the huppah ceremony [the public marriage ceremony that takes place under the marriage canopy, or huppah].

The veiling ceremony dates back at least to early medieval times, and some find a reference to the custom in the Talmud. The reason for the ceremony is probably related to modesty; the veil symbolically represents the added level of modesty the bride is expected to adopt with her elevation to the married state. The Torah relates that when Rebecca saw her bridegroom Isaac coming toward her, “she took her veil and covered herself.” The bedeken ceremony thus recalls to all Jewish brides the matriarch’s gesture of modesty at seeing her bridegroom, inspiring them to emulate their biblical forebears and conduct themselves with an elevated level of modesty in their married lives.

Some ascribe the custom of the bride’s veiling to her position of centrality at the wedding, and the possibility that some men, undisciplined in their thoughts, might cast lustful eyes at her. The veiling accordingly underscores that, from this day on, the beauty of the bride is reserved for her husband alone to appreciate. Others see in the ritual a symbolic act directing attention away from the physical toward the spiritual at the wedding, constituting a public demonstration by the groom that his interest in the bride lies not in her beauty, but in the deeper, inner qualities of her character which, unlike her physical beauty, will not disappear in time.

There is also a rabbinic opinion that the tradition has a legal basis, as it symbolizes the groom’s public obligation to clothe his wife, and is thus a procedure which is an integral part of the legal marriage process.

In some communities it is not the groom, but the rabbi who performs the veiling procedure. When the rabbi veils the bride, he often simultaneously recites to the bride the biblical blessing that Rebecca’s handmaidens gave her: “O sister! May you grow into thousands of myriads.”

The tradition of Hasidim and some Oriental Jews, and the old Jerusalem community, is for the veil to be opaque, to assure that the bride’s entire face is covered for the wedding ceremony, so that she can neither see nor be seen.

Preparing for the Huppah

When he returns to his reception room from the bedeken, the groom is readied for the huppah ceremony by his attendants. As the groom, on his wedding day, is compared to a king, he does not don his garments as he does ordinarily, but is dressed by his attendants. The garment worn is usually a kittel, a simple white cotton robe.

It is customary for the groom to wear a white garment, a symbol of purity for this ceremony, to emphasize that this day is, for him, like Yom Kippur, when he is to repent, and be forgiven for all his sins. The prophet Isaiah declares, “If your sins are like scarlet, they shall become as white as snow. For the same reason the bride wears white. The white garments serve as a symbolic reminder to bride and groom that they must henceforth take care to keep clear of sin, thereby fulfilling Solomon’s directive in Ecclesiastes, “At all times take care that your garments be white.”

The white garments also signify that, apart from the commitment they make to each other on the day of their kiddushin [betrothal–the first part of the marriage ceremony], they are also making a solemn commitment to God to conduct their lives in an elevated manner.

The kittel the groom dons is also reminiscent of the white shroud he will wear when he dies. It thus serves as a poignant reminder on the happiest day of his life of the eventual day of his death. This pointed recollection of his mortality on his wedding day is designed to bring him down to earth, to underscore that henceforth he should pursue a life of meaning, and not one of empty, petty desires.

There are no pockets in the kittel. Just as the absence of pockets in a shroud indicates that a person takes nothing material with him when he dies, the groom, wearing a pocketless kittel that is compared to a shroud, is reminded of this at his wedding. It also serves as a pointer to the bride that she accepts him for what he is, and not for his possessions. For the same reason it is customary in many circles for the bride not to wear jewelry at the huppah.

The sages also see the kittel as a symbol that the bridal couple should view their marital bond as a lasting one, continuing until the day of their death.

In some circles, it is customary for the kittel to be worn under the grooms outer garments.

In many areas it is customary for the attendants of the groom to place ashes on the groom’s head at this time, in commemoration of the destruction of the Temple in Jerusalem. This is an ancient custom that is referred to in the Talmud. Some leave the ashes on only during the huppah ceremony, and remove them immediately thereafter.

Reprinted with permission from Love, Marriage, and Family in Jewish Law and Tradition, published by Jason Aronson Publishers.

Experiencing a child's wedding from a parent's perspective.